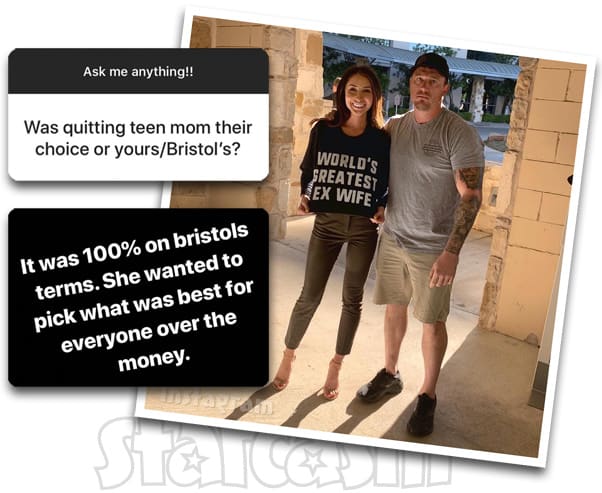 Bristol Palin officially announced that she would not be returning for another season of Teen Mom OG on Monday as she stated that the show “wasn’t a fit for me” and added that the experience “took away my peace.” The announcement comes after Bristol expressed her frustration with producers multiple times while filming her two seasons, a frustration that was shared by her now ex-husband Dakota Meyer. So, how does Dakota feel about leaving MTV behind?

“Amazing!!” he revealed during an Instagram Q&A session with fans. “I feel like I can finally close the last chapter and move on!” he added.

Another fan asked whose decision it was to quit — MTV’s or theirs. “It was 100% on Bristol’s terms,” Dakota said. “She wanted to pick what was best for everyone over the money.”

So, is there any second guessing about Bristol’s decision to leave all that MTV money on the table? “100% support that decision and I’m happy for her,” Dakota responded.

Dakota wasn’t the only Teen Mom OG star to respond to Bristol’s announcement. Her co-stars Maci McKinney and Cheyenne Floys also responded in the comments of Bristol’s Instagram post.

“Will definitely miss working with u pretty girl!” Maci wrote. “Definitely still have to get the boys together! Xoxo ?”

Bristol responded to Maci by agreeing about their boys: “Yes, absolutely!! ???”

“❤️ Wishing you all the luck and blessings,” Cheyenne chimed in.

“Thanks boo,” Bristol replied, “no more venting to you on Monday nights!! ??”

UPDATE – Amber Portwood has also responded to Bristol’s departure, although she did it by being defensive about someone else’s response on Twitter:

TWEET: I love that Bristol didn’t make threats about quitting she just quit she knew her families sanity was worth more and mtv just betrayed her horrible ladies need to learn to put their roots down and stop letting MTV make them look cra! @KailLowry @_mermaidbarbie @AmberLPortwood

AMBER: We actually know how to put our foot down very well indeed but this is something I saw coming a mile away. She’s an amazing woman with a great family but this is top 10 on the charts so more exposure. It sucks but the OG’s are still here. Good luck Bristol we’ll miss you hun❤

DAKOTA’S PAST CRITICISM OF MTV

Dakota being happy to move on from Teen Mom OG should come as no surprise to fans of the show. Dakota made headlines in early December when he shared his honest feelings about MTV and their parent company, Viacom. “What’s sad is that Viacom has turned Teen Mom into a trailer trash Real Houswives [sic] instead of showing what the true struggles of parenting are,” Dakota tweeted. He added that he would be sharing his own VLOGs to show us “what parenting looks like since they can’t seem to figure it out.” 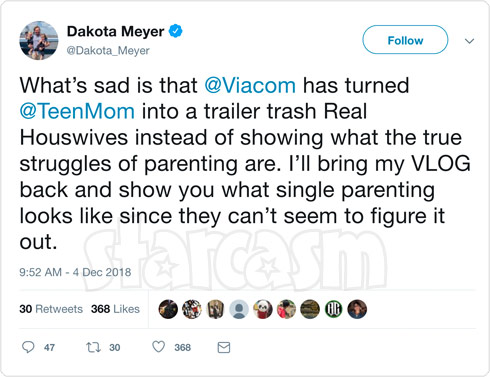 Personally, I was a fan of Bristol on the show. I’d say that her segments came in a distant second to the emotional scenes with Ryan Edwards’ parents as far as motivating me to tune in each week.

I should also mention that there are numerous clickbait articles suggesting that MTV will remain in Austin, Texas by bringing OG Farrah Abraham back for another season, but that has not been confirmed. I would have assumed that the amount of accelerant used by Farrah when she burned the bridge with MTV after being fired from Teen Mom OG would make rebuilding that bridge impossible. But, the network welcomed her back with open arms to appear on their series Ex On The Beach, so I suppose they might also be willing to invite her back to Teen Mom OG after booting her for the second time.

Meanwhile, it seems that Dakota and Bristol are getting along a little better. Bristol, a realtor in the Austin area, helped Dakota sell his house recently, and they both shared the humorous photo together featured at the top of this post after the closing. Bristol is sporting a “WORLD’S GREATEST EX-WIFE” shirt while Dakota stands beside her looking hilariously miserable.

Dakota also kept it extremely positive with his caption. “Getting along has never been our strong point but always trying to help each other out is something we have maintained (for the most part). I’m proud of @bsmp2 hard work and dedication to setting the example for my daughters. Go check her out @bristolpalinrealtor and if you’re looking for a realtor in Austin Texas she’s who you want.”

Bristol also revealed that she went so far as to give Dakota a closing gift basket that included a framed photo of her as well as a rustic painted sign that reads “I ♥ MY EX WIFE.” 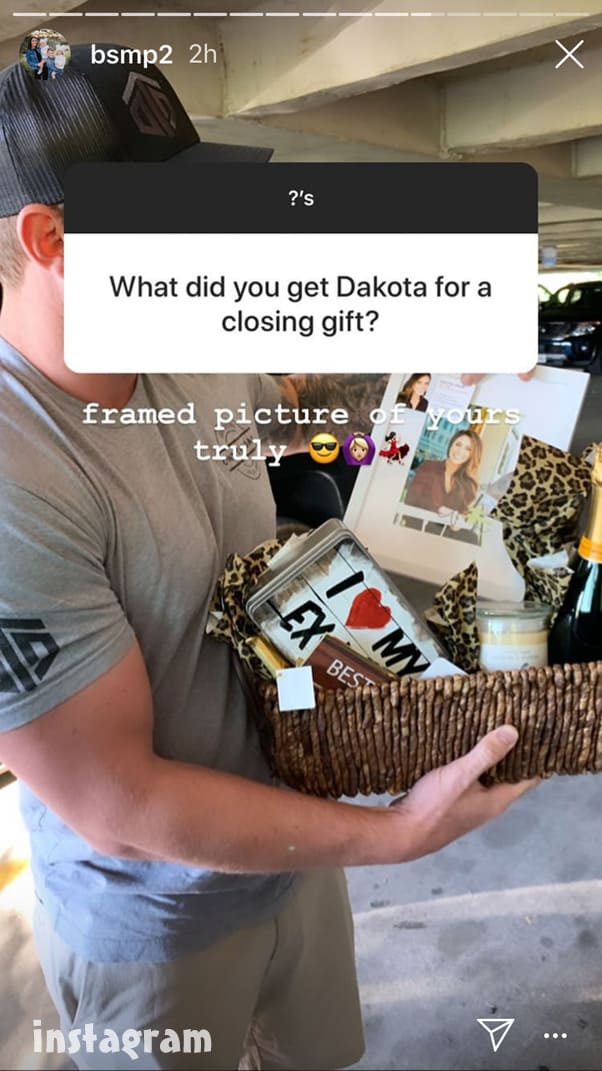 PHOTOS Teen Mom Amber Portwood moves out of her apartment, MTV films away