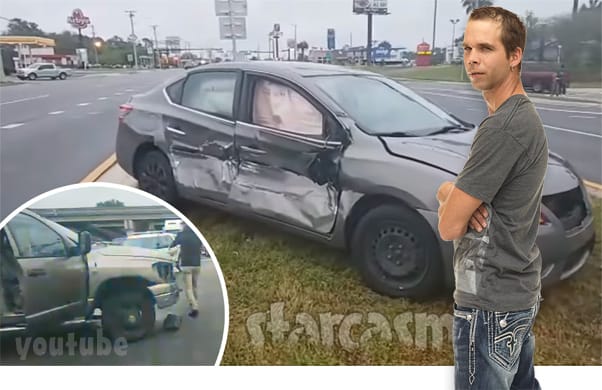 Breaking Amish and Return To Amish star Jeremiah Raber had quite the scare on April Fools’ Day as the truck he was riding in collided with a car that ran a red light in Florida.

Jeremiah did a live stream on YouTube moments after the accident happened. He assured viewers that “everyone is OK,” including the driver of the other car. Jeremiah added that he wasn’t driving at the time, and “was almost sleeping” when the accident occurred. He said everyone in the truck was wearing a seatbelt.

Jeremiah also revealed that his wife Carmela was not with him at the time, as she was at home with the kids. In the latter half of the video, Jeremiah was attempting reach Carmela on the phone to let her know what happened.

So what did happen? Jeremiah said that the driver in the other vehicle was “doing something with his sunglasses and missed the red light.” He also mentioned that the other driver, who is reportedly a police officer in training, admitted to being at fault right away.

Jeremiah used the police angle in the title for his video, “Police officer in training runs red light.” Here’s the full video:

The truck that Jeremiah was traveling in was towing a rather large camper, and I assume that this was the crew manning his Amish Donuts stand. According to the business’s Instagram account, the stand was set up in Ocala last weekend. The accident on Monday occurred in Lake City, Florida.

Jeremiah is no stranger to car wrecks. He and wife Carmela were involved in a very serious accident while Carmela was driving in Colorado in May of 2017. Thankfully, no one was seriously injured in that accident either.

I will get ahead of the inevitable question that a lot of fans will be asking, after they are sure Jeremiah and everyone else involved in Monday’s accident was OK. Are Jeremiah and Carmela still together? Is she in Florida too? I have to admit I don’t know the answer to either of those questions. Although the two are at least still on speaking terms, it’s unclear from their social media posts exactly where they are at — either in their relationship, or physically, as far as Carmela goes.

UPDATE – Jeremiah shared some photos from the scene that show the damage to both vehicles much more clearly than the video: