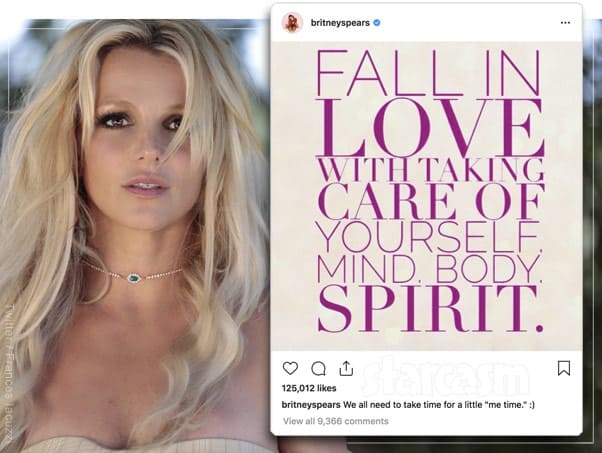 Multiple sources are reporting that Britney Spears checked herself into a mental health facility a week ago as she continues to struggle dealing with her father Jamie Spears’ medical issues.

Britney posted a text graphic moments ago on Instagram that reads: “Fall in love with taking care of yourself, mind, body, spirit.” She captioned the image by writing “We all need to take time for a little ‘me time.’ 🙂 ”

The post triggered a lot of concern among her fans, and numerous news sites began reaching out to their sources close to Britney for clarification. TMZ’s sources tell them that Britney “has been distraught over her dad’s illness … something we’re told is quite serious and not getting better.” They say that Britney checked into a facility about a week ago, and she plans to remain there for 30 days.

The Blast’s sources also say that Jamie’s health has taken a huge toll on Britney, adding that she “recently began to spiral out of control emotionally.” Their sources confirm that Britney has entered a mental health facility, but they insist that it is not a hospital.

Radar Online’s sources concur with those for TMZ and The Blast. They also state that Britney is not in a “conventional hospital,” but a facility in the Los Angeles area that “focuses on ‘wellness’.” Radar’s sources say that Britney admitted herself at the request of her dad. “Her father asked her to go, because she means so much to him,” their source said.

A source for People did not confirm that Britney was in a facility, but did say that Jamie’s health issues have been very difficult for Britney:

A source close to the family tells People exclusively that “Britney just needed to focus on herself” as she cares for her father Jamie after his “life-threatening” colon rupture.

“Her dad being sick has taken a toll on her,” the source continues. “He nearly died and actually had another surgery a few weeks ago. He’s not doing well. They’re so close and it has been a lot. There is nothing dramatic going on with her — she just realized she needs to make sure to take time to care for herself.”

Britney’s dad Jamie Spears’ health issues began in late 2018 when his colon spontaneously ruptured. Britney would later share an emotional post about her dad’s condition as she announced the cancellation of her new Britney: Domination show in Las Vegas. Here is the photo she shared on Instagram on January 4 along with her caption:

I don’t even know where to start with this, because this is so tough for me to say. I will not be performing my new show Domination. I’ve been looking forward to this show and seeing all of you this year, so doing this breaks my heart. However, it’s important to always put your family first… and that’s the decision I had to make. A couple of months ago, my father was hospitalized and almost died. We’re all so grateful that he came out of it alive, but he still has a long road ahead of him. I had to make the difficult decision to put my full focus and energy on my family at this time. I hope you all can understand. More information on ticket refunds is available on britneyspears.com. I appreciate your prayers and support for my family during this time. Thank you, and love you all… always.

While Britney receives treatment, The Blast reports that “Kevin Federline has taken ‘90% custody’ of the former couple’s two children, Sean and Jayden.” The site’s sources say that Kevin “is now considering heading back to court to ask for more money from his baby mama to care for the kids while she is away.”

We join millions and millions of other in wishing Britney and her family the best. I will close out this post with a photo that Britney shared on Twitter on her father’s birthday that was taken at her very first birthday:

Found this pic from my very first bday, having cake with my dad! Happy birthday daddy!! Love ya!! ?? #fbf pic.twitter.com/GBWE7BHdBF