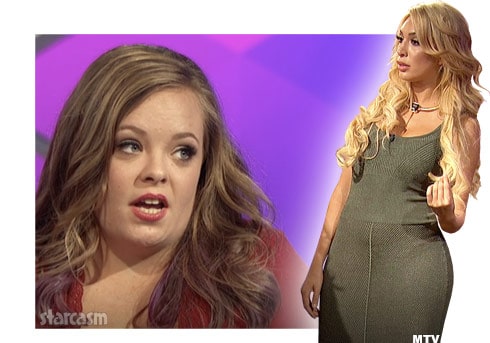 Farrah Abraham and Catelynn Lowell are tossing shade at each other via Twitter ahead of tonight’s Teen Mom OG Unseen Moments Special.

It looks like there’s still some hard feelings after Farrah challenged seemingly everyone following the Reunion brawl. Abraham took the following shot at Lowell and Amber Portwood last night. She even made sure to tag her daughter Sophia!

Amber&catlynn take notes on how to be a good mom & a full time mother you need all the help you can get. #proudmom @sophialabraham ❤️'s me pic.twitter.com/wJvhFswPrm

Catelynn caught wind of the attack on her parenting abilities and had the following response:

Huh so she thinks she's a better mom than me or @AmberLPortwood she's way more delusional than I thought! #thanksforthelaugh #takenotes

Amber Portwood didn’t directly address the situation but she did retweet someone who showed love for the OG TMs other than Farrah.

Farrah went all in during the round of interviews that came after the airing of the Reunion.  “They’re a joke. I hope that they’ve learned from their embarrassment. I’m moving on and the next season will be amazing, with or without them,” she told Too Fab of her co-stars Maci, Amber and Catelynn.