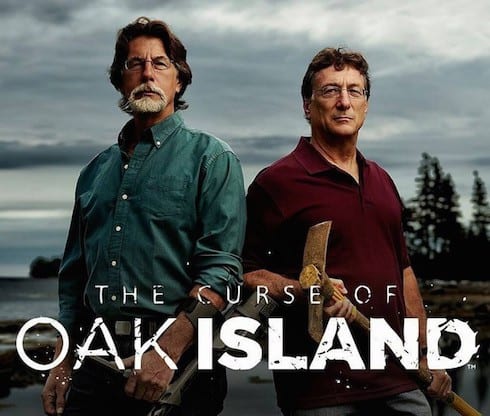 After months of speculation and weeks of waiting, we finally have it: History has confirmed the Curse of Oak Island Season 5 start date. According to the network, the Lagina Brothers will be back in action and ready for the most sarcastic comments their viewers can think up in less than one month!

Here’s the official news, courtesy of History itself:

Though there appeared to be unusually strong hesitation on Rick and Marty’s part following the Season 4 finale, an Oak Island producer all but confirmed that the show would be back earlier this year–and claimed that he could see the show going for an easy ten seasons.

Additionally, as we reported several weeks ago, multiple fan sightings of Rick Lagina in and around Oak Island this summer appeared to confirm that filming was underway. (To his credit, Rick appears to be extremely courteous when approached by fans; if he’s turned down a photo request or an opportunity to chat a bit, we’ve yet to hear about it. Say what you will about how the show drags out its secrets–and doesn’t always pay them off–but Rick is a true gentleman about appearing on social media.) And at least one member of the Oak Island production team used his Instagram page to reveal he was editing new episodes of the show.

Of course, now that we have a Curse of Oak Island Season 5 start date, gossip about what the Lagina Brothers’ dig might actually uncover is already rife. And we’ve shared more than a few not-so-subtle Twitter digs at the tried-and-true Oak Island formula in the past–something that we fully intend to keep up with this season 🙂 But it’s also worth keeping in mind something Rick has been saying for years: as far as he’s concerned, it really is about the journey–the dig itself–and not any treasure that he and Marty may find at the end of it.

Make sure you tune in for the Curse of Oak Island Season 5 start date when the show returns on Tuesday, November 7 at 9 PM on History.

No, seriously: Is Masika Kalysha still on LHHH?