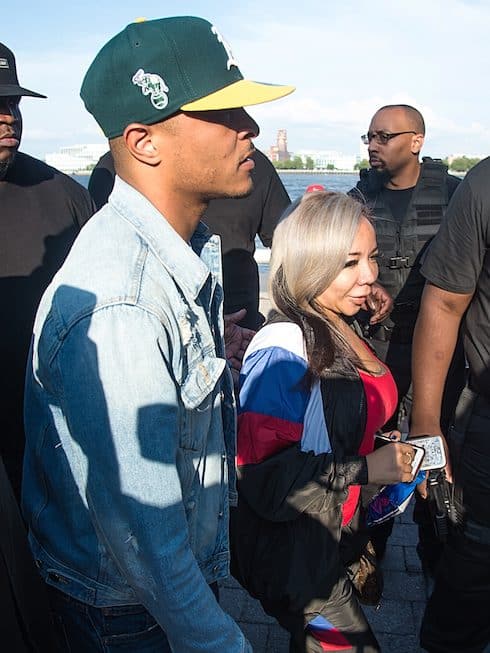 It turns out that reports of TI and Tiny together again, far from being rumor, are actually legit. Though not in the sense that you might expect: it seems VH1 has done a complete about-face and decided to renew TI & Tiny: The Family Hustle for a seventh season, which has already wrapped filming. The surprise renewal comes over a year after VH1 canceled the show following a greatly reduced sixth season.

TI & Tiny are back together…for reality TV purposes, at least

The news comes via the Atlanta Journal-Constitution‘s venerable Radio and TV Talk blog. They were the first to reveal that, per the state of Georgia’s Department of Economic Development, TI & Tiny: The Family Hustle is in the middle of producing a seventh season in the state.

According to their article, a Department spokeswoman confirmed that TI & Tiny “began shooting last month and will conclude at the end of this month.” As the AJC’s article was published in August, it looks like filming for the Georgia portion Family Hustle Season 7 covered both July and August of 2018.

TI’s current show, The Grand Hustle (airing on BET), began filming in Atlanta last month and is expected to wrap production on its new season by the end of September. So, if you’ve been hoping for an extra dose of the rapper’s reality TV presence, you’re in luck, as T.I. will have two shows on the air in 2019.

It’s also worth pointing out that the only real reason The Family Hustle went off the air in the first place was because of what looked like TI & Tiny’s imminent split. While that may *sound* like a really good reason for the show to conclude, TI & Tiny’s ratings — the only thing that ever truly determines whether or not a show stays on the air — were solid through and beyond their December 2016 split.

Season 5, the final complete Family Hustle season to date, averaged about 1.5 million viewers per episode. That’s about as many as network mainstay Basketball Wives and considerably better than Black Ink Crew Chicago, which just finished airing its longest and most successful season to date. And Family Hustle‘s ratings were even higher for Season 6, though that season was only eight episodes long due to TI and Tiny’s divorce filing.

To make a long story short: there’s still plenty of interest in the couple. And with TI and Tiny together again, their show could be back on the air indefinitely.

TI & Tiny still have to figure out the reality TV game

One problem the couple has yet to solve is balancing their private lives and the intrusion of reality TV cameras. A year ago, Tiny went on The Wendy Williams Show and had this to say when Wendy asked if Tiny thought “reality TV was the jump off for the troubles in your marriage”:

I think reality TV did, you know, put a little strain in it. Just because it keeps people in your business….I felt like, you know, [ours] is a family show, it would be cool. But it just feels like everything, you know, turns out to be in the media.

Two years after the divorce filing, reality TV still “keeps people in your business,” and everything still “turns out to be in the media.” (Like this report on the couple’s show being brought back from the dead!) Hopefully, TI and Tiny can find a way to keep the private parts of their lives totally private this time around.