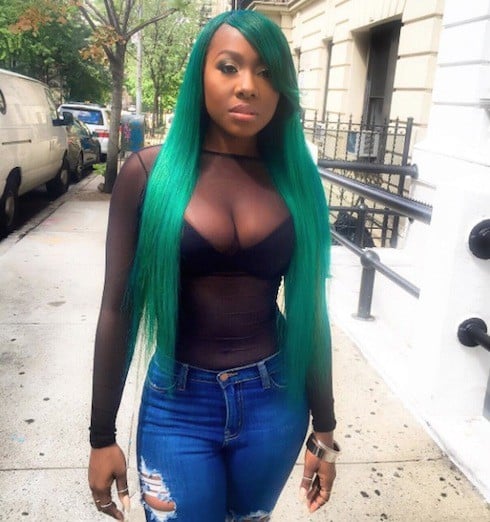 The Bianca Bonnie Love & Hip Hop drama is back, now that the still-new reality TV queen has been bumped up from supporting to main cast member for LHHNY Season 7. Bianca has a string of minor, yet significant hits on her resume, and is looking for bigger and brighter things now that she’s teamed up with manager Yandy Smith-Harris. But, much like with Yandy, Bianca’s love triangle drama might derail her efforts.

The 25-year-old Bianca went by Young B back in the day when she recorded what might still be her best-known hit. “Chicken Noodle Soup” (w. Webstar) won a Soul Train Award, put Bianca on the map at just sixteen years of age, and sparked a brief dance craze to boot:

A decade later, Yandy Smith-Harris might be her manager–but Yandy has her own drama to deal with, now that Mendeecees’ baby mamas Samantha Wallace and Erika are plotting to bring her down with an intricate web of lies. And Bianca has her own love triangle to deal with: while LHHNY Season 7 was filming, she was reportedly in a “dating arrangement” with both Marcus J. and Drake. Marcus has denied the rumors, but it appears that no definitive answers ever emerged, so we might get a more helpful look at what really went down with the new episodes.

Bianca’s current project, just-released album The 9th Year, is raising eyebrows in large part thanks to its hit single MTV, featuring Rotimi (who currently plays Dre on Starz series Power). The two are allegedly an item, but, again, it doesn’t look like either one has much to say on the topic, so we may have to wait for Love & Hip Hop‘s late-season episodes (or some spilled tea along the way) to get the truth.

You can follow Bianca on Twitter here, on Instagram here, on YouTube here, and on Facebook here. She’s nothing if not a frequent social media user, which means fans should get set for plenty of high-profile updates now that LHHNY Season 7 is set to begin.

Juelz Santana and Kimbella both returning for LHHNY Season 9