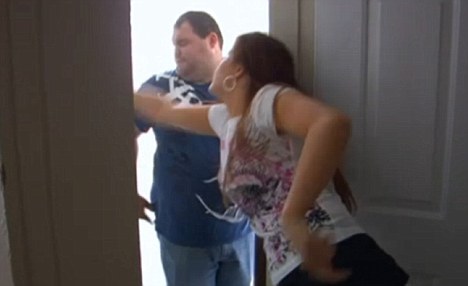 Amber and Gary, the troubled couple from Teen Mom who are already involved in a domestic violence investigation in Anderson, Indiana, got into another physical altercation early Wednesday morning that resulted in police coming to their Gary’s house and escorting Amber back home.

According to reports, Gary was texting a male friend who Amber suspected to be a girl, which upset her. Gary walked outside, and Amber, who was wearing her underwear, followed, threatening to physical hurt him (as she has done in the past.) Gary then went back inside, and pushed Amber to keep her outside while he shut the door.

Amber told police that she was “stressed” about her domestic violence investigation launched because of footage of her punching and kicking Gary that aired on MTV’s Teen Mom. No word on where their two-year-old daughter Leah was during this incident, but it’s clear that there has been no improvement in their cycle of abuse despite national and worldwide scrutiny and apologies, a police investigation, and therapy (including public therapy from Dr. Drew).