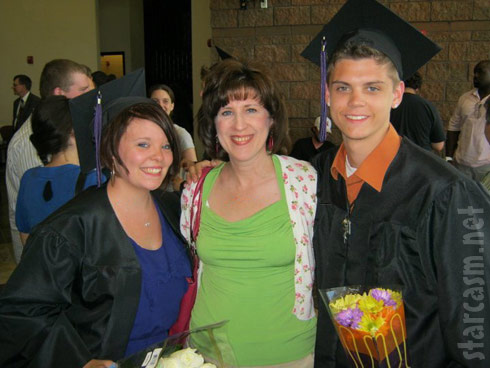 Happy news! The immensely lovable 16 & Pregnant, and Teen Mom stars Catelynn Lowell and Tyler Baltierra (pictured above with their adoption counselor) graduated from high school on June 5th. Catelynn’s grandmother even bought her a computer for graduation. They’ve had a rough go of finishing school after they gave up their daughter Carly for adoption. They struggled with complex emotions associated with that process, and still had to deal with unstable family conditions at home.

They have a complicated family: Tyler’s dad Butch is now married to Catelynn’s mom April, and has been in-and-out of jail and rehab all of Tyler’s life. During Teen Mom Season 2, we witnessed Butch go to a court-ordered rehab to treat what he said on camera was a cocaine addiction. Having Butch gone made Catelynn’s mom extremely irritable, and Catelynn’s grades seemed to suffer as a consequence of all the strife at home.

C & T, who got engaged at the end of Season 1 of Teen Mom also went through a bit of relationship drama on camera when Tyler found out Catelynn was lying about talking with an old flame. They also had communication issues over dealing with their grief, and almost broke up. They made it through, and they’re still together, still engaged, and going strong. Now that they’ve graduated high school they can set their goals on college.

Eventually Catelynn and Tyler plan to get married, settle down, and have more children. Right now Catelynn wants to be a grade school teacher, and Tyler wants to be a child psychologist. On the promo for the new season, which starts July 5, they consider moving in together, but we’re not sure if that actually happened. Catelynn lived with Tyler and his mom for a brief time after the birth of Carly

They’re also set to appear on an adoption special with Dr. Drew that also features 16 & Pregnant‘s Ashley Salazar, who gave up her baby to her aunt, and wrote a book about her roller-coaster adoption experience.

Click here to see the adoption video for Brandon and Teresa, the couple who adopted baby Carly.