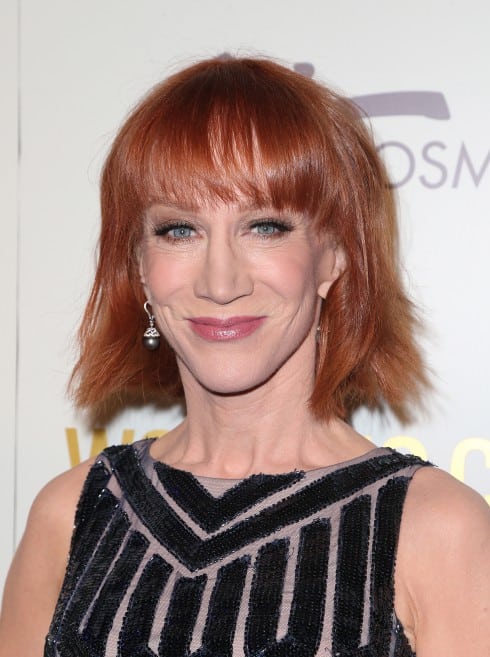 Kathy Griffin is facing harsh criticism for a recent photo shoot she did with famed photographer Tyler Shields in which she is holding a lifelike model of President Donald Trump’s severed and bloody head.

TMZ posted a “Behead the Scenes” video from the photo shoot in which Kathy can be heard joking with Tyler about needing to move to Mexico once the photos are released or otherwise they might have to go to federal prison.

Tyler continued the joking on Twitter and shared a graphic image from the shoot:

Friend text me this "I hear Tijuana is beautiful this time of year."https://t.co/JsP1paLxjB

Not long after video and images from the shoot were posted online, Kathy was inundated with a social media firestorm condemning her for the photo.

Eventually, Kathy issued a public apology and called for the picture to be taken down. In her apology, Kathy reminded everyone, “I’m a comic,” but admitted she “crossed the line.”

I am sorry. I went too far. I was wrong.

It’s still unclear what the intended use of the photos was — whether they were to be featured in a magazine, on a website, or “just for fun.” Perhaps it was to be the cover of Kathy Griffin’s next book? Who knows?

Numerous celebrities have taken to Twitter to share their disapproval of Kathy’s comments, including many outspoken Donald Trump detractors. Here are some samples from folks like Anderson Cooper and Chelsea Clinton:

For the record, I am appalled by the photo shoot Kathy Griffin took part in. It is clearly disgusting and completely inappropriate.

.@kathygriffin I'm sorry but that is totally inappropriate and so very offensive. And I have to believe you're smart enough to know better.

This is vile and wrong. It is never funny to joke about killing a president. https://t.co/zIiuKoMyFw

Of course Trump’s camp disapproved of the photo as well:

Disgusting but not surprising. This is the left today. They consider this acceptable. Imagine a conservative did this to Obama as POTUS? https://t.co/QdghcbIjS7

I think we may have finally found something both Democrats and Republicans can agree on: the photo shoot was too much — even under the guise of trying to be funny.

VIDEO Donald Trump controversy: Refuses to correct man who says President Obama is a Muslim and ‘not even American’