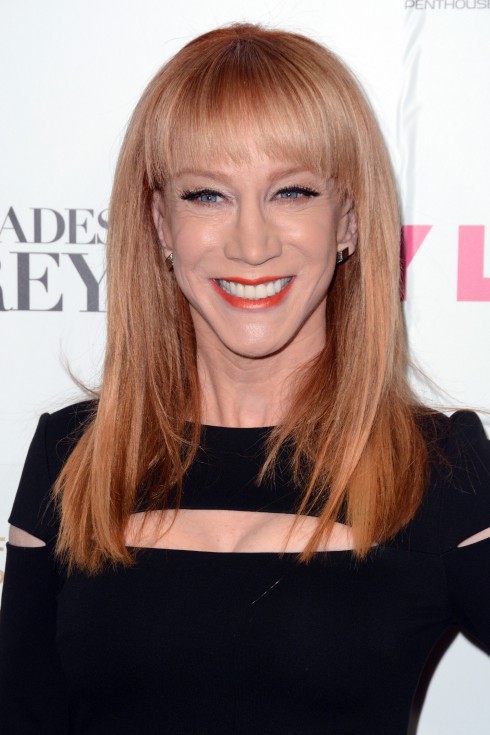 After joining the panel on E!’s Fashion Police and taping just 7 episodes, Kathy Griffin has quit the show. The comedienne posted a message earlier today on Twitter announcing her departure. Kathy describes her professional aspirations and how they don’t align with E!’s “creative direction.” Here’s an excerpt:

I am a freedom-loving female and gay rights activist who loves to find the funny in all people, attitudes, beliefs, and appearances, but only when the context permits intelligent humor. I thought I could bring my brand of humor to Fashion Police so that the beautiful people in beautiful dresses could be teased when appropriate. My brand of humor, while unrepentant and unafraid, is all about CONTEXT. There is plenty to make fun of in pop culture without bringing people’s bodies into it. …. But I do not want to use my comedy to contribute to a culture of unattainable perfectionism and intolerance towards difference. …. After seven episodes of Fashion Police, I discovered that my style does not fit with the creative direction of the show and now it’s time to move on. 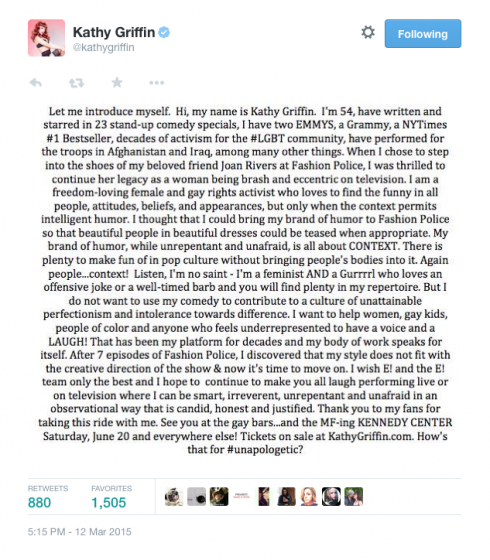 News of Kathy’s departure is coming just 2 weeks after it was announced Kelly Osbourne would be leaving the show. Kelly’s exit from Fashion Police stemmed from Giuliana Rancic’s comments about Zendaya’s hair at the Oscars. Could Kathy have felt the same as Kelly? 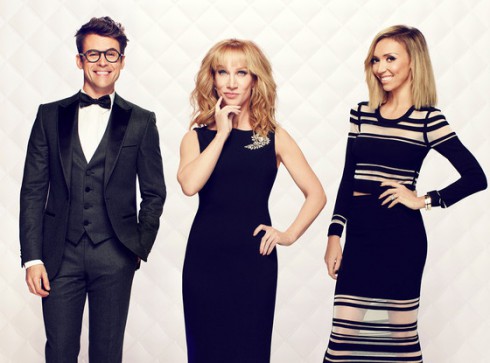 What’s interesting is that both Kelly and Kathy are known for being brash and unapologetic when it comes to their commentary. Apparently they have a certain tolerance for humor and feel as though E! is pushing the boundaries. It makes you wonder what’s going on behind the scenes.

Since Kathy’s announcement, E! has confirmed the news.

We wish her all the best and are grateful for her time on the show, as well as the many laughs that she gave us all. Fashion Police will return, as scheduled, on Monday, March 30 at 9 p.m. with our talented co-hosts Giuliana Rancic and Brad Goreski and executive producer Melissa Rivers. No further information is available at this time.

Neither Giuliana Rancic nor Brad Goreski have publicly commented, but Kelly Osbourne has come out in support of her friend tweeting, “I could not be more proud of you @kathygriffin you have my love and support always.” 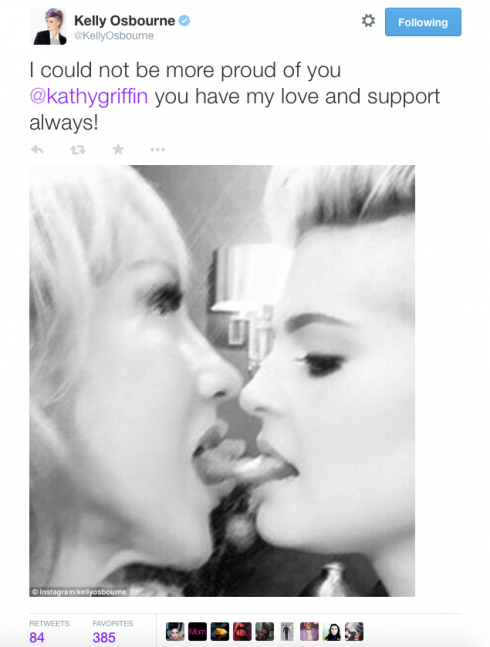 Prior to Kathy leaving the show, a number of stars expressed interest in joining the panel including Khloe Kardashian, Nene Leakes, and Porsha Williams. Now that TWO spots are open, it will be interesting to see how E! proceeds.

Why do you think Kathy Griffin quit Fashion Police?