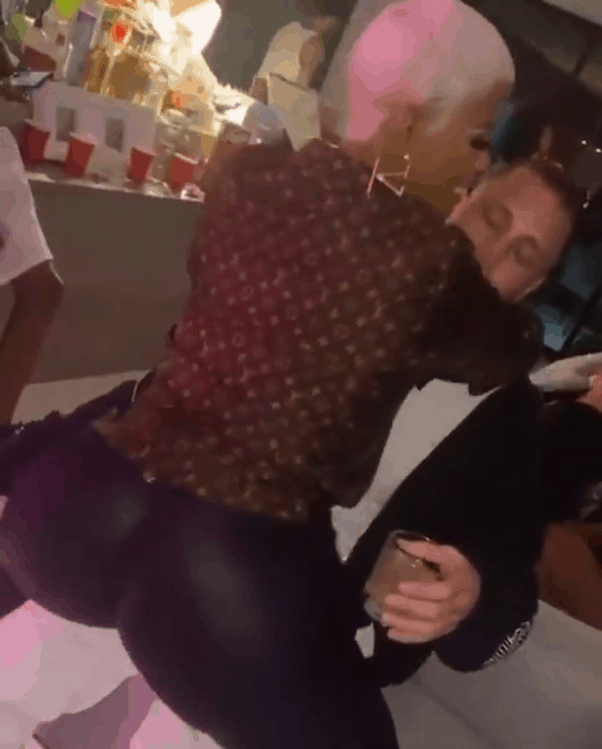 Based on this viral twerk video, it sure looks like Chet Hanks and Akbar are having a good time. But are they actually dating? And what does Akbar have to say about the abuse allegations one of Chet’s exes just filed against him in a Texas court?

First off, the video in question. A few days back, Akbar herself shared this clip, which features the loud and rowdy Love and Hip Hop Atlanta star giving the 30-year-old Chet an impromptu lap dance in the middle of what looks like a restaurant.

Chet, whose choice of language is not always the greatest, is actually speechless in the clip. Unless, of course, you count booty smacking as a language (and indeed it kind of is!).

On the other hand, if you don’t want to see what Chet “Pale Patois” Hanks looks like when getting twerked on, now’s your last chance to look away.

With that, here’s the Chet Hanks and Akbar twerk clip in all its…glory?

Now — far be it from us to declare that one energetic twerk doth a couple create. Far too many wide-eyed strip club visitors have had the same naïve thought.

But there’s a second video to consider. Filmed the same night, it’s of Akbar and Chet spitting freestyle. And we understand if the thought of that actually offends your sensibilities far more than any twerking.

As of this writing, neither Chet nor Akbar has commented publicly on any potential relationship. We’re inclined to believe it was just a good time between casual friends.

It might be a long white boy summer, though, so stay tuned for developments.

And speaking of those, Akbar may want to hold back on any more PDA for Chet. His ex — with whom Chet apparently shared homes in both Texas and California — has filed a “protective order” against him, due to alleged continual abuse.

Per KTRK in Richmond TX, the unnamed woman’s two lawyers

claim Hanks assaulted their client while they’ve been in a relationship. They pointed at examples of the alleged abuse, including an incident last October when she visited Hanks in New Orleans while he filmed a TV series.

The protective order also points at an incident in Sugar Land back in January that led her to contact authorities and file charges against him.

…”Chet Hanks has repeatedly been seen abusing our client and needs to be held accountable for his actions, regardless of his family and their name recognition,” her attorneys said in a joint statement.

Chet’s attorney’s response was to call the claims fake news and file a countersuit. Chet himself has yet to say anything about his ex-girlfriend’s suit.

Like the salmon of Capistrano, Property Brothers gay rumors have come home to spawn once more