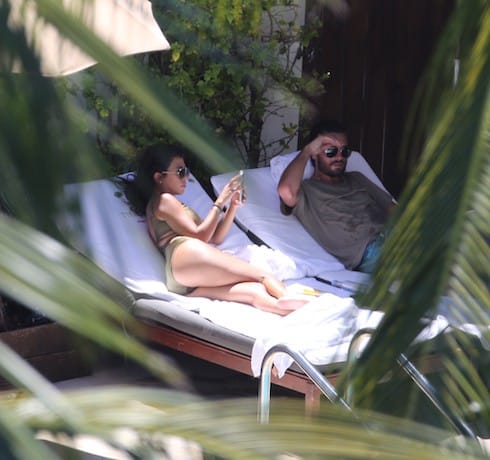 It looks like Kourtney Kardashian and three-time baby daddy Scott Disick might have finally patched things up, almost a year to the day after their breakup. According to a handful of separate reports, Kourtney and Scott have been getting it on on the regular–when they’re not working their problems out in high-intensity couples therapy sessions.

Kourtney broke things off with Scott last October, shortly before he checked himself into rehab for the fourth time. Since then, it’s been alleged that Scott has spent most of his time either trying to win Kourtney back; trying to forget about Kourtney by dating a series of increasingly younger women; and trying to convince his fans that there are no rehab-inducing temptations to be had at the Las Vegas-based nightclub Disick reps via regular paid appearances. But, in addition to a tumultuous history, Kourtney and Scott do share three children, which might be why she apparently decided to go back to him and to maybe possibly try for child #4 with him.

A new Inquisitr report has it on good authority that “Kourtney Kardashian is trying to get pregnant with Scott’s baby.” The report also cited an Us Weekly dispatch in which Scott reflected on the current tone of he and Kourtney’s relationship, and deemed it satisfactory. “I don’t think anything is ever simple,” Scott admitted. “[But] I’m not the first person in the world to get separated from their significant other. There are things we both have to work on….We’re at a good place.”

Part of the reason for Scott’s newfound optimism might be the couples therapy sessions he and Kourtney are supposedly deep into. A Wetpaint report on the topic claims that the pair is “making it work” thanks to therapy; per their insider, “Kourtney knows that by doing therapy sessions together and with the kids, she will get to have what she has wanted all along, a family life with him in it.”

The insider further explained that “Scott has straightened himself out a lot. He still goes to regular sessions with his own therapist and has made a lot of progress….Kourtney and Scott have finally gotten to a place where they can both be completely honest about everything. And it is totally obvious to them now that they are meant to be together, so they just have to do whatever it takes to make it work.”

(Photo credits: Kourtney and Scott back together via Instagram, Splashnews.com)