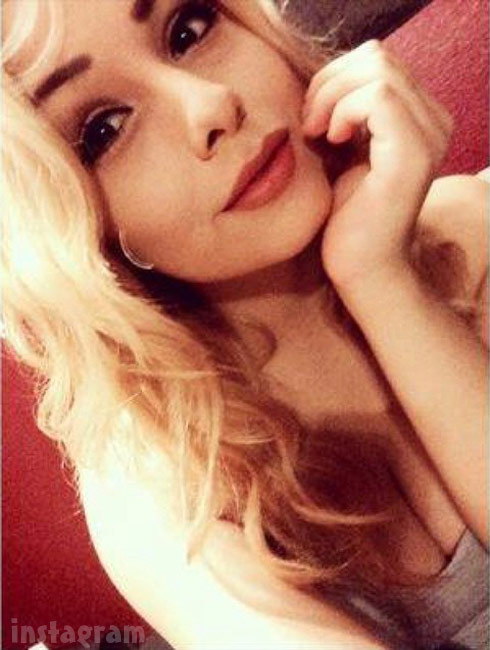 On tonight’s episode of Catfish we have the first instance of a mother sending in an application on behalf of her child as Aurora explains her son Steven is in a serious online relationship with a girl he’s never met named Samm. But, Samm is claiming on Facebook that she was the one that actually applied to be on the show, and that after producers saw her photos, they decided she would be the better catfish!

First off, here’s a preview clip from the show, which is essentially the first few minutes of the episode:

And here’s the “What We Know” about Samm and Steven photo posted by show producers this week: 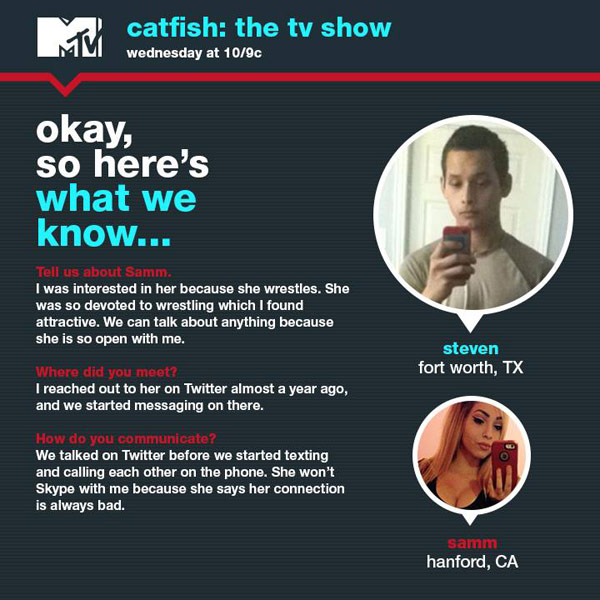 Samm, actual name Samantha Chocano (though she does go by Samm), has been posting excitedly all week about her episode airing tonight, but she was also worried about how MTV changed things around and that the changes will make her seem like an unpleasant person.

A commenter asked if MTV was making her out to be the bad guy and Samm explained, “I actually sent in the application for Catfish, but they twisted the story around because ‘my pictures are pretty enough to seem fake,'” she wrote. “So yes, they made me the bad guy. Just keep that in mind,” she added along with smiling and laughing emoji.

Yeah they made me the bad guy even tho i was the one who wanted to know if i was being catfished in the first place.. Gunna get alot of haters because they make me out to be a huge bitch.. But its not the truth

I sent in an application to catfish to see if steven was catfishing me. Once mtv got their hands on my story they said my pictures looked good enough to seem fake, so they twisted the story and made me the catfish/bad guy.

“Sooo the mom never wrote that email?” a commenter asked. “They made it up.?. Lol. I’m confused!..” Another commenter added, “Oh wow. So did they tell u they were going to switch the story around. Or they just did it without telling u.”

“They did it last minute,” Samm responded.

Using my Nev and Max virtual detective skills I have determined that the Samm Chocano Facebook page is indeed legit. She’s been posting since 2010, including photos used on Catfish posted prior to the preview airing. Plus, the unalterable url is www.facebook.com/samm.chocano. Also, Samm has an Instagram and Twitter account under the same name with lots more photos and videos that are clearly the same person.

As far as fans’ (and Nev’s) speculation that Samm may be a guy because of the name and the fact that she claims to wrestle, that COULD NOT be further from the truth: 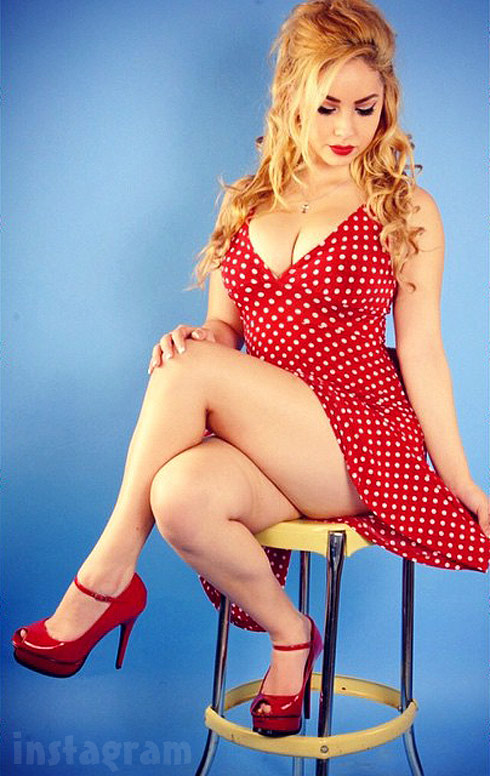 And just in case you needed some verification of her wrestlin’ skills, just Google “Samantha Chocano” or check out her Instagram account with lots of throwback clips like this one in which the then-brunette Samm pins her competition handily while wrestling for Sierra Pacific High School:

What’s odd is that there will be a Chatfish after tonight’s episode, but Samm actually flew out to New York last month. Aren’t the after shows usually recorded live? But then again, I guess they wouldn’t want to risk having Samm on for a live conversation!

Even if the scripts were flipped, tonight’s episode of Catfish looks like another fun one! Be sure to check it out at 10/9c on MTV. And you’ll want to hang around for Chatfish, not just because it will feature Samm and Steven, but also because it will be co-hosted by hilarious Catfish superfan Charlamagne Tha God!

UPDATE – Samm did an interview with Catfish Fans in which she talked at length about the plot switcheroo as well as a number of other things, like what she’s been up to since the show and what it was like to actually wrestle Steven! Here’s her synopsis of how she and Steven met and how their relationship developed:

And here’s my real story on how everything lead to Catfish: a year ago, I had just gone to girls wrestling state championship. I lost my final match and it was the most devastating thing ever. I went on Twitter and tweeted how sad I was, then I get a message from a random guy asking if everything is okay. Most guys message me saying “hey lets chill” or “your hot hmu”, so for a guy to ask me about how I’m feeling, was different. So I replied and gave him my number. He texted me and he told me he was a wrestler so for a week straight we texted nonstop about wrestling! We started to get to know each other. But in the midst of all that, I got back together with my boyfriend of 4 years. I told Steven about him, and I would tell him what went on. My boyfriend of 4 years started to get abusive… hitting, kicking, throwing things, choking, and almost having me go to the hospital. I would tell Steven about these incidents on a daily basis. Steven hated it so much, and I hated to disappoint Steven by being with such a horrible person… So eventually I told Steven that I broke up with him. But it wasn’t true. I stayed with my boyfriend for two more months until I couldn’t take it anymore. We broke up on Valentines Day 2015. I did tell Steven when we filmed Catfish. But the catfish story they aired isn’t close to what the true story is. Me and Steven have always been best friends and not really romantic. And that’s why on the show I said we were friends but they made it seem like a horrible thing, but I expect to be best friends with him for life. 🙂

Click the link above to read the full interview!

PHOTO Bachelor spoilers 2015: Who is Chris Soules engaged to?

BEFORE THE 90 DAYS Did exotic dancer Marta’s legal issues prevent her trip to Algeria? SPOILERS