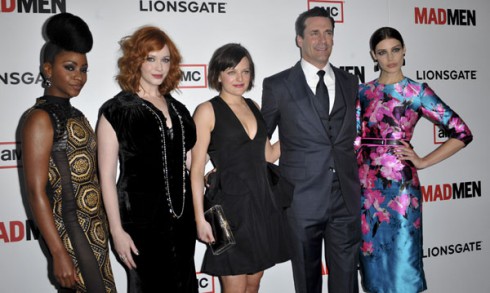 Don fakes his own death! Pete kills Don! Betty commits suicide so her kids can collect double the insurance money! Stan smuggles Peggy into Mexico in his beard! Matt Weiner drops a couch on Don, cackles “Winning!”, and does a shot of bottom-shelf vodka!

There are plenty of theories going around about how Mad Men will finish its run. The drama airs its final episode this coming Sunday, and speculation about the fates of each character–and about Don Draper’s in particular–have been rampant ever since the first half of season seven premiered last year.

We know, from years of long hunting, that Mad Men spoilers are the most difficult to get hold of in all show business. That’s because, as we now know, the producers threaten career-ending lawsuits to anyone with loose lips. There’s very little hard information to go on. There are, however, plenty of theories–some of them quite interesting.

One of the most popular and persistent is that Don is actually legendary airplane hijacker D.B. Cooper. Cooper is still the only person ever to pull off a successful hijacking within American airspace; he did so right around the time it looks like Mad Men will bow out. All authorities have had to go on for years is a police sketch (one that looks a little bit like Don), and some packets of the money Cooper extorted before jumping out of the plane mid-flight. It seems unlikely that creator Matthew Weiner would end his show in such a dramatic and out-of-nowhere fashion, but Cooper’s flight into anonymity does keep with Don’s under-the-radar tendencies.

Another, forwarded recently by Uproxx writer Dustin Rowles, is that Don is actually about to live out the rest of his days in Italy. It kind of makes sense: Betty is effectively dead, and Henry Francis will not get her three children. Don’s about to have to take care of all of them. There were a lot of subtle references to Italy in last week’s episode; Don and Betty spent their happiest time before their divorce in Rome back in Season Three; and good old Connie Hilton, with his worldwide chain of luxury hotels, got mentioned for the first time in years in last week’s episode, too. Plus, American advertisers had a profound effect on the Italian advertising industry in the 70s–and, while Don can’t work in America because of the contract he signed with McCann, he could easily take a job overseas.

There’s also this tidbit, from an interview Weiner gave a few years ago regarding the Sopranos finale.

So now the question becomes an SAT word analogy: the Sopranos‘ first season finale is to the series finale as the Mad Men first season finale is to its final bow. The Sopranos first season ends with the family eating in Artie’s restaurant in the middle of a blackout caused by a terrific thunderstorm, united by table and meal, and mostly happy to be there. And the show itself ends kind of the same way–except on a terrifically ambiguous note. Or, if you like, as a riddle that can never be solved.

Mad Men‘s first season finale ends with Don sitting on the steps in his empty home, having missed his chance to spend Thanksgiving with his family. It’s not the saddest ending in the world, but it’s not a happy one, either. And it’s one he (and we) should have expected, since he spent the entire episode trying pretty hard to run away from his family and himself. Will the show end similarly? Will Don still be alone–and still by choice? Or will he simply be isolated from everything he thinks he holds dear?

How do you think Mad Men will end? Is Don going to die? Will we flash forward forty-five years and finish the mid-20th century show in the present day? Or will something even stranger come out of nowhere and shock us all?