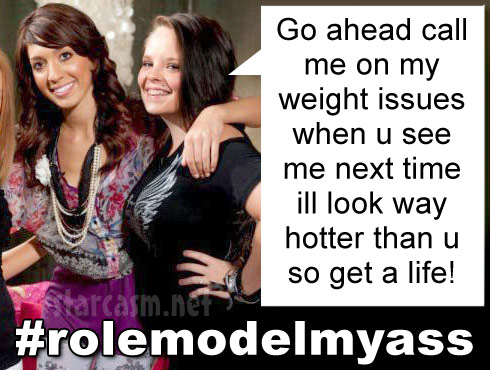 It seems we have a full-scale Teen Mom feud a-brewin’! The whole thing started when Catelynn Lowell tweeted “All I have to say Is she sounds like a dying horse!! U kno who I’m talking about,” on May 6, the same day Farrah Abraham’s infamous sex tape was released. Farrah Abraham responded by speaking to both Hollywood Life and Us Weekly, telling them that Catelynn was either jealous or immature, that “Catelynn has a weight issue,” and that she was never speaking to Catelynn again. “I am trying to be a role model for the other Teen Moms,” the adult film star added.

Catelynn was quick to respond on Twitter, letting loose with a series of tweets calling out her co-star:

Go ahead call me on my weight issues when u see me next time ill look way hotter than u so get a life! #rolemodelmyass (To which Jenelle Evans responded by tweeting “Preach” with a series of little praying hands icons.)

At least I work to look good I don’t waste my money on plastic surgery! All REAL woman here not fake ass plastic! #curvygirlsrock

@CatelynnLowell Jealousy comes in all fashions. Just remember u don’t have 2 hire someone to give u love or diminish ur respect for ur gain

Catelynn called out Farrah for a poll duel, something we are happy to oblige with. So, who do you think is a better role model? Farrah Abraham or Catelynn Lowell?

(You can only vote once an hour. You hear that Farrah?)