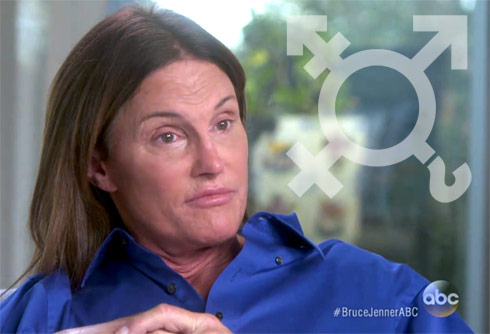 Just under 17 million viewers tuned in to 20/20 Friday night to watch Bruce Jenner publicly reveal to Diane Sawyer that he is a woman, and has always identified as a woman. However, Diane referred to Bruce throughout the interview using the masculine pronouns he, him and his, later explaining that was Bruce’s preference for now.

This apparent conflict caused quite a conundrum for those wishing to talk about Bruce after the interview who wanted to be sure to do it in the “correct” way. We here at Starcasm had quite the debate about it, and we were excited when GLAAD issued an official statement in reaction to the Bruce Jenner interview, assuming it would clarify, if not by specific direction, then by example. Alas, they completely dodged the issue by using Bruce’s name every time:

“Today, millions of people learned that someone they know is transgender,” said GLAAD President & CEO Sarah Kate Ellis. “By sharing this story, Bruce Jenner has shined a light on what it means to be transgender and live authentically in the face of unimaginable public scrutiny. Though Jenner’s journey is one that is deeply personal, it is also one that will impact and inspire countless people around the world.”

“Every transgender person’s journey is unique, and by choosing to share this story, Bruce Jenner adds another layer to America’s understanding of what it means to be transgender,” said Nick Adams, GLAAD’s Director of Programs, Transgender Media. “We hope that after hearing Jenner’s story, people will want to learn more about the issues and challenges facing their transgender friends, co-workers, and family members. Stories like these will help create a world in which everyone can express their gender identity without fear of discrimination and violence.”

Thankfully, GLAAD later followed up their statement with a “Tip Sheet” that included “transgender terminology and tips for covering Bruce Jenner’s ABC interview” in which they clearly state that the accepted manner to talk about Bruce (for now) is to continue to use masculine pronouns. “At this time, Bruce Jenner has not indicated that a new name or pronoun should be used,” the tip sheet reads, “so please respect his wishes and refer to Bruce Jenner by his current name and with male pronouns until such time as he requests something different.”

Here is the full tip sheet that also offers some helpful advice on what and how, as well as what not and how not, to talk about Bruce Jenner:

Please consider the following guidelines when covering Bruce Jenner’s disclosure that he is transgender. This style guide will help you create respectful and accurate stories while avoiding common mistakes and clichés.

DO consider including a sentence in your story that explains that you will be referring to Bruce Jenner with his birth name and male pronouns because he has not indicated that he prefers a new name or pronoun be used. This will alert your audience that you are aware of the issue, and have chosen to follow Jenner’s wishes. If Jenner chooses to adopt a new name and/or pronoun in the future, GLAAD will publish an updated Tip Sheet with best practices based on that information.

DON’T speculate about medical procedures transgender people may or may not choose to undertake as part of their transition. This information is a private matter and is not pertinent to stories about Jenner’s life. Overemphasizing the medical aspects of someone’s transition is reductive and insulting to transgender people.

AVOID the phrase “born a man” when referring to Jenner. If it is necessary to describe for your audience what transgender means, consider: “While Bruce Jenner was assigned male at birth, he identifies as a woman.”