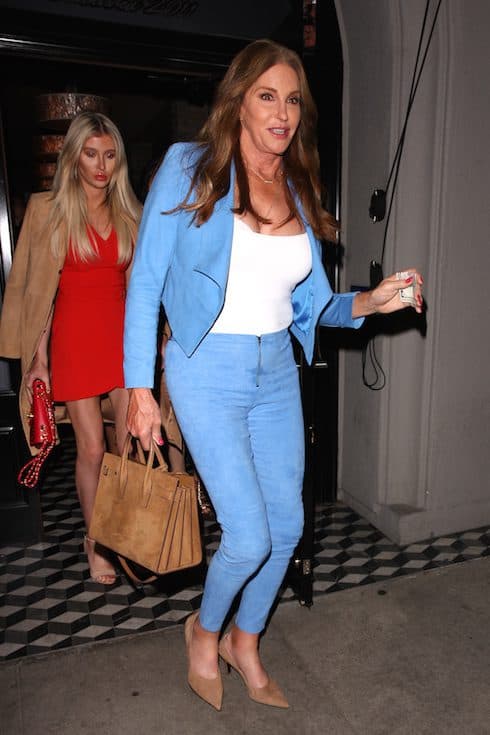 For the past couple of weeks, there’s been a game of tag among a number of tabloids over reports of Caitlyn Jenner getting married to transgender model Sophia Hutchins, who is 47 years Jenner’s junior. However, despite nearly a year of speculation and gossip about the nature of Jenner and Hutchins’ relationship, the two have yet to actually confirm that they’re even an item.

In fact, Caitlyn and Sophia have only recently begun appearing in public together. The photo at the top of the article, taken as the women leave dinner in Malibu on April 1st, represents one of the first times they could be linked by literally being in the same place at the same time. Before this spring, the two had been playing a bizarre sort of social media game in which they would post photos from the same spot — but without the other person in the image. Like, for example, Sophia lounging in what turned out to be Caitlyn’s bed:

And another recent photo, of Caitlyn and Sophia golfing together in Arizona, marked one of the first times either woman had appeared in the other’s social media feeds. Here’s that pic, which Sophia posted to her Instagram feed on April 28th: 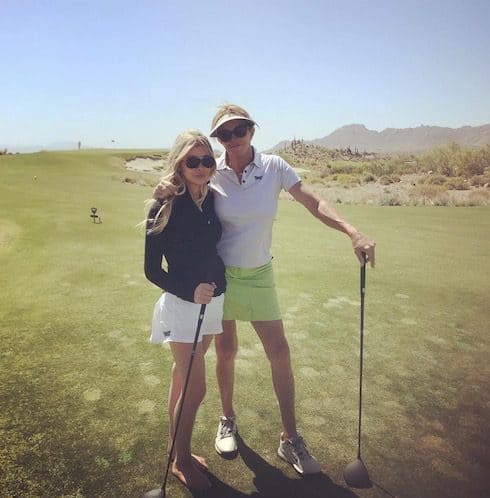 In any event: the latest report of 68-year-old Caitlyn Jenner getting married to 21-year-old Sophia Hutchins suggests that the nuptials were inspired at least in part by Caitlyn’s rejection from the Kardashian family.

Caitlyn is allegedly “in a rush to wed for the fourth time” thanks to the Kardashians giving her “the cold shoulder following Khloe’s scandal” with baby daddy Tristan Thompson.

Said the new report’s insider, “Caitlyn would have loved to have helped Khloé through the tough time in the delivery room, but the Kardashians have kicked her out of the family.” So she and Sophia are said to be “plan[ning] to tie the knot this summer on a bluff near Jenner’s Malibu home,” in a small ceremony with only “close friends and family members” attending.

“[Caitlyn] and Sophia have a lot in common,” the source went on, before adding, “The age difference doesn’t seem to matter at all.”

Before that, the story of Caitlyn Jenner getting married to Sophia Hutchins got started up by Heat magazine, whose source appears to have said “Cait really sees herself spending the rest of her life with Sophia,” who is “the only person [Caitlyn] can count on” after losing the rest of her family.

But PinkNews attempted a quick debunking, reporting that they reached out to Caitlyn Jenner’s rep for comment and got back a two-word reply: “No engagement.”

Of course, that response doesn’t mean the two aren’t getting married — just that the person responsible for interacting with the media on Caitlyn Jenner’s behalf isn’t willing to talk about it. But then it’s also worth noting that neither Caitlyn nor Sophia nor anyone associated with them has ever gone on the record about whether the two women have a romantic relationship. The most detail anyone’s gotten appears to be a related Gossip Cop fact-check, in which Jenner’s spokesperson confirmed only that her client and Sophia are “friends and business associates.”

Why was Jenelle Evans in the hospital? Was it ovarian cysts, heroin, failed alien abduction?