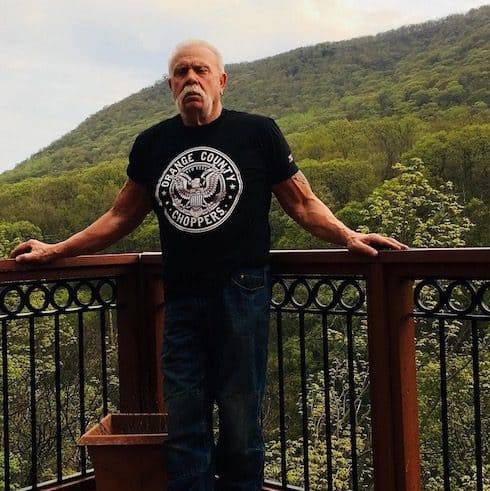 American Chopper founder and star Paul Teutul Sr. was once the king of reality television and the motorcycle world — but Paul is unfortunately still paying for those days’ heady excesses. Is Paul Teutul Sr. still rich? According to his amended bankruptcy filing, the 68-year-old is in fact millions of dollars in debt, and owes far more than he brings in each month.

As we reported earlier this year, Paul Sr. appeared to be having serious problems with his finances, though the extent of his trouble could only be speculated upon. The most common celebrity net worth sites all listed Paul’s net worth as somewhere in the neighborhood of $15 million. But it seemed clear, thanks to numerous fraud lawsuits against Paul, a pending foreclosure on his upstate New York home, and Orange County Choppers’ auctioning off its headquarters in order to avoid foreclosure, that the eight-figure fortune was out of date.

Now we know considerably more about the real number. Page Six reports that Paul Sr. “filed a statement of financial affairs as part of his amended bankruptcy petition.” (Paul filed for Chapter 13 bankruptcy this past February.) According to that statement, Paul is indeed “millions of dollars in debt.”

It should be noted up front that neither Page Six’s article nor a cursory search of available public records summed up the exact amount of Paul’s debt. But the numbers stacked against the Teutul family patriarch appear to be considerable. For one thing, though he lists a monthly income of $16,530.81, Paul’s monthly expenses — including, presumably, debt servicing and legal fees — come to $20,129.17.

Paul’s 38 acre estate in Orange County NY — that’s the main house’s back deck in the photo at the top of the article — is in foreclosure. The property is currently on the market for $1,999,000 (check out a full photo gallery here) but that amount, hefty though it may be, is a far cry from the $2,895,000 asking price when Paul put it on the market in October of 2017.

Furthermore, Paul included among his assets a “rescue farm” with a veritable arc of animals, among them “one alpaca, two goats, two pot belly pigs…one Arabian horse, four mini horses, two draft horses,” and an assortment of donkeys and cats. Paul’s February bankruptcy filing noted that he was trying to get an agricultural tax break on his property by having it formally listed as such a farm; it’s yet unknown whether he succeeded, or whether his tax documents and financial statements are considered separate.

Hanging out with my girl on the deck

But he has only about $24,000 in liquid assets and a little over $150,000 in assorted retirement plans. Those figures have to content with business and personal credit card bills of almost $67,000, plus “thousands of dollars in various judgements from litigation.”

Among those last are “a $32,000 judgment against him by Hudson Valley Merchandising,” who allege that Paul still owes them money stemming from a 2015 fraud charge; and “a $51,841.01 claim against” Paul from JTM Motorsports, Inc, who claim that Paul is hiding assets and still owes them the money in question for work done on a 2009 Chevrolet Corvette ZR1.

Perhaps most troubling of all, Paul Sr. also acknowledged that “he is currently involved in eight lawsuits.” Among these is an ongoing fraud charge leveled by Thomas Derbyshire, who’s suing Paul for the $1.8 million he says he paid Paul to begin production on a new show called Orange County Choppers: American Made.

According to Derbyshire, Paul Sr. agreed on a 51/49 split of the show’s profits in Derbyshire’s favor, but that Paul then “tried to change ownership,” was paying his son Michael without Derbyshire’s consent, and wasted time on “endless reshoots of himself.”

Fortunately for Paul Sr. and the American Chopper brand, significant financial relief could be just around the corner. The brand-new season of the rebooted American Chopper, which had its sneak premiere earlier this spring, is set to debut on Discovery this Memorial Day, Monday, May 28th. Hopefully, the show can tap into its earliest success and help Paul climb out of his financial hole.