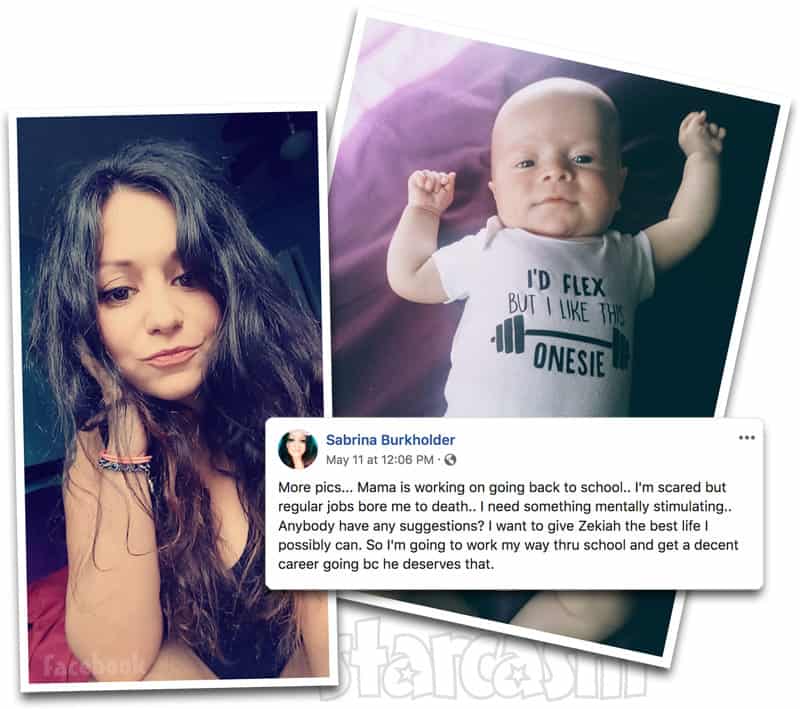 The last time we updated our readers on Breaking Amish and Return To Amish star Sabrina Burkholder was back in early March, just after she had given birth to her son Zekiah. It’s been more than two months, so we though we would check in on how she and Zekiah are doing. The answer appears to be “all good!”

On May 9, Sabrina shared the following update on Facebook, along with two photos of her growing son:

Zekiah turned two months old on Monday ? Today he got his shots and Mama is so proud of him!!!! I cried more than he did? He is such a good baby!!! He likes watching Mickey Mouse but we stopped watching Elmo because he doesn’t like Cookie Monster’s voice lol. The pediatrician said he looks good and that he is above average!!

His Royal Highness is 4 weeks old today! And on the 6th he will be officially one month old?? Zekiah’s favorite things include eating and music. Mama has videos on her old phone of Daddy singing and Zekiah coos whenever I play them for him❤ He is a cuddle bear Mama isn’t allowed to put him down for more than 5 minutes or he gets very vocal and lets Mama know he does NOT approve ??? I can’t believe it’s been a month already I’m pretty sure that that was the shortest month of my life so far!!! ❤❤❤❤❤

#ReturnToAmish Sabrina was pregnant with a 4th child last year & nobody knew! Get updates on her 2 children with Jethro, as well as a relationship status update. Plus, Sabrina shares info on her 1st two children whom she no longer has custody of. #spoilers https://t.co/ypPxMhW9Fb

IS SABRINA GOING BACK TO SCHOOL?

The reality star mom has a long history of battling drug addiction, but Sabrina remains sober and focused on keeping her life on track. Part of that focus is considering the possibility of going to college to better her career opportunities.

“Mama is working on going back to school,” Sabrina captioned a gallery of Zekia photos posted on Saturday. “I’m scared but regular jobs bore me to death,” she added. “I need something mentally stimulating. Anybody have any suggestions? I want to give Zekiah the best life I possibly can. So I’m going to work my way thru school and get a decent career going bc he deserves that.”

Sabrina mentioned in the comments that she had considered nursing, but she was worried that her struggles with math would prevent her from being able to get her certification. Numerous commenters assured her that nursing does not require a lot of math to get certified, and Sabrina genuinely seemed interested in looking into it further.

Fans have been treated to numerous photos of Zekiah, but none of Zekiah’s dad, Jethro. Many of Sabrina’s followers jumped to their own conclusions, and some shared negative comments about Jethro, who has had his own addiction issues in the past. Sabrina was quick to clear things up:

For everyone that keeps inboxing me and wondering where Jethro is and accusing him of being an absentee father, he is in a discipleship program. I try not to say alot about him because his story is his story to tell, not mine. With that being said, I fully support him trying to better his life. I am proud of him he has come a long way. I genuinely care about him and want him to succeed. He may have done things that were wrong, but so did I. I am not better than him in any way, shape, or form. I was angry with him for about a year but I finally managed to let it go; however, I’m not proud of the things I did and said out of anger. He didn’t deserve that. Being pregnant and then having the baby alone was very hard for me. I was supposed to be induced but then my water broke (thank God!!) and all I could do was cry and say how much I wished he was here. But he’s doing what is best for him and I support him in that no matter what. I hope someday Zekiah gets to meet his daddy. Even if we are or aren’t together, I will never keep his son from him. I want Zekiah to have that. Zekiah is what is most important. We say our prayers for Daddy every single night❤ So if you think about it, pray for him. What he is doing isn’t easy. Thanks.

Sabrina explained in the comments why she felt like she needed to make a post about Jethro:

SABRINA: alot of people have asked me where he is bc they assume he is a deadbeat father. Which in part was my fault thanks to my hormonal angry fb rants. If people know hes actively working on himself they wont be so quick to judge. I am going to believe the best about him until he proves to me otherwise.

COMMENT: I’m confused on why people think they need to know your business and pm you. That’s creepy and kinda stalkerish

SABRINA: yeah idk but figured since they like to talk crap I would make a few things crystal clear. Jethro isnt a bad person hes my sons father and I am not gonna let it fly.

Sabrina was also asked what a “discipleship program” is and she explained that it is a program for “training people to be disciples of Jesus.”

The day after clarifying the situation with Zekiah’s father, Sabrina returned to Facebook to clarify A LOT of other things: 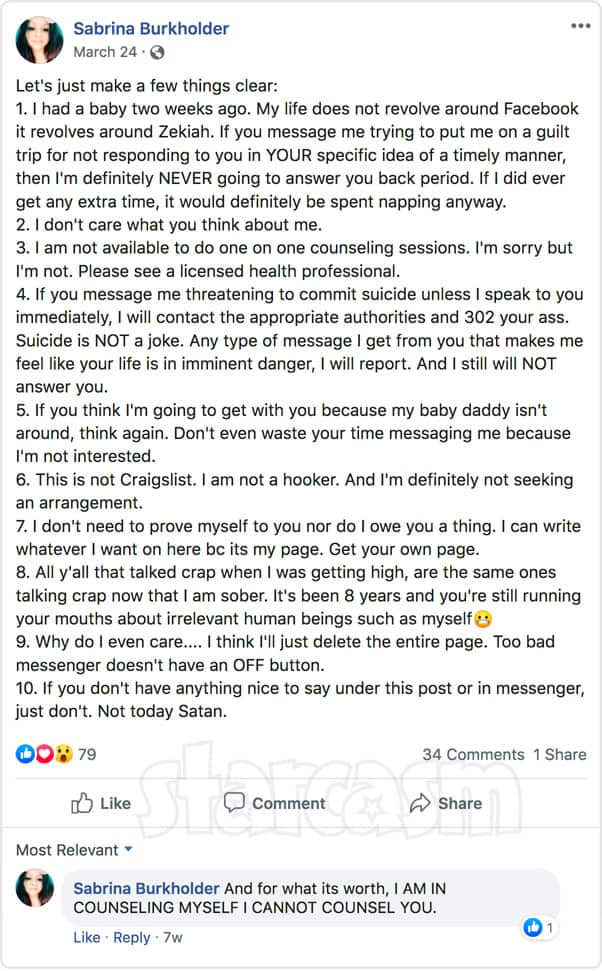 Sabrina has certainly never had difficulty making her opinions known!

SABRINA WEIGHS IN ON JENELLE AND DAVID EASON

Speaking of Sabrina making her opinions known, she did exactly that with the biggest story in reality television over the past weeks: Former Teen Mom 2 dad David Eason beating then shooting his wife Jenelle Eason’s French bulldog Nugget after the dog allegedly snapped at their daughter Ensley. (If you’ve been out of the loop on that story, then the only thing I can suggest is just to click on our Jenelle category and start catching up!)

Her reaction may surprise some folks as she seems to think people are being too quick to judge Jenelle and David:

I find it ironic that people like to run their mouths about people they don’t know in real life. Case in point, Jenelle Evans. All y’all that be talkin crap over her husband shooting their dog look ignorant af. It was a DOG. I am not condoning the shooting of a family pet; however, I find it ridiculous that babies are ABORTED AND MURDERED IN COLD BLOOD EVERY SINGLE DAY AND NOBODY BATS AN EYEBALL, yet some of the same people wanna have a French conniption over a dog being shot. You know, in 2016 an ex of mine choked one of my cats to death. There was nothing I could do about it. People on tv are people too. We are human beings and sometimes bad things happen that are beyond our control. You never think something like that will happen until it does. Just because someone in our circle does something insane doesn’t make us bad people too. We are people too and we don’t always make the wisest decisions… And neither do YOU. Nobody is perfect except for God.

That is definitely a different take on the Jenelle and David situation than I am used to seeing! (By the way, this isn’t the first time Sabrina has come to Jenelle’s defense. Back in 2014 she took Jenelle’s side in her feud with Farrah Abraham. Sabrina’s comments drew the admiration of Catelynn and Tyler Baltierra, who are apparently big Breaking Amish and Return To Amish fans!)

Anyways, I want to sincerely applaud Sabrina on maintaining her sobriety and hopefully getting her life on track once and for all. I’ve said it so many times before, but I’ve been a fan of hers since the very first season of Breaking Amish, and it has been heartbreaking to watch her struggle so much over the years. We will certainly continue to follow her story, and we will hopefully have another positive update (and more Zekiah photos!) in a few months. 🙂