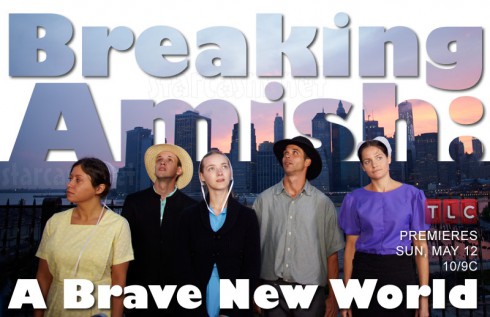 Breaking Amish is returning to TLC for season 2 — but the original cast will not be coming back. Instead, the show will start fresh with a new group of men and women trying to find themselves in the real world. The five original members, Katie Stoltzfus, Jeremiah Raber, Sabrina High, Abe Schmucker, and Rebecca Byler, will be returning to the network as well, but this time it will be in their own spinoff show.

The Hollywood Reporter has announced that Breaking Amish: A Brave New World will reunite the original five as they attempt to start fresh in a large ex-Amish community in Sarasota, Florida. The cast was in New York City during Season 1, but upon arrival in the Sunshine State, they experience even “more culture shock, unexpected enemies and surprises from family members with their own agendas.” There will be plenty of drama between the roommates including financial struggles, love triangles, and career turmoil. There is no word yet if the series will include Rebecca’s daughter, the existence of which Rebecca kept hidden through most of Season 1.

UPDATE – TLC has released a premiere date and a preview trailer for the show, which has been shortened to just Breaking Amish: Brave New World! (Click the link to check it out.)

UPDATE – Click here to see the first official photos from the new season, including a number of pictures featuring what appears to be Jeremiah and his new girlfriend!

“The Breaking Amish franchise is a remarkable look at individuals facing a critical crossroads in their lives: whether to pursue the dreams they’ve always had or stay in the only life they’ve ever known,” TLC GM Amy Winter said. “Both iterations of the series follow a group of young men and women on their own journeys of self-discovery, complex relationships and understanding the world around them.”

Although there was a lot of controversy surrounding the authenticity of the series, the show did huge in the numbers game, capturing an average of 3.2 million viewers per episode during season 1.

Breaking Amish season 2 will feature three new women and four new men. Production is set to begin in the spring for a late-summer premiere. Breaking Amish: A Brave New World premieres on Sunday, May 12 at 10/9c on TLC.