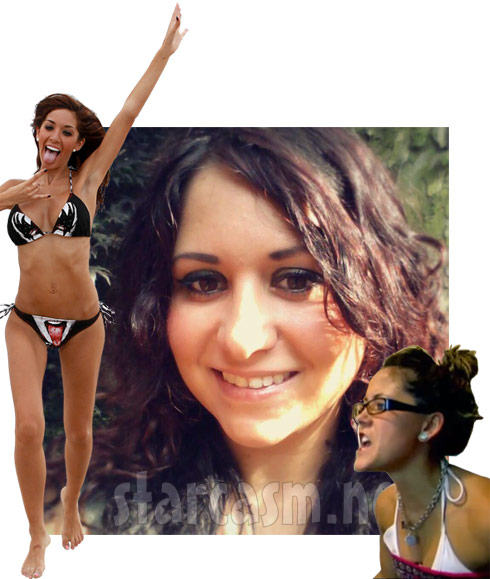 It’s a Starcasm Twitter feud crossover event of epic proportions as Breaking Amish star Sabrina High has weighed in on the recent feud between Teen Mom‘s Farrah Abraham and Teen Mom 2‘s Jenelle Evans! In case you missed it, Farrah Abraham was asked in a recent interview about Jenelle Evans’ second pregnancy and she said “I would never go find a boyfriend right now, get pregnant, have a second child, without a plan.”

Jenelle took to Twitter to offer up her reply:

Sabrina must have just heard about the most recent Farrah vs. Jenelle spat because she took to Twitter tonight to share her thoughts on the subject, while at the same time revealing that even a young woman raised in a strict Mennonite family knows the difference between a barn’s front and back door:

Um Farrah Abraham says she wouldnt have a kid again without a plan?? Yeah obviously.. you need to take it in the right hole first sweetie

The tweet sparked a convo with a fan in which Sabrina further explained her take on Farrah’s comments:

@sylviashutup no I just dont get why she'd say that..she would never have been on tv if it wasn't for her unplanned pregnancy.

@sylviashutup and therefore she wouldn't be where she is today.

@sabrina_lelia yeah, I understand. I know she's not exactly the nicest person. I was just wondering. Thx for replying. I'm a fan.

So now we know that Sabrina High is a fan of Teen Mom and Teen Mom 2, but the feud also outed two original Teen Mom stars as fans of Sabrina and Breaking Amish! Check out Tyler Baltierra’s response to Sabrina’s Farrah tweet and the resulting conversation that included Catelynn Lowell as all three heaped on the mutual admiration:

@sabrina_lelia @CatelynnLowell NO! YOUR awesome lol we both have watched your story from the beginning

@sabrina_lelia omg hahahaha this is GREAT! 😀

Although I had no idea that Catelynn and Tyler are huge fans of Breaking Amish (and Return to Amish) I was well aware of their mutual disdain for former cast mate Farrah. The couple were involved in an online feud with Farrah themselves just a couple of weeks ago after Farrah commented on Catelynn’s recent pregnancy in an interview with us by saying “it does make me very sad to still see them make poor choices.”

Catelynn responded by tweeting, “Huh bad choices?!? Hahaha I didn’t make a so called ‘sex tape’ but WE make the bad choices?”

Farrah responded on Twitter with, “Glad I moved on #DoorSlammed wish those #StillTeens all the best when your not a Teen #QuitPlayin.”

Tyler then took the slam game to a new level with his response: “If only that tweet made sense If your going to attempt 2 be a smarta*s at least make it sound good #BackDoorSlammed.”

Farrah then declared she was so over the whole thing before fanning the flames further by stating, “I guess this is just a cry for them needing attention and wishing that they had a life or something.”

So far Farrah has not responded to Sabrina’s comments, but that could be because she wasn’t actually tagged in the tweets. I’m guessing we will have Farrah’s insights on Sabrina’s recent pregnancy by the end of the week.

Is there any way TLC and MTV could work together on a Breaking Teen Momish crossover show? Count Starcasm in as an official corporate sponsor for those fireworks! 🙂