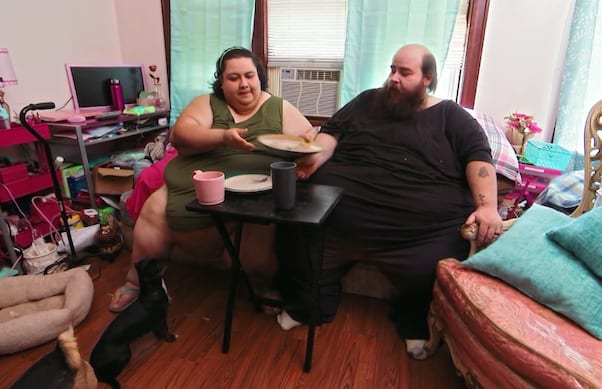 The My 600 Lb Life Vianey and Allen episode is an interesting contrast to the last few episodes of Season 7. Several of those cast members (the instantly infamous Angie J is the first to come to mind) have flamed out pretty spectacularly, but Vianey and Allen, whose journey makes up the Season 7 finale, are trying for moderation — before the death they so fear comes calling for them.

As was the case with Angie last week and Mercedes Cephas before her, TLC offered almost nothing in the way of promotional materials ahead of Vianey and Allen’s episode. The always reliable Monsters and Critics got an emphatic “No clip” instead of a preview. The network put nothing up on its social media sites to build anticipation — except for one brief video literally as we were putting this article together (and which we’ll get to in a moment).

Even the synopsis for the My 600 Lb Life Vianey and Allen episode was incomplete. Here it is in its entirety, from the show’s official site:

Weighing over 600 lbs each, Vianey and Allen are locked in a codependent relationship based on a shared love of food. As they head to Houston, they will soon find out if their relationship can…

That’s the first deliberate ellipsis we’ve seen in years of covering My 600 Lb Life debut episodes. But we were able to find out that the couple is from Chicago. And it’s also worth noting that Vianey and Allen is both the second episode to feature two people this season and continues the show’s new tradition of ending a season with an episode featuring two different people. They did the same thing last year with Jennifer and Marissa. The year before that, they did it with a couple of guys from Rhode Island who we never heard from again.

Now: about that promo clip. Unfortunately, it’s only available via Facebook, so we can’t embed it. (You can view the clip here.) In the video, we follow Allen during the standard trip to the grocery store, during which he worries in a voice-over that the day-to-day reality of Dr. Nowzaradan’s diet will be too much for he and Vianey to withstand.

“Getting his diet was a bitter shock,” Allen says, “because it seems like we have to give up everything good. And that’s just not what we were expecting.” He goes on to explain that he’s worried about Vianey slipping into a depression: “I’ve seen that before, when she’s tried to diet. And I don’t want that to happen again.”

In order to try and head off such a thing, Allen makes the executive decision to withdraw he and Vianey from snack food slowly. And honestly, the way he explains it, it sounds less like a food addicted person convincing himself that a bad decision is a good one and more like a fairly sensible thing to do.

“I’m getting us a lot of high protein options,” Allen says. “I’m also getting us some snacks, to make sure [depression] doesn’t happen. That will help us slowly get rid of everything we shouldn’t have.

“My plan, every few days,” he goes on, “we lose a couple more snacks — until we’re only doing what’s on the diet….We both know we don’t have a lot of time before our bodies start giving out.”

Allen concludes on a dark note: “Our options are down to doing this, or die.”

You can stream Vianey and Allen’s debut My 600 Lb Life episode on the show’s official site, via TLC.

(Photo credit: My 600 Lb Life Vianey and Allen via TLC)

Are beards really dirtier than toilets?