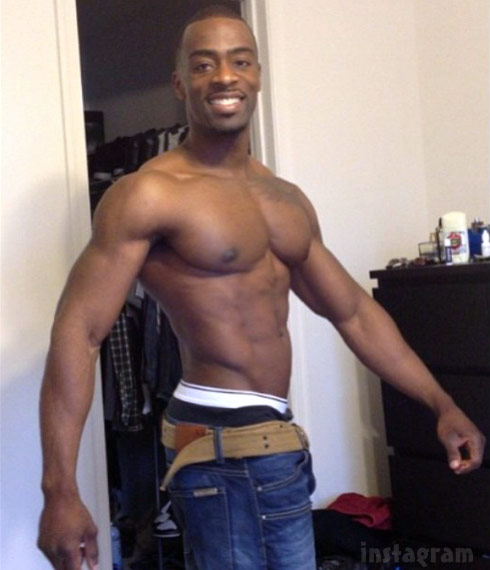 The preview trailers for the premiere season of TLC’s Breaking Amish: LA teased that cast member Lizzie Stoltzfus had a secret, and it was revealed a few episodes in that her secret was that she was pregnant. But, as it turns out, her secrets didn’t stop there! When Lizzie later gave birth to her son it was revealed that the baby’s father, Hoj James, was not only not Amish but he was African American as well — something even Lizzie’s brother Sam didn’t know. 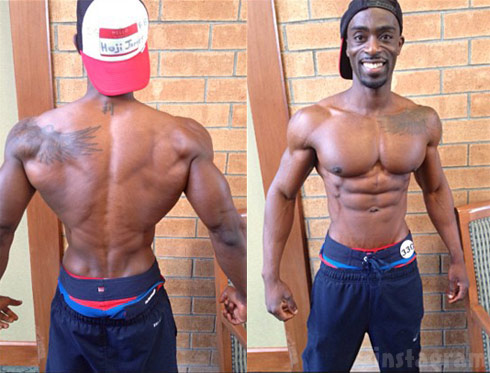 So who is Lizzie’s boyfriend Hoj? His real name appears to be Hoji James, and as he stated on the show, he is a barber and a body builder from Maryland. As you can tell from the photos in this post, “Hoj” takes his bodybuilding very seriously, and as a result has a seriously chiseled physique that helped him take home first place in the Shawn Ray Classic physique competition more than once, and earned him third place in the IFBB North American Championships this year.

So how in the world did this Maryland barber and bodybuilder hook up with Lizzie Stoltzfus? In the clip below Hoj reveals that he met Lizzie in an Amish market around his neighborhood and the two began dating on the downlow:

I wasn’t able to find any photos of Lizzie and Hoj together from before the show was taped, but I did find photos of Lizzi and Hoj individually Uploaded by each separately) that appear to have been taken while they were out together: 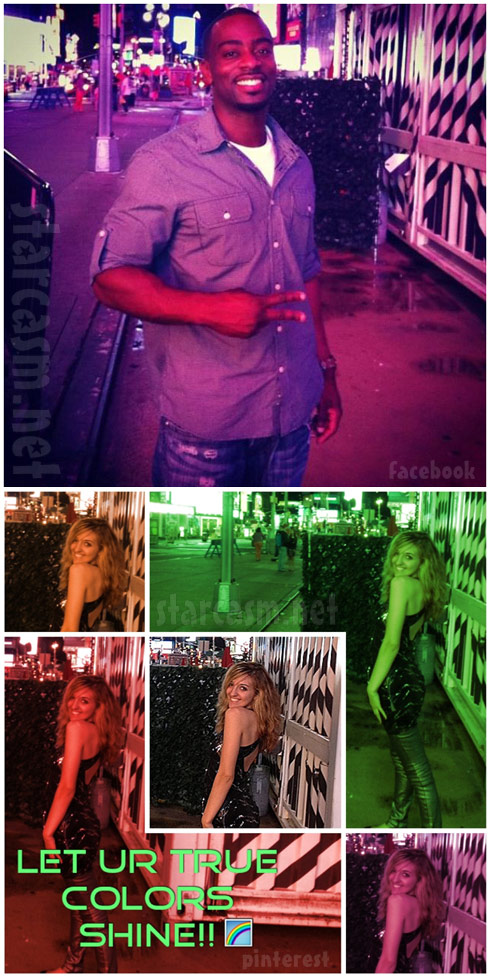 The pictures (which were not only taken at the same location, but also feature the same event in the background and the same water puddles on the sidewalk) were uploaded in September and November of 2012, which is timed just about right that this night out could have been the magic night out, if you know what I mean! (And judging from how Lizzie is dressed, I’m guessing Hoj didn’t pick her up from work at the Amish market!)

While researching Hoj I found out he has his own website called American Diesel Games on which he offers various workout and nutrition packages to help you achieve a similar physique. Here’s how Hoj describes his story on the site:

…118 pounds, skinny, and frail… I was looking in the mirror, in slight disgust at what I saw. I wanted to change my self image but had no idea where to start. Sit ups and push ups were the first thing that came to mind. I mastered them quickly yet still wasn’t completely satisfied with the image in the mirror. I wasn’t pleased with the bulky look I’d acquired with it. My stomach was bloated even though I did hundreds of sit-ups. After years of searching for answers I found that a balanced diet with incorporated the RIGHT work-out plan was the key to the physique I was looking for all along. I am now a champion fitness competitor. I compete with some of the top physiques in the U.S. I look in the mirror and am truly proud of what I see. Life isn’t about getting somewhere and leaving people behind. It’s about learning and teaching. It’s about inspiring. It’s about helping people reach their full potential. I know the journey…the struggles. I know that if I could get there so can you.

In addition to liking what he sees in the mirror, Hoj also seems to like what he sees on his television — at least as far as his appearance on Breaking Amish: LA that included the birth of his and Lizzie’s son Kaden. He posted this next photo on instagram yesterday and captioned it “A beautiful moment captured on Film! Then captured on camera! Don’t forget to catch the 2 hour season finale of TLCs Breaking Amish! Sunday @ 9pm-11pm Eastern and 6pm-8pm Pacific.” 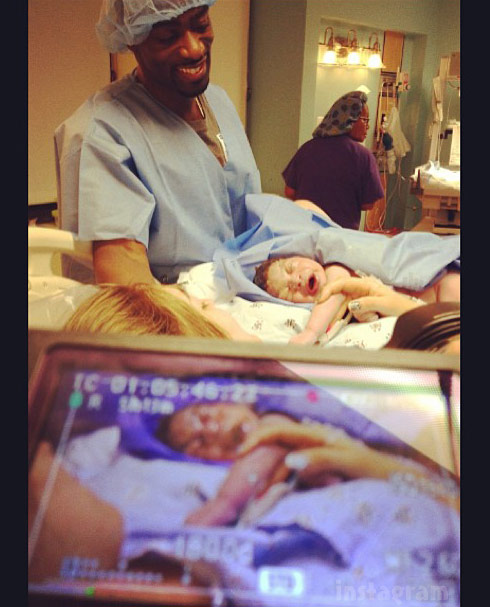 He previously posted a couple other photos promoting his appearance on the show, with one caption reading, “WATCH ME NOW on TLC Men’s Physique on Breaking Amish L.A.??? Follow another side of my craaaaazy life on TLC’s hit reality show! 7pm and 11pm West Coast – 10pm and 12am East Coast.

One thing that we haven’t seen on the show (so far) is that Hoj apparently has another son, which means Kaden has a big brother! Here’s a photo of father and son looking, well, like father and son: 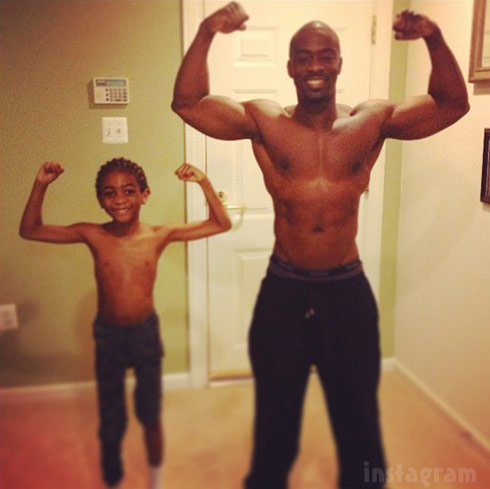 Hoj reveals that his older son “wants 2 lift weights w/ his papa! Not yet boy but we can flex together on IG for now.” He then responds to comments on the photo saying he will let his son start working out with him “when he’s about 15.”

Speaking of age, I was unable to verify how old Hoj is, but there is a Hoji James listed s graduating from Buck Lodge Middle School in Adelphi, Maryland in 1992, which would mean he probably graduated high school in 1995 or 1996. That puts his age somewhere in the 34-36 years old range.

It’s still unsure what Hoj and Lizzie’s current relationship status is, although we may find out during tonight’s finale. However, Lizzie did open up about her family’s reaction to Kaden and Hoj in an interview with Radar Online.

“I think that fact that he is black was not nearly as hard for them as the fact that he wasn’t Amish,” Lizzie tells the site. She doesn’t reveal whether or not she decided to return to the Amish community (I doubt that was the case!) but she does say that Hoj and her mom and dad are all happy with her decision. “My parents are very happy how it turned out because they know that I’m happy with what I’ve chosen and that makes them happy. Hoj is always going to be a part of Kaden’s life, no matter what happens. I will never keep him from his child and he will definitely be with his son.” 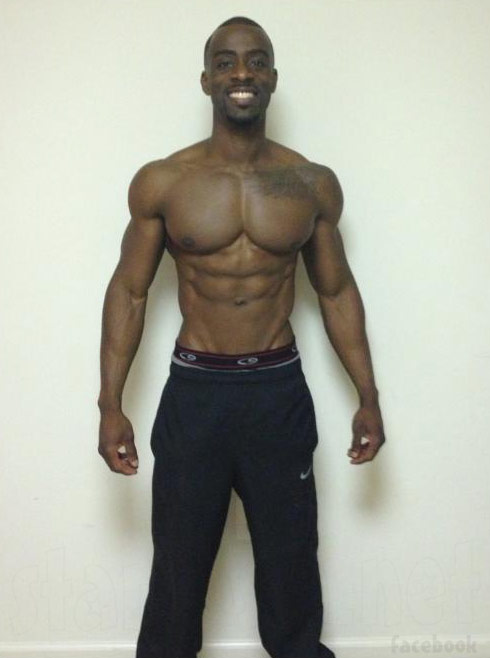 As far as what Hoj is up to, he will b returning to the stage to compete in the NPC National Bodybuilding Championships for Physique in Fort Lauderdale, Florida on Novmber 22 and 23.

PHOTO Jon Gosselin is a stripper in Atlantic City now