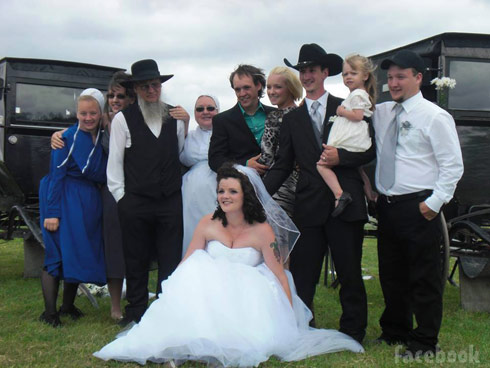 On June 1 the original cast members of TLC’s Breaking Amish are returning to our magic electronic lookity boxes for Return To Amish, and, as evidenced by the dramatic trailer for the new season, a huge part of the show will be focused on the pregnancies of Rebecca Schmucker and Sabrina High. But, fans will also be getting a wedding as Abe Schmucker’s brother Andrew Schmucker, who has appeared along with their mother Mary Schmucker on both the original Breaking Amish series as well as the follow-up Breaking Amish: L.A., married fiancee Chapel Peace in a beautiful and rustic ceremony held May 10 in Rossiter, PA with TLC cameras rolling (I assume).

Some pictures from the ceremony recently surfaced on a couple of Breaking Amish Facebook fan pages, including photos of the bride and groom as well as Abe, Rebecca, Mary, Kate and more! 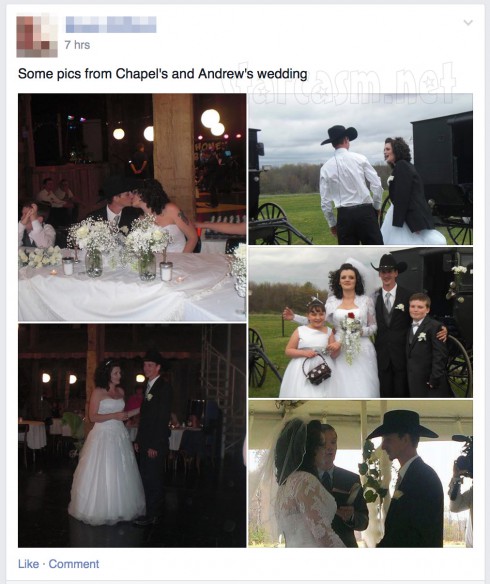 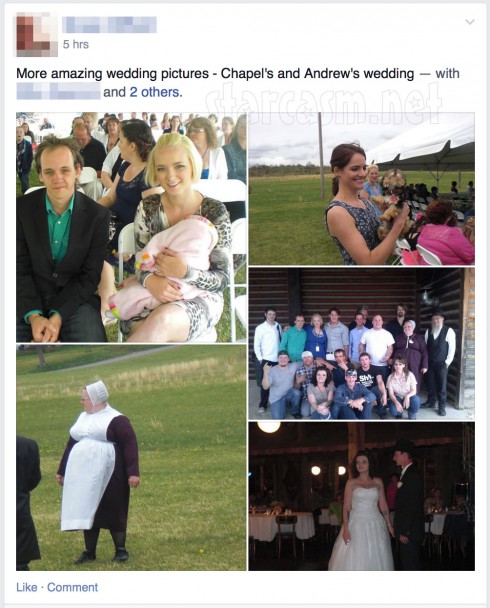 As viewers of the Breaking Amish shows know, Andrew has had a number of run-ins with the law and has spent a good deal of time behind bars. Hopefully the nuptials are just the beginning of him getting his life on track.

But, Andrew potentially getting his life straight is nothing compared to the inspirational story of Chapel Peace, now Chapel Schmucker. Chapel was diagnosed with bone cancer in late 2011. Through treatment she was able to beat back the cancer and lived a year and a half in remission before being diagnosed with the disease again, this time in her lungs.

Click here to find out more about Chapel’s cancer history, including an update on how she is doing now!

The upcoming season has the makings of an incredibly emotional roller coaster ride for viewers, and the ride begins when Breaking Amish: Return To Amish premieres Sunday, June 1 at 9/8c.