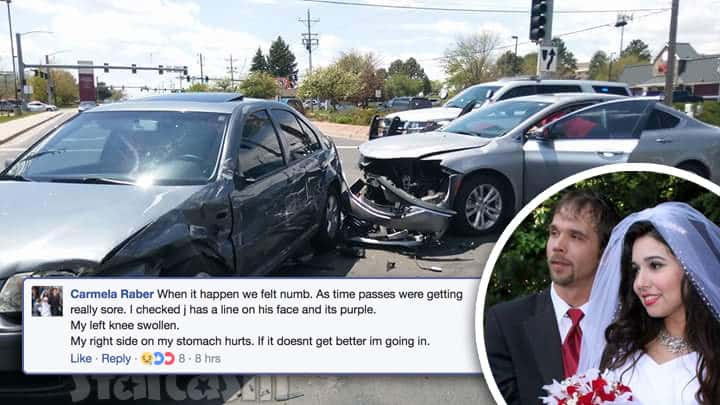 Return To Amish stars Jeremiah Raber and Carmela Raber were involved in a very serious car accident Monday in Colorado, but thankfully both were able to walk away from the scene.

The accident occurred in Colorado while Carmela was driving a Chryser 200 with Jeremiah riding in the passenger seat. “The guy who hit me ran a red light,” Carmela revealed on Facebook. “He came flying out of nowhere and luckily we had many witnesses. They said he was texting or messing with his phone.” 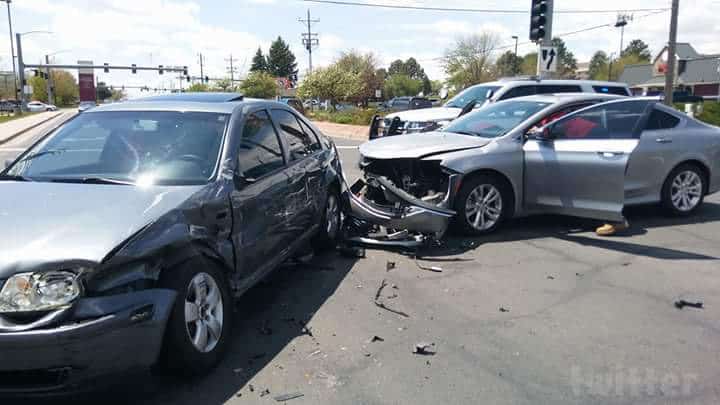 In the photo above you can see the car that allegedly ran the red light on the left and Carmela’s car is on the right with severe front end damage. Here is another photo from the scene: 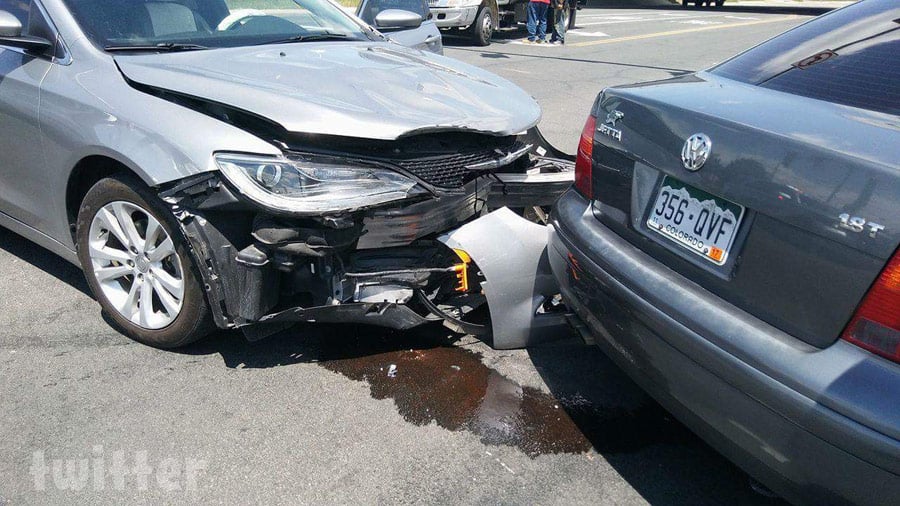 As I mentioned, both Carmela and Jeremiah were both able to walk away after the accident — which is even more amazing given that their airbags did not deploy. “@Chrysler you need to look into your cars airbags,” Jeremiah tweeted after the accident. “Our airbags never deployed. Sounds like faulty airbags.”

Carmela was asked about her children and she responded with some relieving news. “So happy to say kids were not with me… Im so very happy about that.”

Although the two were able to walk away, they both sustained injuries. “When it happened we felt numb,” Carmela said of the accident. “As time passes were getting really sore. I checked [Jeremiah] has a line on his face and it’s purple. My left knee is swollen. My right side on my stomach hurts. If it doesn’t get better I’m going in.”

After numerous concerned commenters insisted that Carmela go to the hospital, she wrote “Yes going soon.” We have not gotten an update after her hospital visit.

So great to hear that Jeremiah and Carmela appear to be OK!

Now that we know that, I will move on to some inevitable questions I’m sure a lot of you have who have been following Jeremiah and Carmela’s story over the past month or so. In case you missed it, Jeremiah was arrested and charged with domestic violence late last month after an altercation with Carmela in which he allegedly threw hot coffee in her lap. According to the police report, the police officer on the scene was shown “several large bruises on [Carmela’s] legs and arms that were caused from the defendant striking her with a closed fist.” In addition, Carmela told the officer that Jeremiah “strikes her on a daily basis.”

After his arrest and release from jail, the couple separated and Jeremiah issued a public apology before his Facebook page announced he had “decided to step aside and focus on him.” Part of that focus was to attend counseling, which Jeremiah has been doing.

It is our understanding that if Jeremiah continues with his counseling, Carmela is open to a reconciliation and to doing her part to have the domestic violence charge dropped. That would explain why they were together. However, it doesn’t explain what they were doing in Colorado. Carmela was recently in Pennsylvania, so I assume they are making the cross-country drive back to her home state of Washington. Beyond that, I don’t have a clue.

Back to Jeremiah stepping aside…When I read the announcement, I assumed that meant Jeremiah was stepping away from all social media — but as you can tell from this post, he has remained active on Twitter, and has even posted video content on Periscope. Just prior to his accident, Jeremiah was once again engaging with his detractors. “Say what you want,” he tweeted on Sunday. “Only forgiveness I needed was Carmela’s. Your opinions don’t matter to me. #jayber #returntoamish”

Later, he added: “So many negative judgmental people on Twitter acting like they’re God. No wonder I have no respect for that religion. #jayber #returntoamish”

And it appears that Jeremiah’s Facebook hiatus has also come to an end as he could not resist addressing negativity on Carmela’s first post about the accident, which was rather vague and unclear about what had happened, leading some to assume she was talking about Jeremiah. Here is her post followed by some interactions with Jeremiah in the comments section:

CARMELA: God is an amazing god he saved us from what could have been bad not feeling too good but still here.
Thank you god.
Cant talk about whats going on but please keep us in your prayers.

COMMENTER: Good choices don’t always feel good . You can do so much better . Jeremiah isn’t going to change . He thinks everyone owes his something. He’s the problem not you.

JEREMIAH: All you can think about is bashing me instead of what the post is really about? Sad

COMMENTER: No I’m just pointing out facts. The show has been on for a weeks now and on every episode poor Carmela is always crying and saying how disrespectful Jeremiah is. Actually the whole cast says what an ass Jeremiah is. Didn’t Jeremiah beat you up a couple of weeks ago? And you still took him back? Not good. It’s only going to get worse. He won’t change. He blames everyone for his problems. I hope you do the right thing and run. You can do so much better.

JEREMIAH: Actually I am changing. I am willingly going to counseling and doing what i can to better myself. How about you want to take your negative crap elsewhere. Being negative about it is just showing Carmela that you’re not one to be listened to. Which would you rather listen too? A negative person or a positive person? Point proven on my end. I know how she feels about your comments. She’s sitting right next to me and see’s all this.

COMMENTER: Yeah she’s probably scared to say anything bc you get “mad”. Like in last nights episode with the councelor. You aren’t positive. All you do is b!tch and complain about everything. It’s time for you to grow up and be a man. Sheesh.

JEREMIAH: Maybe you should get smart and realize that was filmed back in February and I’ve taken the nessacary steps to better myself. Just because your man didn’t change doesn’t mean others won’t

In other Jeremiah news, the “Amish Rebel” will soon be selling a new hat (I assume on his website) with the initials J and C in calligraphy along with a red triangle and the Eye of Ra: 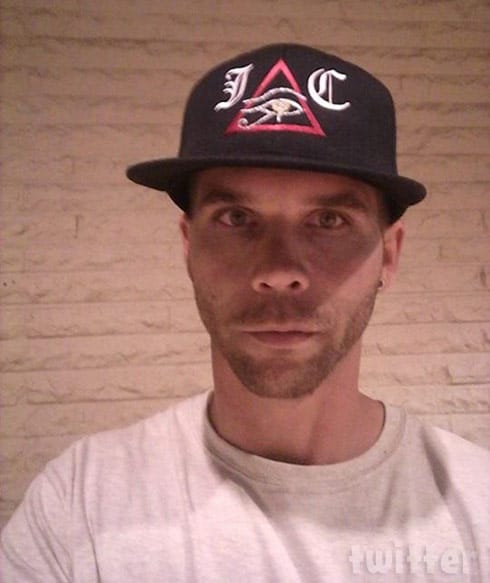 Another photo recently shared by Jeremiah is rather unfortunate given that he was arrested for throwing hot coffee on Carmela: 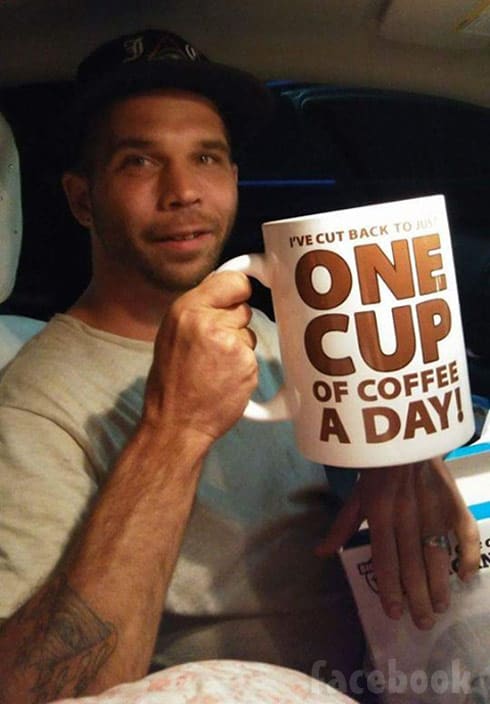 Perhaps his counselor is working with him on sensitivity awareness?

UPDATE – Carmela has since revealed that she and Jeremiah were headed back to Florida together where they will live separately and continue to work on their marriage in hopes of a full reconciliation. Click here for her full announcement.