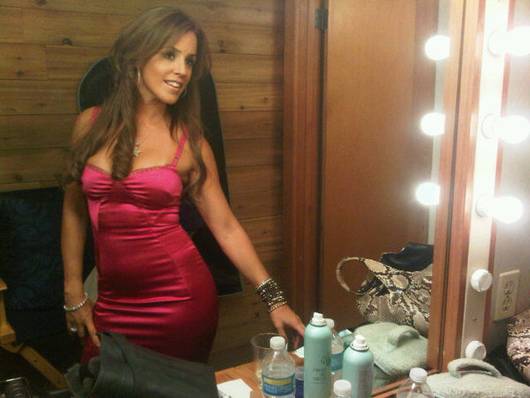 Miami Housewife Cristy Rice has had some time to soak in the drama following a dramatic Lea Black telebomb in which Black accused Rice of working a room like a $1,000 dollar hooker during a live episode of Watch What Happens Live.  Unlike Lea she didn’t come out immediately firing bullets but she has now replied with her version via her personal Bravo blog page.

But as if “hookergate” wasn’t enough she has also chimed in on Alexia Echevarria’s disparaging comments about the “lower people” of Hialeah, FL.  If you missed this situation in which a whole town is ready for Housewife blood you can catch up on that here.

Let’s start with Cristy’s substantial comments in regards to Lea Black’s verbal assault and her recollections of what went down on that now fateful night:

And last but definitely not least is the self-created drama of Lea Black and her gala. It’s actually funny to me that she complains so much about not having time for anything, yet has all the time in the world to gossip and create drama and rumors about my attendance at her gala.

I hear it, but all but none of it affects me because she knows as well as we all do that

I was not going to be in town and had told her I would not be able to attend. The night before the gala, I saw Marysol at the salon and told her my son got sick so I was probably not going to take my kids out of town. Marysol, who was organizing the event told me to definitely try to pass by, as this would be one of our first times with all the girls together. I also spoke to Lea that might and gave her a heads up but I made it clear that it was not for sure.

Regardless, the next day on my way to the cocktail reception I got a flat tire on Biscayne Blvd (not the safest place in town for two girls alone in a Bentley and gowns, jewelry, etc.), but we decided to call a cab and not let his ruin our night. By the time we got there the cocktail hour was way done. We had originally made plans to dine with other friends in that hotel that night, but then we went in to the gala to say our quick hellos, show Lea my support, tell her and all the girls how beautiful they all looked, have a drink and leave.

At no point did I think that Lea, a woman who has been to my house for my kids’ birthday parties, as well as I at hers, etc., would actually take part in such nonsense talk. That very week we had a dinner planned at her house with all the girls, and I planned and did take her a check to support her event. For the short time I was at the event that night I looked for a table with someone collecting money as they sometimes do but there was not. Never did I think it was a big deal. This is just dumb to me, as there was no issue, except that I saw just how shallow people can be. If the tables were turned I would have never spent two seconds of my time at my gala about a friend, who clearly decided to make a quick appearance for support, in such a way or going on about invoicing, etc. What terrible energy!

The worst part is that she stayed on the negative energy track and later sent me a certified mail, signature-required envelope with an invoice and photos of me at the event to prove that I was there. I have never laughed so hard. Clearly she has no tact, but I can’t get at her for that. I just grin and ignore it. She can fight and talk all day along about me with her so-called gala-committee (trash-talking committee) but I know that it does not affect me in any way. I was wrong about her and that less is a learned one. I don’t care for all that negative energy. She had her check the following week. I never ate. I never sat down. I was there a whole 20 minutes maybe. What is her drama?!? Wow…

So basically Cristy’s version is that she was showing up for a brief appearance per the invitation from Marysol Patton, who was acting PR rep for the gala, to show her support and compliment the other girls even after a dangerous flat tire situation and that she did not mooch in any way, hung for just a brief period and went on her way.  And later she received an invoice that included photos of her at the event as if she were a subject in some lame mystery novel!  I have to say well played Miss Cristy.  This all sounds above board to me folks, in the least it is verifiable that Cristy is no Salahi level party crasher.

Now on to Alexia Echevarria’s dissing an entire town situation and how that involves Cristy.  During the second episode Echevarria was quoted as saying the following in regards to the magazine Venue in which she is the Executive Editor:

“We distribute here in the city of Hialeah, which social-economic is not up there.  You see it’s not like Miami Beach.  It’s not like Coral Gables.  Our magazines there sell because the lower person wants to see you and they want to wear the dress you’re wearing.  They want to look like you.  They want to be at that event and they can’t so the closest thing they have is this magazine.” 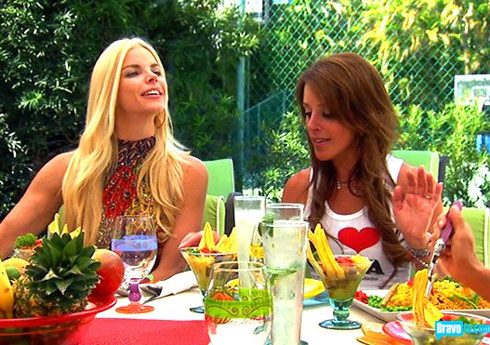 As you can imagine this is a PR nightmare that is causing anyone associated to flee like mice on a sinking Coral Gables yacht!  Well Cristy IS associated because she participated in a photo shoot for the magazine.  Here’s Cristy’s blog impersonation of running away from a burning building:

As for Alexia’s comments about her magazine and her being the sought-after socialite who calls the people from Hialeah, “the lower people who want to look, dress, and live like her and her friends,” I am truly embarrassed for her. I am speechless, and I would just like to clarify to the people of Hialeah that although I did take part in a photo shoot with the girls for her upcoming issue, I did it without knowing that this is what she thought.

There you have it straight from Cristy.  So what’s your opinion of all this?  Personally I’m on both sides of the fence with the “hookergate” sitch and I can’t blame Cristy at all for distancing herself from Alexia’s inflammatory comments.