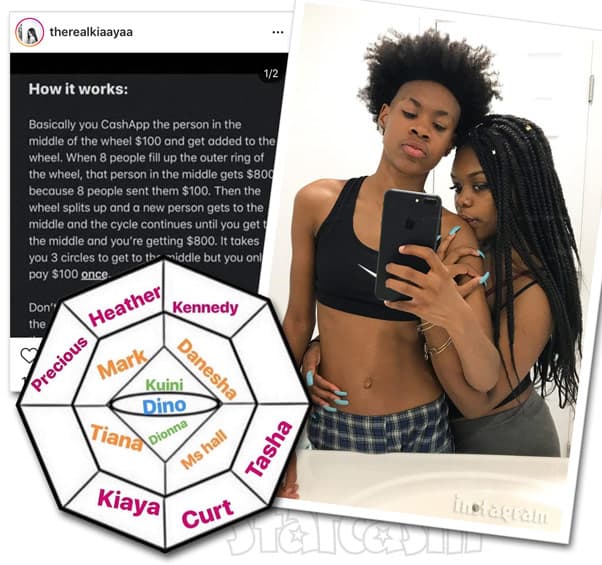 It doesn’t look like MTV’s Teen Mom: Young and Pregnant will be back for another season, and two of the cast members are looking to cash in on their exposure by luring their social media followers into an online pyramid scheme.

Kiaya Elliott and her girlfriend Teazha are pushing something called the “Blessing Loop” to their social media followers. The scheme, which has other names like “loom circle” and “fractal mandala,” uses concentric shapes instead of a triangle to illustrate how it works. The end result is essentially a top view of the typical pyramid scheme graphic.

Here are some of the posts and sales pitches used by Kiaya on Instagram over the past couple days:

Don’t think you wont get your money because the people under you already put money in so they are going to make sure they get to the middle also. Everyone gets paid because everyone wants to get to the middle and everyone will as long as we keep getting people to sign up. Not a scam, just an easy way for people to get some extra money. *** It’s not a pyramid scheme, once you’re in the middle and get your $800 you’re out and have to pay $100 again to re-enter.***

This isn’t a scam nor AD. This is called the BLESSING LOOM. It cost $100 to be added to a group. Your name will be placed in the circle. The sooner more people join the soon the person in the middle collects and you move up. MIDDLE PERSON COLLECTS $800, and so on and so on. It’s all about promo, $100 turns in $800 and u can be added in multiple groups

Teazha has been sharing a lot of the same posts and similar defenses. The two of them are being called out in their own comments sections, on other social media accounts, and in Teen Mom forums. Both of them continue to insist it is not a scam, and point out how much money they (and those close to them) have made already as a defense.

Here are a couple comments from Teazha defending the Blessing Loop on an Instagram post by @teenmom.tea highlighting one blessed participant who got ripped off:

@teenmom.tea: Fans are calling out Kiaya, from Young and Pregnant, for scamming people! Swipe to read about someone’s first hand experience! Thoughts?

TEAZHA: She not scamming people why y’all posting this trying to paint that image of her and don’t even know what y’all talking about.

TEAZHA: You don’t even know what you talking bout we could do that but we not them type of people we been investing our money staying in the groups to help people out bringing more people in so mind your business and sit there and be scared SCARED MONEY DONT MAKE NO MONEY

Giving Kiaya and Teazha the benefit of the doubt, it is possible that they simply do not understand the basics of a pyramid scheme or Ponzi scheme. Given their large social media following, they are both probably making money doing this, and they could assume that it’s that simple for everyone. They don’t realize that if you have 12 or 100 or 100,000 people who all put $100 into the “Blessing Loop” that not everyone can walk away with more than $100. And the more of a return that you are making ($800 from a $100 investment for example) just means there are that many more people who will not get their money back. Putting money into the loop doesn’t create additional funds. It’s VERY basic math.

Perhaps an illustration will help them understand that changing the geometry doesn’t mean it isn’t a pyramid scheme: 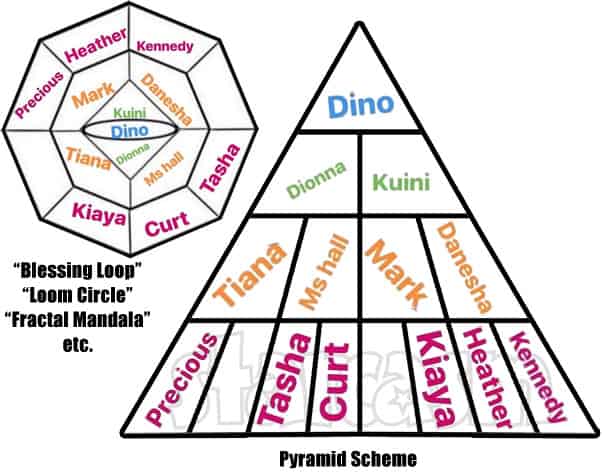 And if the illustration isn’t enough, perhaps Jim Halpert explaining it in a video will do the trick. Simply replace calling cards with absolutely nothing, and change Phil and his Corvette to Kiaya with her CashApp screen caps:

Are Kiaya and Teazha breaking the law by running their “Blessing Loop” pyramid scheme? My guess is that there is a very good chance they are. Plus, they are receiving funds from users in multiple states, so that might be putting them at risk for committing a federal crime.

Here is a screen cap from FindLaw.com of the anti-pyramid scheme and anti-Ponzi scheme provision of the Virginia statute where Kiaya and Teazha live: 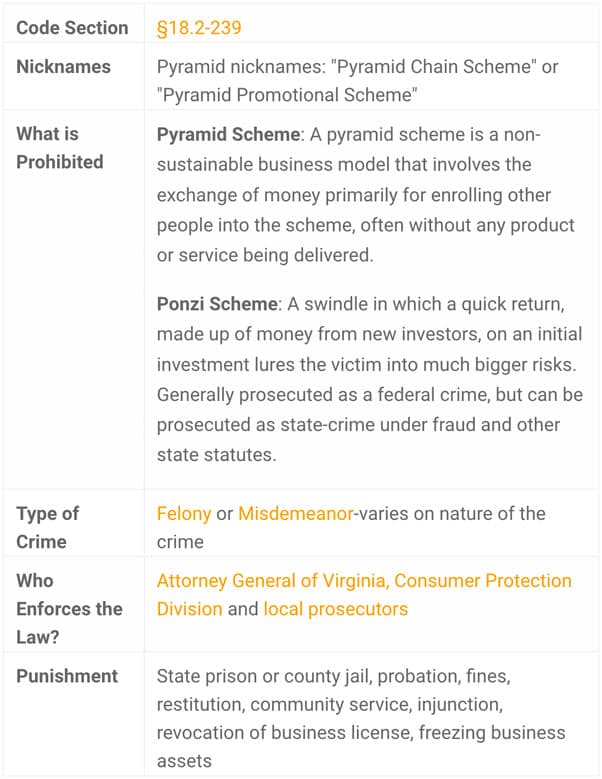 I checked the Instagram account for Kiaya’s mother Tiffany, and so far there is no mention of the “Blessing Loop” on her page.

For those curious to know more about pyramid schemes and Ponzi schemes, the Federal Trade Commission has a page with TONS of information. Here are some excerpts:

What is a Pyramid Scheme / Ponzi Scheme?

Pyramid schemes now come in so many forms that they may be difficult to recognize immediately. However, they all share one overriding characteristic. They promise consumers or investors large profits based primarily on recruiting others to join their program, not based on profits from any real investment or real sale of goods to the public. Some schemes may purport to sell a product, but they often simply use the product to hide their pyramid structure…

A Ponzi scheme is closely related to a pyramid because it revolves around continuous recruiting, but in a Ponzi scheme the promoter generally has no product to sell and pays no commission to investors who recruit new “members.” Instead, the promoter collects payments from a stream of people, promising them all the same high rate of return on a short-term investment. In the typical Ponzi scheme, there is no real investment opportunity, and the promoter just uses the money from new recruits to pay obligations owed to longer-standing members of the program. In English, there is an expression that nicely summarizes this scheme: It’s called “stealing from Peter to pay Paul.” In fact some law enforcement officers call Ponzi schemes “Peter-Paul” scams…

Both Ponzi schemes and pyramids are quite seductive because they may be able to deliver a high rate of return to a few early investors for a short period of time. Yet, both pyramid and Ponzi schemes are illegal because they inevitably must fall apart. No program can recruit new members forever. Every pyramid or Ponzi scheme collapses because it cannot expand beyond the size of the earth’s population. When the scheme collapses, most investors find themselves at the bottom, unable to recoup their losses.

This sentence from Kiaya’s post promoting the scheme seems completely self aware that it cannot go on indefinitely and must eventually collapse — leaving lots of people high and dry: “Everyone gets paid because everyone wants to get to the middle and everyone will as long as we keep getting people to sign up.”

If you’ve lost money by participating in the “Blessing Loop,” I suggest you reach out the FTC and whichever social media platform/account was promoting the scheme. The FTC has a page set up to receive complaints. CLICK HERE and then select “Education, Jobs, and Making Money.” You will see an option to select “Multi-Level Marketing or Pyramid Schemes.”