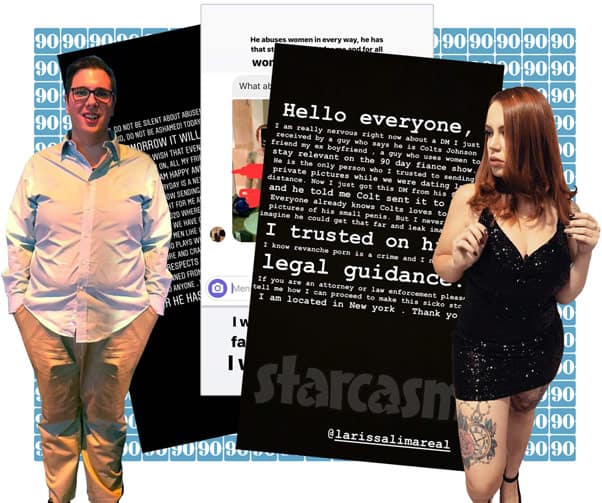 It’s been a minute since we’ve had any drama from 90 Day Fiance: Happily Ever After couple Colt Johnson and Larissa dos Santos Lima. The drama armistice has just ended, though, as Colt’s ex-girlfriend Jess Caroline steps forward to accuse him of sharing nude photos she sent him. Larissa, who has also accused Colt of sharing her nude photos with others, responds by showing support for Jess.

“I am tired of all the abuse I had in my old relationship and I still have it!” Jess declared in the first of a series of posts on her Instagram story. “Enough, I can’t take it anymore! I’ll tell you the whole truth…no woman needs to go through this.”

In case you missed it, Colt and Jess dated for a few months last fall. They reportedly filmed for TLC, including a trip to her home country of Brazil.

Jess, who speaks English as a second language, shared this lengthy post explaining the alleged event that got her so outraged:

I am really nervous right now about a DM I just received by a guy who says he is Colts Johnson friend my ex boyfriend, a guy who uses women to stay relevant on the 90 Day Fiance show. He is the only person who I trusted to sending private pictures while we were dating long distance. Now I just got this DM from his friend and he told me Colt sent it to him. Everyone already knows Colts loves to leak pictures of his small penis. But I never could imagine he could get that far and leak images that I trusted on him.

I know revanche p*rn is a crime and I need some legal guidance. If you are an attorney or law enforcement please tell me how I can proceed to make this sicko stop. I am located in New York. Thank you.

Jess then tagged Larissa and penned this lengthy message in all caps:

HEY GIRL!!! DO NOT BE SILENT ABOUT ABUSE! DO NOT BE SILENT BY THREATS, DO NOT BE AFRAID, DO NOT BE ASHAMED! TODAY I’M GOING THROUGH THIS, IF I DON’T SPEAK TOMORROW IT WILL BE ANOTHER. WOMEN. GET HELP! I DO NOT WISH THAT EVEN FOR THE WORST ENEMY ALL THE SUFFERING THAT GOES ON, ALL MY FRIEND KNOWS, HOW MUCH I CRIED AND SUFFERED. TODAY I AM HAPPY AND HE KEEPS TRYING TO ABUSE ME PSYCHOLOGICALLY! EVERYDAY IS A NEW DM FROM SOMEONE RELATED TO HIM, CALLING ME NAMES AND NOW SENDING PICTURES I SENT HIM IN THE PAST. I WILL NOT SHUT UP, I WILL FIGHT FOR ME AND FOR ALL! LET’S GET TOGETHER, LET’S EMPATHIZE! WE ARE IN 2020 WHERE WE WOMEN HAVE OUR SPACE, IN THE 30B MARKET, IN SOCIAL LIFE. WE HAVE OUR RIGHTS AND RIGHTS! IN THE MIDDLE OF 2020, WE CAN’T LEAVE MEN LIKE LOOKING LIKE HERO, LIKE THE GOOD MAN OF THE MOTHER! MAN WHO PLAYS WITH WOMEN FOR FAME, WHERE HE SAID THAT BRAZILIAN IS ALL WHORE AND CRAZY AND WOULD BE GREAT FOR HIM, DISCLOSES MY PHOTOS, DISRESPECTS MANY WOMEN! ENOUGH, LET’S STOP IT! HE SHOULD BE BANNED FROM THIS SHOW FOREVER, HE HAS NOT DOING ANYTHING NICE TO ANYONE. HE LIKES ATTENTION AND MONEY AND WILL DO WHATEVER HE HAS TO DO TO GET TV TIME AGAIN.

Jess also posted screen shots of DM messages with a man named Sena, who claimed to be a friend of Colt’s. The messages included a nude selfie of Jess taken in a bathroom mirror. “What about this?” Sena wrote along with a finger pointing emoji. (The photo was censored in Jess’s post, but it’s unclear if it was censored when Sena sent it.)

“What, Colt send to you?” Jess replied.

Along with the screen cap, Jess wrote: “He abuses women in every way, he has [to] stop! I will fight for me and for all women! I won’t shut up. I will not shut up in the face of this situation. I will stay strong!”

In addition to the alleged messages with Sena, Jess also shared another screen cap of text messages with another male friend of Colt’s from last year. The person says that Colt showed him galleries of nude photos on his phone that included both Jess and Larissa: 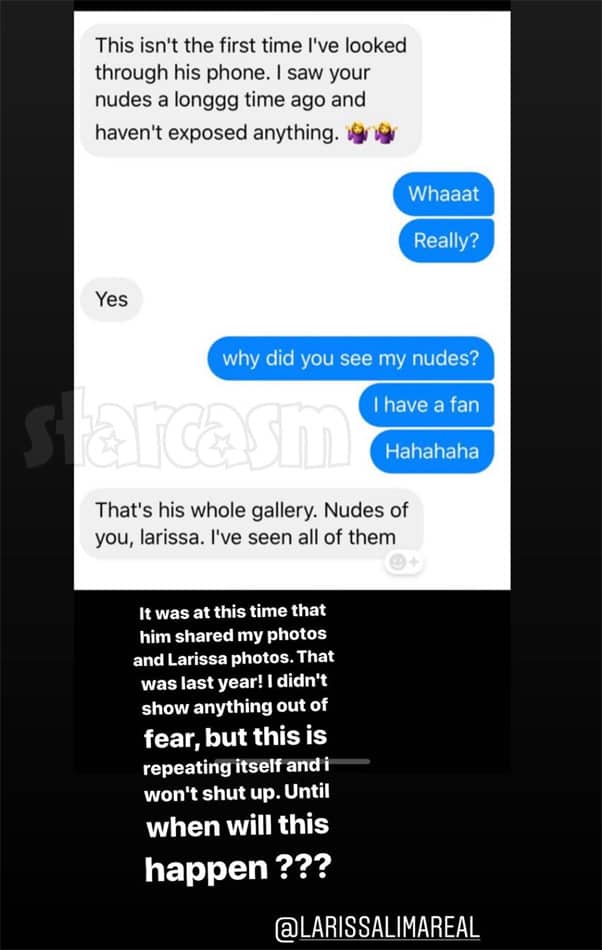 Larissa replied to Jess in her own stories, sending this message in Portuguese:

The English translation from Google translate:

Wow, horror and little my ester friend going through the p*rn vengeance we are going to give strength to her Unfortunately she is going through it

Larissa then re-posted Jess’s lengthy statement above (the one that isn’t in all caps) in its entirety, but with Colt’s name covered up. (I assume that is due to their divorce settlement stipulating that the two of them cannot talk about each other publicly?) “Just reposting to help my Brazilian friend,” Larissa wrote.

90 Day Fiance: Before the 90 Days Season 1 star Cortney Reardanz shared her support for Jess and other victims of revenge p*rn in the comments section of one of John Yates’ posts about Jess’s allegations. “I went through something similar,” Cortney revealed. “My heart goes out to any woman dealing with this it’s awful and you feel hopeless. Stay strong .. @jesscaroline_ look into extortion, blackmail, harassment, cyber bullying and revenge p*rn ❤️ all are illegal and I think it’s worse when it’s over state lines (I talked to a lot of lawyers/cops in the past.. but the law varies sometimes based on your city).. Screenshot & copy the IP address of the profiles. Consider a restraining order. Good luck ❤️”

How far a reality tv star can go go to stay relevant?

Revanche p*rn is terrible! Jess’s season is not even live yet but they are already trying to portrait her as a bad person. People don’t know the damage it can cause in someone’s life. Jess works with children and I can’t imagine her shame and pain right now. No woman should be put in this situation by a man she loved and trusted. It is disgusting! I know it is going to be a long night sis. But I am here for you.

Strangely, Jess’s relationship status on Facebook indicates that she is currently dating musician Brian Hanvey. Fans may recall that name because Brian befriended Larissa and Eric and featured the couple in his racy music video for the song “If I Scream In My Sleep” last year.

Speaking of relationship status updates, after Colt dated Jess, he reportedly moved on and started dating another woman named Vanessa Guerra. Larissa and Vanessa crossed Instagram paths back in October as Larissa alleged that nude photos she had sent to Colt were given to Vanessa’s ex-husband. “I have SCREENSHOTS that VANESSA GUERRA have my conversations with my former HUSBAND sent to her husband my n*des and SHE HAS My n*des! SCREENSHOTS!!! SHE CANNOT DENY!!!” Larissa angrily wrote. (According to court records, Vanessa and her husband of nearly seven years were officially divorced in early October of 2019.)

So far, neither Colt nor his mother Debbie have responded to Jess’s allegations or Larissa’s show of support for her.

The Queen is single! #90DayFiance #HappilyEverAfter star @limalarissareal and boyfriend Eric call it quits after 8 months. In her announcement, Larissa says she is in no hurry to find a new kingee as she plans to focus on herself. https://t.co/2XuHpLRBTu

Larissa is now back with her boyfriend Eric Nichols after their split in September. She and Colt have both reportedly been filming with TLC, but it’s unclear for what show. There have been reports that one or both will be back for Happily Ever After, but nothing has been confirmed yet.

In addition to responding to Jess’s accusations, Larissa also posted a lengthy statement on her relationship with Colt in hopes of clarifying some things:

I left that home with only $38 to rebuild my life from scratch. I want to leave the past behind and not be part of a plot twist for a story line that is as boring as watching paint dry.

I recently read an article regarding my ex-husband and my relationship, in his words. It is only right that my side is also known. There are some inaccuracies, that I want to correct.

There seems to be an implication that I want contact with him. This is absolutely false. I have been in a relationship with another man for over 14 months. My ex himself is living with his girlfriend.

While I’m pleased he is losing weight, it is also inaccurate that I made him fat. During our marriage, I encouraged him to go to the gym and eat well. The show had filmed this but edited out my efforts to get him healthy. Only to show when I insulted his weight in anger in the final shows.

My ex, my ex mother in law are the past. Once, they were family, but it is done.

In an episode of 90 Day Quarantine I’m discussed between the two, while they are not spoken of in my home.

"I never thought it would happen in my lifetime." Colt and Debbie invite you into their home, Monday at 9/8c on the new limited series #90DayFiance: Self-Quarantined.