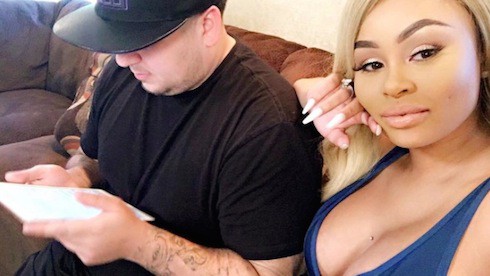 It’s almost the weekend, which means it’s almost time for a new episode of Keeping Up With The Kardashians spin-off Rob & Chyna, which means the Kardashian rumor mill is at it again. A new report alleges–once more–that Blac Chyna cheated on Rob Kardashian during their brief, frenzied courtship, and that the baby she’s currently carrying is not his. But these particular allegations couldn’t come at a worse-slash-better time for Blac (and Rob), who are already dealing with the fallout from a separate report claiming they might have potentially engineered everything about their relationship, up to and including Blac’s pregnancy, in order to score a fat reality TV deal with Kardashian home network E!.

The report also attaches a specific name & face to the previously anonymous would-be father. According to the just-breaking spate of rumors and allegations, Blac had a fling with Pilot Jones, best known for his time on Glee.

Apparently, what happened is Blac and Rob were on a break in March–or about six weeks after they began dating (and, if Blac is due in mid-November, while she was actually already pregnant in the first place), and she started seeing Pilot on the DL. Then, when she and Rob got back together, Blac simply continued to see Pilot, because that is what you do when someone looks the way he does in that photo up there.

The strongest piece of what’s being called evidence to support this set of claims is an Instagram video of Pilot and Blac together at a club from this past March:

“When that baby comes out, it’s going to be brown,” said the report’s source, evidently forgetting that the mother of the child is also brown. The source added that “The truth will come out eventually,” which of course it won’t, since 90-odd percent of everything the Kardashians do is steeped in more rumor than the kratom in a heroin addict’s tea.

Nonetheless, the person quoted in the report remained defiant: “Pilot is the dad.”