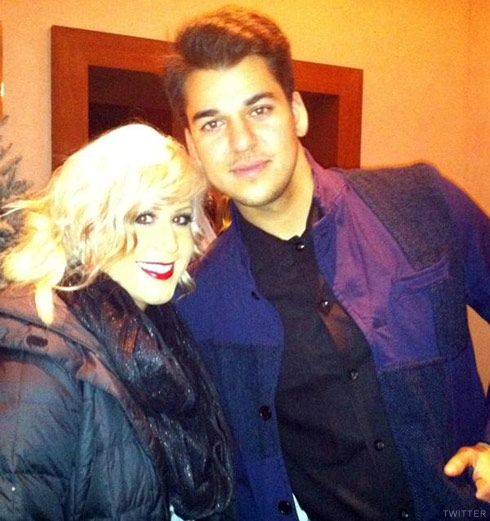 Teen Mom and The Kardashians ambassadors Chelsea Houska and Rob Kardashian met in New York City this evening to see if they couldn’t iron out the animosity between the two reality show families after Farrah Abraham recently stoked the flames with some disparaging tweets about Rob’s sister Kourtney and her boyfriend Scott Disick, who had just announced they are expecting their second child.

For those unlearned in the history of this epic and historic feud, it was originally sparked by Kim Kardashian who posted a blog that suggested shows like Teen Mom were making teen pregnancy glamorous, to which Amber Portwood and Jenelle Evans each responded.

But that may all be in the past now thanks to South Dakota diplomat extraordinaire Chelsea Houska and smooth movin’ DWTS vet Rod Kardashian, who met up at the New York City hotel where Chelsea is staying just moments ago! no word on how the peace talks are going…

Of course I’m joking about the whole “Peace Talks” thing – Rob just happened to be DJing in the same hotel where Chelsea was staying. Here are the tweets from Chelsea: 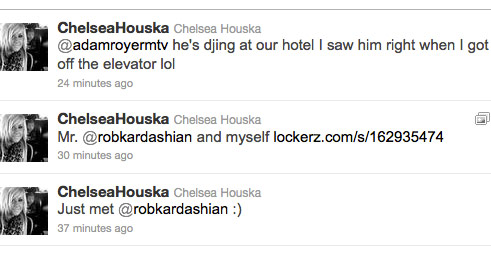 As you probably know, Chelsea was in New York this week to do promotional stuff for the Season 2 premiere of Teen Mom 2 (including appearing on Good Morning America yesterday!) and Rob Kardashian was in New York being Rob Kardashian. (Knock on wood, but I think this could be the first step in seeing one of the Teen Moms on Dancing With The Stars! I assume Farrah will be the first to volunteer.)