Are Blac and Rob still engaged? It’s the question of the hour, thanks to a flurry of rumors and photo deletions–but it looks like the most recent high-profile couple in the Kardashian family is back on track for their wedding. However, according to a Hollywood Life report, things were touch-and-go for 24 to 48 hours this week; in the site’s words, the wedding was ultimately “canceled.”

The primary evidence suggesting a serious split, though, was the fact that both Blac and Rob disappeared from social media–and Rob went on one of his infamous Instagram binges, deleting every single photo attached to his account–for nearly a full week. “Neither Rob Kardashian, 29 or Blac Chyna, 28, [gave] any indication on their social media that all is well again between them,” despite prolonged silence–and an IB Times article on the topic further claimed that the pair broke up due to controversy over their baby’s 4-D ultrasound results.

That allegation–which the article pointed out was “strange,” apparently had to do with rumors that the 4-D ultrasound revealed Blac’s baby was “100% African-American,” meaning Rob thought he’d been duped, scandalized, and humiliated. For a time, it was believed that Future, with whom Blac has a history, was the father. But, in the end, nothing about the parentage was confirmed. And shortly after that rumor took flight, Blac and Rob appeared on social media together for the first time in nearly two weeks, leading at least one outlet to imply (tongue firmly in cheek) that social media had both broken the pair up and gotten them back together:

On a related note, Blac Chyna recently tickled some fans, puzzled others, and disgusted a vocal minority with an Instagram update involving an illustration of a fetus in utero: 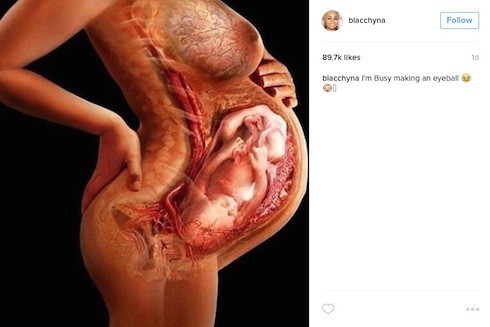 “I’m busy making an eyeball,” Blac captioned the photo, and added the “crying with laughter” emoji. But, since eyes form during the first trimester, it’s possible that Blac was simply trying to get a rise out of people. (Or that she’s been misleading everyone about that alleged October due date.)

Blac Chyna baby prognosticators say it’s a girl, but it could be a boy (or both)

(Photo credits: Are Blac and Rob still engaged via WENN.com)