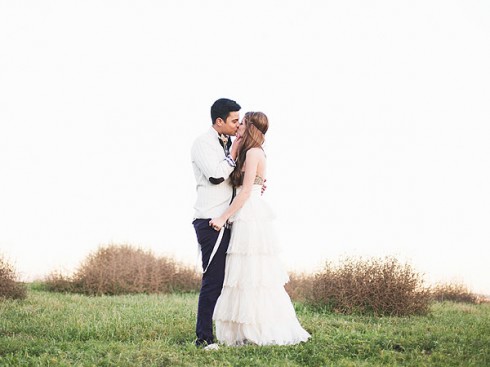 Daniele Donato and Dominic Briones tied the knot at the Newland House Museum in Huntington Beach, California, after meeting nearly two years ago on the set of Big Brother 13. The former co-stars have been together since the show, but at first, Daniele wasn’t too impressed with Dominic.

“Truth be told, I really didn’t like him at first. I thought he was a little troublemaker. But we became friends, and although I didn’t like him like that, it just grew,” Daniele explains to People magazine. “After the finale, we became inseparable. We got to know each other really well, and we fell in love!” 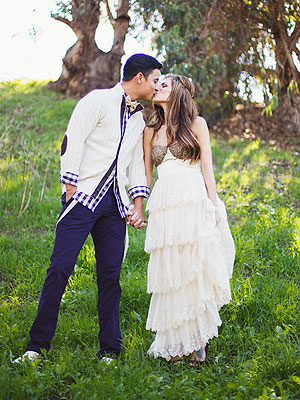 Once Dominic realized that Daniele was the woman he wanted to spend the rest of his life with, he plotted out the perfect proposal — and the perfect ring. “I took Dani on a road trip last August and we stopped at the St. Louis Zoo,” he says. “We both love penguins, because they mate for life, so I set up a behind-the-scenes tour without her knowing. One of the zoo workers brought out two little penguins. As we were playing with them, I turned and popped the question right there. She loved it!” And she also loved her ring which was a solitary diamond with a half bezel set.

As for their wedding attire, the couple kept it simple. The bride wore a dress from Anthropolgie’s wedding line BHLDN and the groom wore dark purple pants from Gap with a plaid purple shirt and sweater.

During the ceremony, Daniele was walked down the aisle by her grandmother while The Beatles’ “All You Need Is Love” played in the background. There were 120 guests in attendance, including Big Brother and Amazing Race couple Brendan and Rachel Reilly Villegas.

While they haven’t taken a honeymoon yet, they do have plans to do so. However, their plans aren’t exactly plans. “I’ve always wanted to go to an airport and take the next flight to wherever it goes out,” Dominic reveals. “That’s what we’re going to do.”

“I don’t care where we go for the honeymoon,” says Daniele. “All I care about is that I married my best friend, and we’re going to share our lives together. We mesh so well. We don’t like being away from each other. We love being around each other so much. That’s enough for me. I couldn’t be happier.”

PHOTOS What Kim Kardashian shopping for a wedding cake looks like