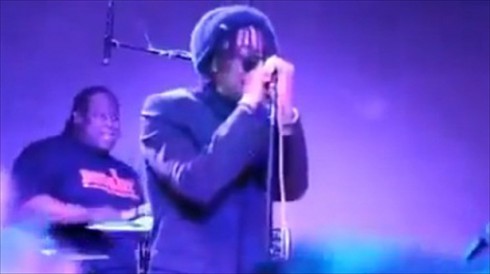 It seems rapper Lupe Fiasco lived up to his surname during Sunday night’s pre-Inauguration StartUp RockOn event in Washington, D.C. According to reports, Lupe went on an anti-war tirade during his scheduled performance, admitting he hadn’t even voted for President Obama, which led to him being tossed from the stage.

“Lupe Fiasco just got thrown off stage here at the Hamilton Live after he went on an anti-Obama diatribe mid set,” The Cable‘s Josh Rogin tweeted, later adding, “Lupe played one anti-war song for 30 min and said he didn’t vote for Obama and eventually was told to move on to the next song. Lupe refused to move to the next song so a team of security guards came on stage and told him to go.”

However, the people who organized the event claim that although he was removed from the stage, it wasn’t because of his opinions of Mr. President.

“Lupe Fiasco performed at this private event, and as you may have read, he left the stage earlier than we had planned. But Lupe Fiasco was not ‘kicked off stage’ for an ‘anti-Obama rant,’” they said. “We are staunch supporters of free speech, and free political speech. This was not about his opinions. Instead, after a bizarrely repetitive, jarring performance that left the crowd vocally dissatisfied, organizers decided to move on to the next act.”

This isn’t the first time a rapper has been critical of the President. Back when Bush was running the country Kanye West had told the world that “George Bush doesn’t care about black people” during a Hurricane Katrina benefit.

VIDEO Boy is “Dizzaaaayy!” from anesthesia after surgery