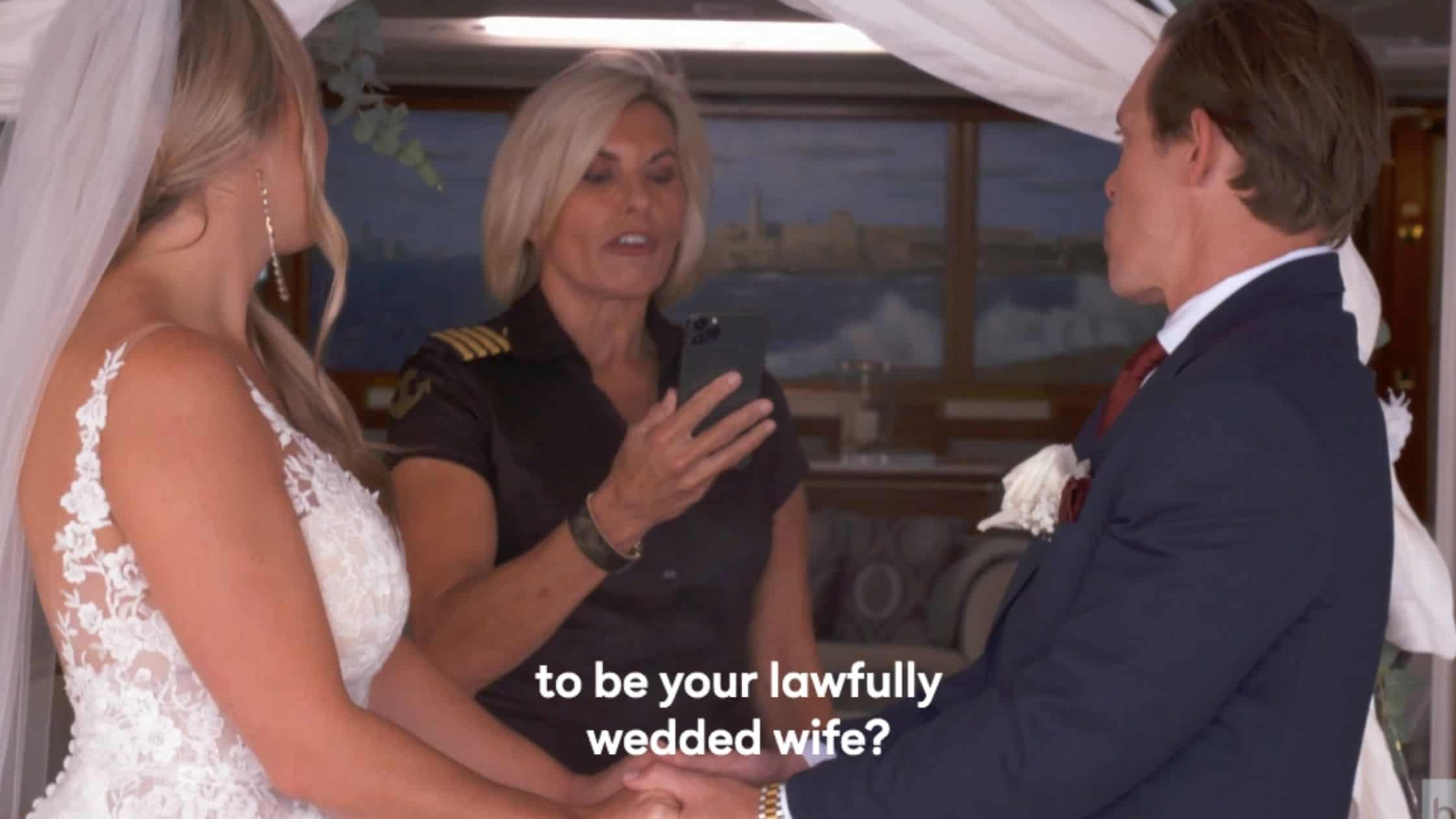 Captain Sandy got to perform her first-ever wedding at sea on episode 3 of Below Deck: Mediterrean Season Six, which airs tonight on Bravo. The boat was chartered by Perez and Lee Percenti, who work in real estate and hospitality management in Austin, TX.

The charter, which occurred off the shores of Croatia on the superyacht the Lady Michelle during the early months of COVID-19 in 2020, started off with a stressful note because the chef injured himself and had to leave the boat fro an MRI.

Because of COVID safety precautions, they could not call for another chef to come on board right away. At the time chefs were required to quarantine for at least seven days. Thankfully, Chef Mathew recovered and was able to make the rest of the charter one to remember. He also prepared an amazing wedding dinner for the bride and groom.

The wedding for guests Karry and Clint almost didn’t occur, though, because the night before the nuptials everyone got a little too drunk and the bride had a meltdown. By the end of the night, Karry was crying about how she didn’t want to marry Clint.

The next morning brought a different perspective, and Karry was ready to go through with the life-changing ceremony. The stewardesses and deck crew worked hard to decorate the yacht for their big day. Clint and Karry’s original wedding plans had been derailed, presumably by COVID-19, so this yacht wedding was very special to them.

Clint was thrilled to see a huge rainbow appear in the sky right before the ceremony. Later Karry revealed that the rainbow had an even more personal significance to her. A psychic told her mother that her grandfather would show up on her wedding day as a rainbow.

Cheif Stew Katie Flood was very touched by this as she also has a signifier for her grandfather: a moth.

After the wedding vows, the chef prepared some canapés as the guests mingled.

The first course was local seared scallops on a celeriac purée topped with truffle popcorn. Main course was a rack of New Zealand lamb on ratatouille, a soft-cooked polenta with parmesan, and chocolate and red wine sauce.

There was almost a huge disaster when Chef Mathew dropped the wedding cake. Thankfully the damage done was minimal, and easily covered over with frosting.

The guests were pleased with the service they received while onboard, and gave the crew a $25,800 tip, which came to $1718 per person.