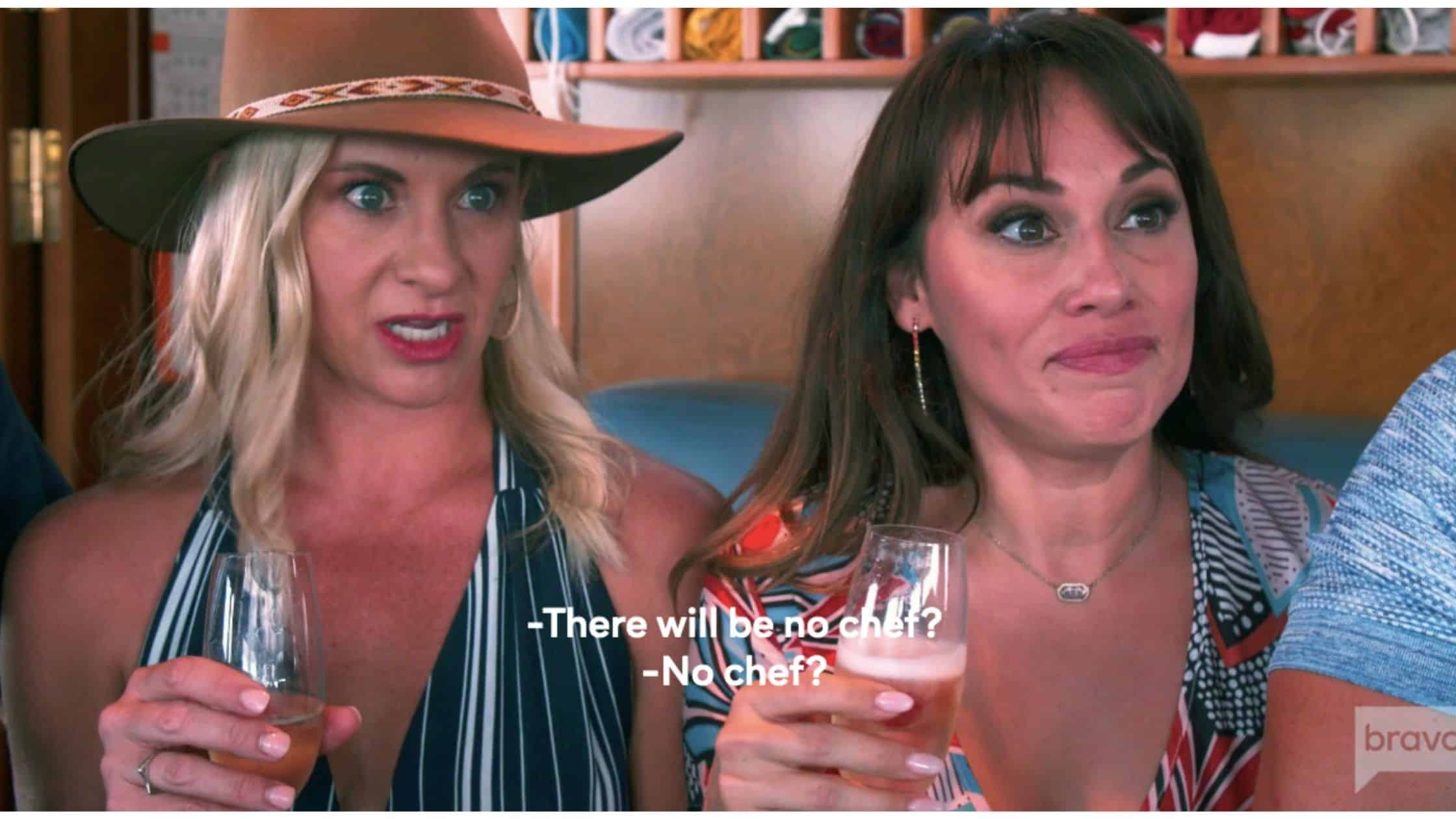 In the first two episodes of Below Deck: Mediterranean Season 6 Captain Sandy dealt with a punishing blow that is hard to recover from in the time of COVID: her chef injured his knee before the charter and needed medical attention.

In episode one, Chef Matthew took a tumble while stocking a massive order on the new boat. He tried to carry on prepping and planning meals but found himself in excruciating pain. He prepped lunch for the charter guests and then told Chef Sandy that he could not continue. She arranged for him to get an MRI, and everyone else on staff, none of which have training with cooking, worked on dinner. 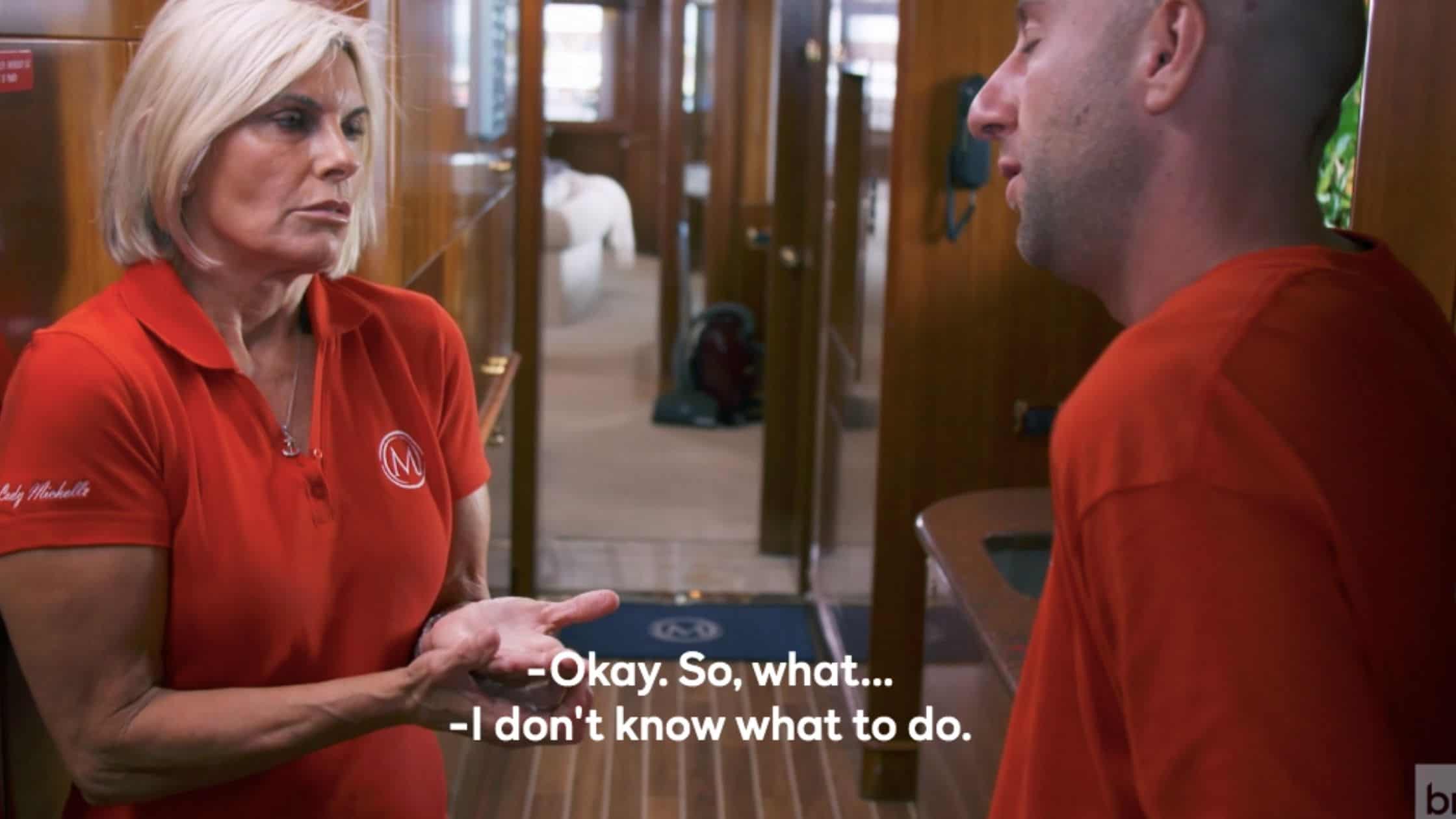 Because of COVID, Sandy could not arrange for a new chef to come on board at a moment’s notice because chefs were required to quarantine for at least seven days.

Captain Sandy decided they would do surf and turf for dinner, but no one knew how to cook lobster or serve oysters. They asked for help from a sous chef from another ship, but when she arrived she was also out of her element with all the seafood, and focused on the steak instead.

The guests were there from Austin, Texas, and were expecting a mind-blowing experience on a megayacht. They even asked for a wedding ceremony to be performed on the third day of their trip, officiated by Captain Sandy. Co-primary guests Clint and Karry were forced to cancel their original wedding plans, presumably because of COVID, so they wanted to make up for that with this special intimate ceremony.

Dinner on the first night, which was supposed to be a neon dance party celebrating guest Jordan’s birthday, was highly disappointing for them as the oysters were grilled without seasoning, and the lobster was overcooked. Furthermore, the neon dance party consisted of a few glow sticks presented on top of their dinnerware.

They raised their concerns with Captain Sandy, and asked for a better experience going forward. Of course, considering that guests pay between $140-300k a week for this experience (Below Deck guests are actually paying half price as a perk for being on the show) having well-prepared meals onboard is a reasonable expectation. Everything has changed because of COVID, though, so it’s understandable that more unexpected service experiences have happened since the pandemic started.

UPDATE: Primary charter guest Terez Lauren has since revealed on Another Below Deck Podcast that the surf and turf meal that got butchered without a chef was supposed to be the wedding dinner.

“I have to add that they didn’t read our preference sheet,” Terez said on the podcast “Because had they actually read it, we asked for steak, surf and turf, on the wedding night. We were eating this and were like, ‘This is the wedding night food, yo!’ Like y’all could have made us nachos and it could have been OK. And here’s the wedding night food getting butchered!” She laughed about how she would have loved one of the crew’s paninis too.”
She also said that she asked them to just order take-out food for them, and she’s still confused about why that didn’t happen.

Lee Percenti, co-primary on the charter, joked he would not have minded cooking the food himself so it would not be ruined mishandling. “You got lobsters, you got oysters, you got steaks. We’ll make sh–t happen. We’ve been doing it for eight days,” he said, referencing the fact that they had to quarantine for eight days before getting on the boat, and presumably had to cook for themselves during this time. “I don’t mind doing this. It’s better than just butchering these poor lobsters. All you had to do is open those oysters, put some olive oil, salt, pepper on them.”

The next morning Chef Matthew was supposed to be back, but he was still MIA. On top of it, the weather was really grey and windy.

Meanwhile, Captain Sandy was working on getting backup chefs and chief stews in quarantine that she can ask for in case any other issues arise. She’s faced pirates before on ships but had never had to run a boat without a chef.

The crew got to work making up a fruit plate without a chef, but thankfully the chef called in to say that his MRI results came back fine and although he is still sore, he wants to come back on the boat and work.

Back on the boat, Chef Matthew reveals that he suffers from anxiety that is always eased when he serves the guests their first meal. He has even left jobs before because of anxiety. Instead of facing that yesterday, he says he just left. Third Stew Courtney notices that he’s not really limping, so it’s unclear if his knee pain or his anxiety was the most crippling condition for him. Chief Stew Katie Flood was also skeptical about the extent he was physically injured because she has a hard time trusting chefs.

Of course, it’s difficult to access another person’s pain level, and Chef Mathew does state that he’s still in pain, though he does seem to be moving better and less distracted than the day of his accident.

Matthew then asks Sandy if they can order the wedding cake out, and have all crew meals ordered out so he can focus on making the rest of the food for the trip. They decide to make the crew some quick paninis so the chef doesn’t have to worry about feeding the boat’s staff.

For lunch, he serves up feta and potato roasties with local mussels and local chorizo, which the guests loved. “He totally redeemed himself,” they said as they tucked away at the mussels. They finished with a lovely chocolate mousse dessert.

Dinner starts with a fantastic truffle pasta that was a clear winner. 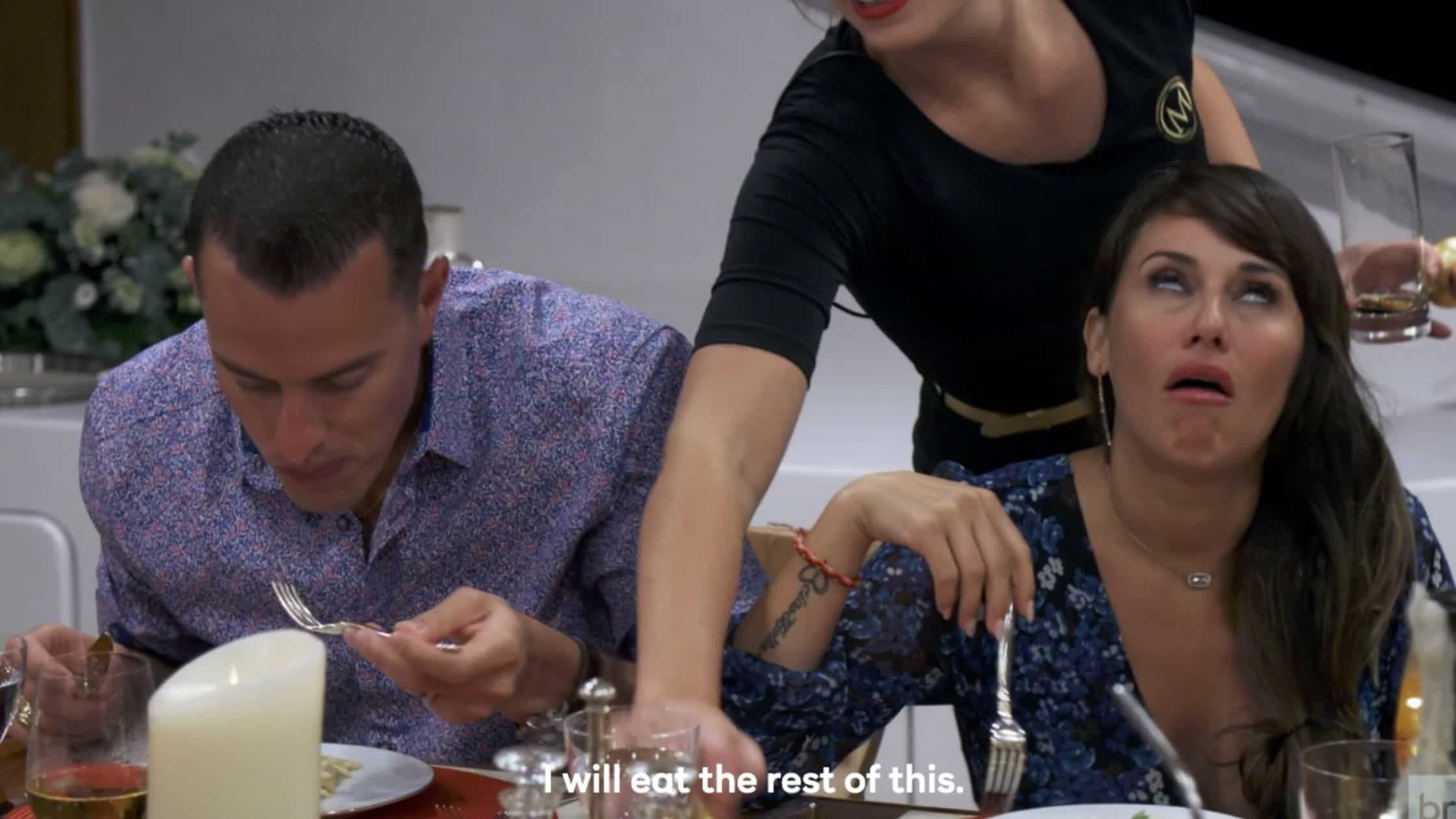 The wind picked up before the second course, which brought a chill and knocked over a wine glass. The dinner had to move inside because of this uncomfortable weather condition. Chef Mathew was working on a fish dish that’s best served hot, but because the guests had to move the plated fish had to sit around long enough to get cold.

This second course was a whole roasted local with tomato, white wine, and caper sauce. The third course was a crème brûlée, and the guests enjoyed it all.