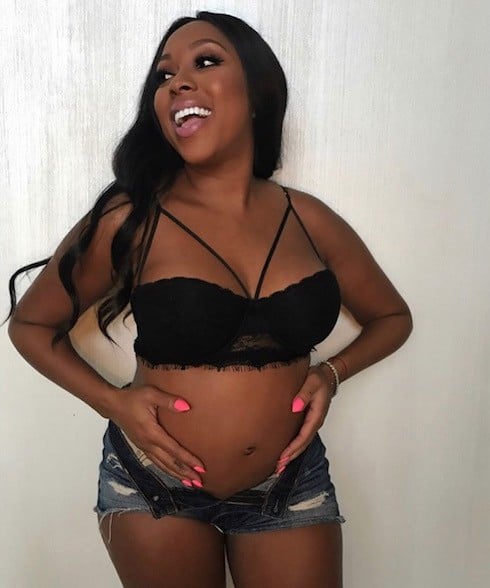 Huge congratulations are in order for Kijafa and Michael Vick, the star couple of Baller Wives, VH1’s newest sports-based reality TV enterprise. The two recently announced that they’re expecting their third child together, and first in quite awhile: oldest daughter, London, is 13 years old; soon-to-be-middle child Jada is 10. Neither Kijafa nor Michael have announced whether they know the gender of their third child.

But one thing Kijafa hasn’t hesitated to share are some curve-flaunting, über-flattering bikini photos from smack in the middle of her second trimester. The most recent came just days before the Baller Wives Season 1 premiere, and doubled as an update, letting us know that Kijafa is 23 weeks pregnant:

Same suit new belly …..Life had unexpected plans for me but I am so happy for this blessing #godsplan ?#23weekspregnant I AM NOT PREGNANT ON THE PICTURE TO THE LEFT

(It’s worth noting that Kijafa is at 22 weeks in the photo at the top of the article. Also, you have to wonder what kinds of comments Kijafa’s been getting about her bikini photos when she has to go back and add “I AM NOT PREGNANT ON THE PICTURE TO THE LEFT.” #internet)

And in this Kijafa Vick bikini pic, the 37-year-old stunner hadn’t yet announced she was pregnant. The official Instagram announcement came three weeks later; in the shot below, Kijafa is 15 weeks along:

Congrats to both Kijafa and Michael Vick on he forthcoming addition to their family. (Kijafa is due around November 29th.) You can catch the couple in action–and, presumably, see their reaction to the news of Kijafa’s pregnancy–when Baller Wives airs Monday nights at 10 on VH1.

(Photo credit: How old is Kijafa Vick via Instagram)