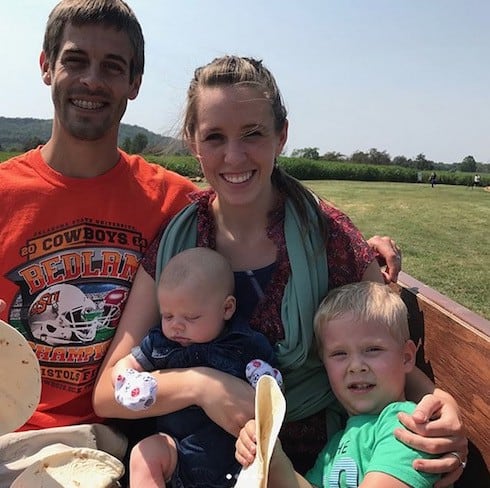 This weekend, Jill Duggar’s husband Derick Dillard was unexpectedly and unceremoniously fired from TLC hit Counting On. The network’s move came a day after Derick doubled down on anti-transgender comments aimed at fellow TLC star Jazz Jennings, who’d borne the brunt of Derick’s attacks for the past several months.

Additionally, Derick had raised eyebrows with an ongoing fundraising quest, the ostensible purpose of which was to send him to a “one-year ministry residency”–but which quest ran into continual trouble because Derick, despite his best efforts, is not a charity, and is thus ineligible to receive donations according to the terms of service of his chosen fundraising sites.

So his were hardly Josh Duggar-level controversies. But, by drawing negative attention to himself and his family with seemingly every action (the fundraising issue came in the middle of reports that Derick may, potentially, be cheating on his wife, and plenty of questions about where his money really comes from), he may have forced TLC’s hand. This past summer, we reported on rumors that network executives were worried Derick could become as toxic to the Duggar brand as Josh had been.

Three months later, with Derick still unable to keep from attacking a fellow network employee, it’s possible that those same executives decided that the 28-year-old was simply not as popular as Jazz Jennings–an unwilling adversary at best–and that cutting him loose from the Duggar ship was the easiest solution. (TLC’s statement on Derick’s fiting specifically mentions that the network is “proud to share the story of Jazz Jennings.”)

But TLC’s decision may have also had a much quieter (and more financially rewarding) purpose. The question “Is Counting On going to be canceled?” has hung over the 19 Kids and Counting spinoff since its debut two years ago. Josh Duggar may be gone, but the Duggar family remains divisive (as the comments section under any article about them will attest). Counting On‘s audience, while a good size, is smaller than the show’s early 2016 peak, and is nowhere near as large as the viewership 19 Kids used to command. Just two weeks ago, we recounted the factors working against a Counting On renewal, while cautioning that it was still too soon to know whether TLC would bring down the ax.

Now, though, the show has lost its single most controversial participant. And, by taking sides with Jazz Jennings in its statement announcing Derick’s firing, TLC is shrewdly playing both sides of this particular cultural argument. The Duggar family may be divisive, true–but Derick is the most outspoken member of that family, and he’s no longer welcome in front of Counting On‘s cameras. TLC may air a show starring the Duggars, yes–but they’re also promoting diversity and togetherness by giving Jazz Jennings a platform of equal size.

In one stroke, TLC cut free some of the baggage associated with the Duggar name, ended for the foreseeable future all speculation about whether Counting On is on the chopping block–and ensured their own ability to profit from both the Duggars and the object of their ire.

(Photo credits: Is Counting On going to be canceled via Instagram)