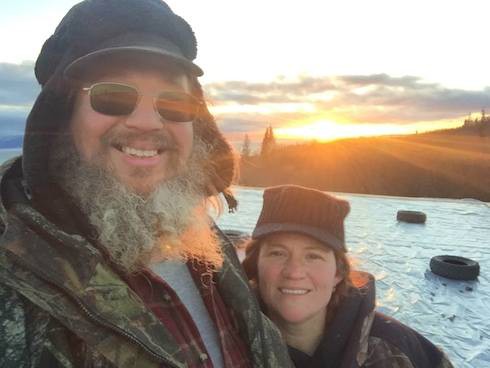 The latest Alaska TLF update brings a possibility that fans have long-dreaded: namely, that favorites Shane and Kelli Kilcher might be leaving the show before filming for Season 6 gets underway. Though the fifth season only just concluded, talk is widespread that the couple won’t be back for more homesteader adventures.

Fan speculation about the fate of Shane and Kelli Kilcher’s branch of the family has taken up most of the Alaska TLF update commentary since the season finale last Sunday. Lending credence to the rumors is the fact that Discovery does not credit Shane and Kelli Kilcher as members of the show’s main cast, nor does it include official bios for the pair on the show’s web site.

Since Kelli’s multiple sclerosis and Shane’s ongoing cabin construction take up a great deal of the family’s time–to say nothing of raising their four children–it’s being posited that contract negotiations between the busy couple and the Discovery Channel are what might keep them from appearing next season.

Kelli Kilcher’s overall health does remain favorable. She acknowledged as much during a Facebook Q&A last autumn, just as Alaska TLF Season Five was getting underway.

In response to a fan’s comment about dietary aids for people diagnosed with MS, Kelli said “I am doing the gluten free diet with only homestead beef and fish mostly. I am way more active during the summer and I find I feel way better doing it.” And, when asked about how the transition to the Kilcher homestead was going, Kelli brought her health up once more: “I’m feeling pretty good. Doing a healthier diet and trying to loose weight of course. Got the meds lined up that seem to be helping.”

In addition, she certainly seemed happy about participating in Alaska: TLF when asked directly about it. “It’s great that people enjoy our amazing family,” she said, responding to a question about the show’s increasing popularity. “It’s fun to see how people love it!”

From the other side of things, Shane recently shared an update featuring his progress on the cabin:

And, on a somewhat related note, Shane and Kelli Kilcher have been expanding their social media presence over the past few days — which has made them more accessible for fans, but has also fueled questions about whether they’ll be associated with Alaska: The Last Frontier from now on.

Regardless, you can now keep up with Shane Kilcher on Instagram, and with Shane and Kelli Kilcher on Facebook through their brand-new official fan page.