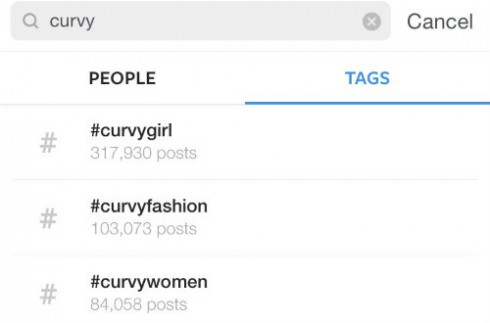 Don’t bother hashtagging your bootylicious Instagram posts as #curvy: As of this week, the social sharing app has removed the search function for that term. Instead, users are directed to other hashtags, such as #curvygirl, #curvyfashion and #curvywomen.

“Please note that the decision to block this hashtag has nothing to do with the term ‘curvy’ itself,” an Instagram spokesperson told Today, explaining it “was being used to share content that violates our guidelines around nudity.”

“They have banned images of breast feeding, stretch marks, domestic images of menstruation and classical art works that respectfully portray nude women and now they ban the hashtag #curvy,” activist Sam Roddick said during a panel discussion this week, via The Huffington Post. “[But] they allow b*tch, fat, slag, hookers, thin — this is not a safe platform for women and especially young girls.”

Others are fighting back by hashtagging #curvee instead. Using that term, one said, “Dear Instagram, you may have taken away our #curvy but you’ll never take our curves! FREEEEDOM!”

Do you think Instagram’s new policy is ridiculous or are the critics overreacting?