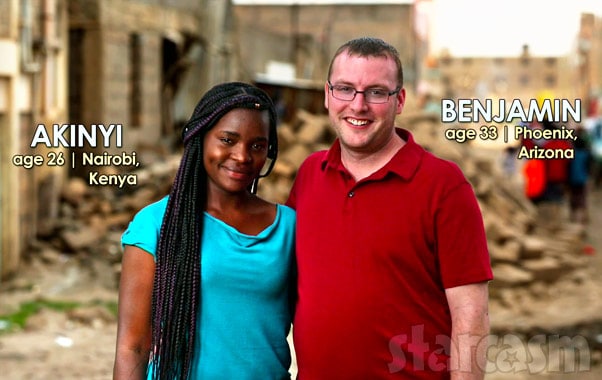 90 Day Fiance: Before the 90 Days couple Benjamin and Akinyi have encountered quite a few obstacles on their path to a happily ever after. In addition to the 9,000 miles separating them, there is also the cultural divide, Akinyi’s affinity for the world’s strongest margarita, a hefty “bride price,” and the fact that Benjamin is a poor, divorced, single dad.

So, did the couple overcome those obstacles and continue on with their plans to get married and have Akinyi come to America on a K-1 visa? And what does Benjamin’s ex-wife, and mother of their six-year-old son Grayson, think about all this?

DID BENJAMIN AND AKINYI FILE FOR A K-1 VISA?

According to Benjamin’s Visa Journey page, he filed an I-129F form in April of this year. The I-129F is the first step in the K-1 visa process. According to NOLO.com, the price for filing Form I-129F in early 2019 was $535. Hopefully, Benjamin worked out a deal where the visa expenses would come out of the bride price.

To help explain its significance, here’s more info on Form I-129F from All Law:

The Petition for Alien Fiancé(e), on Form I-129F, is the first step in this process. It allows you to notify U.S. Citizenship and Immigration Services (USCIS) that you are engaged to someone from another country, to demonstrate your intentions to marry, and to set in motion the process by which your fiancé(e) will receive the appropriate visa: the K-1 fiance visa.

The Visa Journey page indicates that the I-129F was approved with a second Notice of Action on July 30. The next step in the process is for the National Visa Center (NVC) to acknowledge receipt of the application. After that, there is more paperwork as well as an interview process for both parties. If all that goes through, the K-1 visa will be approved!

WHAT DOES BENJAMIN’S EX-WIFE THINK?

Benjamin’s ex-wife is on Instagram, and she has been sharing commentary on the show this season. Most of her comments are just poking fun, but she did share a lengthy post addressing Benjamin and Akinyi’s relationship and Akinyi potentially becoming Grayson’s step-mom:

When my current partner met my son, he met him as a friend. He got to know him and grow to understand what he meant to him. My son is smart and he told ME that my partner was his step dad. (I’m sure confirmed through school family tree building). I’m deeply concerned when someone pushes a person into a role they are not prepared for mentally. If he wants this relationship to work he will let her guide that pace.

Let her get acclimated with a new country and life before shoving the role of stepmom on her. Just my 5 cents.

IS BENJAMIN A FULL-TIME DAD?

Benjamin talks about how important his son is, and how he is focused on being a great dad. But, according to a new report, Benjamin might not be winning any sort of “Dad Of The Year” award any time soon. Instagrammer @FraudedByTLC has a rather extensive track record of tracking down reliable sources close to cast members, and the account raised some eyebrows after recently sharing some unflattering claims about Benjamin.

He is terrible with money. He got his car repossessed and has been evicted from several apartments for non-payment of rent. That’s why he lives with his pastor.

He has always been religious, but rocking in a corner singing Jesus hymns is a whole new level of religious. Might be TLC playing it up for the show.

He used to drink regularly. Not a drunk by any means, but would drink with his ex.

He is super controlling. The controlling nature we have seen recently on the show is 100% his true self.

According to multiple sources, he sees his son on weekends; Friday evening until Sunday about 3pm when he has watch parties for 90 Day with his church. Except on weekends when he goes to NYC for the #TellAll or to Meet and Greets with David, Annie, and Corey.

He pays zero in child support.

Hmmmm…So Benjamin is willing to pay a bride price but not a child price? And he lives with his pastor?! (Allegedly.) What a mess! As in, what a “I’m beginning to feel quite confident TLC will have Benjamin and Akinyi on another season” mess!

To keep up with Benjamin and Akinyi’s on-screen story, be sure to keep tuning in for new episodes of 90 Day Fiance: Before the 90 Days, airing Sunday nights at 8/7c on TLC!

BEFORE THE 90 DAYS Ash asked Tom to slide into Avery’s DMs, she agreed to a date REPORT

90 Day Fiance The Other Way spoilers: Do Tiffany and Ronald get married?