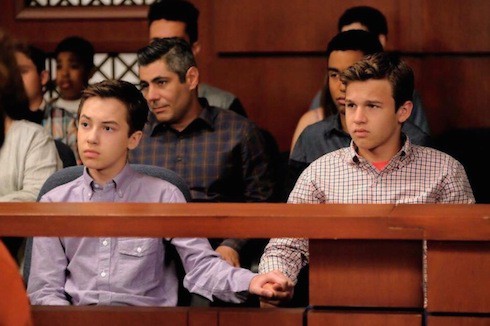 Byerly, 15, and MacIntosh, 16, have won praise from almost every corner thanks to their subtle depictions of Jude and Connor. The kisses they’ve shared on The Fosters are often called breakthroughs for young actors across the board–particularly since they’re believed to be the youngest same-sex kisses in the history of television:

In a Buzzfeed interview from 2015, Byerly addressed the difficulties he first encountered playing a gay character, since, in his words, he’s never questioned his sexuality. “I never [wondered], in the back of my mind…if I was gay or straight,” he told the publication. “I kind of always knew I liked girls. I never had those struggles of figuring it out, I never had those struggles of coming out to your parents and telling everyone and accepting this fact about yourself that so many people don’t.”

Byerly also acknowledged, in a separate interview, that it wasn’t easy to come to terms with the fact that Jude and Connor from The Fosters were going to kiss–nor was it easy for MacIntosh to film these scenes. “It was a long time of kind of coming to terms that we’d be kissing each other,” he said, “[but] Gavin and I started thinking about all the different people that would be watching this and the difference that it would make in the world. If that’s the motive of what you’re doing then you have a pretty good reason to do it.”

And, ultimately, thoughts of real-life children like Jude were the reason Byerly pushed forward with the role:

It was very important to portray a character that is going through a struggle that so many people go through. I want people to watch the show and see the struggle that Jude goes though and feel more comfortable about themselves; to feel like it doesn’t matter whether you are gay or straight or bisexual or transgender or whatever you are, that you are happy with who you are, and that you are accepting of yourself. My hope is that people watch the scene and they are happy to see something on television that represents them. They can see themselves on television and say, “I’m just like Jude, I go through these struggles, I’m so curious about my sexuality, I’ve been through the foster system.” And they’re happy they can see that in front of so many people and feel as though it’s okay, and it’s not a bad thing. 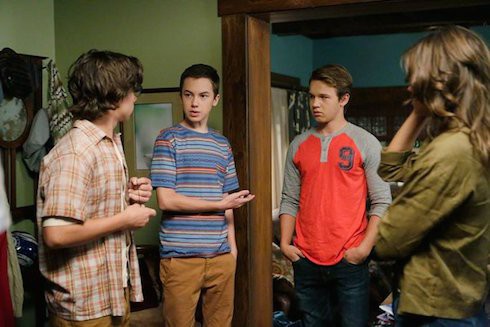 Byerly’s Jonnor co-star MacIntosh, in a brand-new interview with The Advocate, said that he’s proud of the steps he and Hayden have taken as Jude and Connor from The Fosters, because they’ve helped make him a more socially conscious person:

I really wasn’t aware that my character could make such an impact on viewers. The kiss was very, very important. It was a groundbreaking thing, and I think it showed the two characters’ relationship more emotionally than sexually….There are a few television shows that are out there that portray gay characters, but I think the reason why Connor’s relationship is so different is because of the age. No one speaks for the young LGBT community, or if they do, it’s a very minimal group. I’m glad that I’m the person that gets to be able to do that.

Of course, Hayden and Gavin are both frequent social media users. Here’s Hayden’s most-recent picture of he and his girlfriend:

Although I’m sad to leave, I can happily say that I had a great first time in San Francisco with the beautiful @alyssajirrels and I’m sure I’ll be back soon.

And, for good measure, here’s Gavin and his girlfriend:

1 year with this girl ❤️ @brookesorenson A photo posted by Gavin MacIntosh (@thegavinmacintosh) on Oct 30, 2015 at 9:11pm PDT

LHHATL Prince Carter calls out TSR for alleged anti-gay bias: ‘I will pray for them’