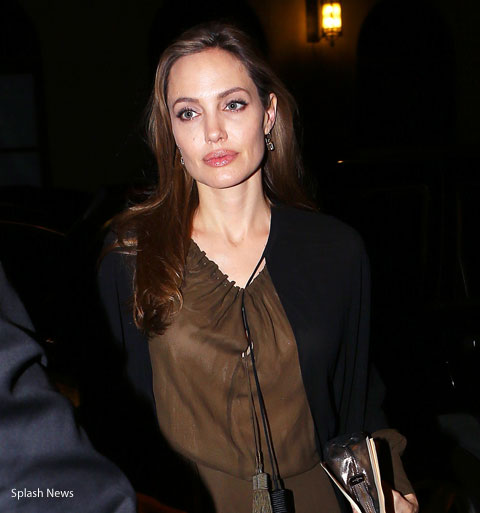 Angelina Jolie April 4, 2013 in the middle of her procedures.

After losing her mother Marcheline Bertrand in 2007 at age 56 after a 7 year battle with ovarian cancer, Angelina got tested and found that she carries a gene that makes her more genetically disposed to both ovarian and breast cancer.

We often speak of “Mommy’s mommy,” and I find myself trying to explain the illness that took her away from us. They have asked if the same could happen to me. I have always told them not to worry, but the truth is I carry a “faulty” gene, BRCA1, which sharply increases my risk of developing breast cancer and ovarian cancer.

After starting February 2 with a “nipple delay” procedure, Angelina finished the last of the procedures needed for the mastectomies April 27 while quietly staying under the radar.

Around Valentine’s Day the A-list actress “had the major surgery, where the breast tissue is removed and temporary fillers are put in place. The operation can take eight hours. You wake up with drain tubes and expanders in your breasts. It does feel like a scene out of a science-fiction film. But days after surgery you can be back to a normal life.”

Angelina says her long-time partner Brad Pitt has been a huge support during her procedures and recovery, and says the experience has brought them closer together. “So to anyone who has a wife or girlfriend going through this, know that you are a very important part of the transition. Brad was at the Pink Lotus Breast Center, where I was treated, for every minute of the surgeries. We managed to find moments to laugh together. We knew this was the right thing to do for our family and that it would bring us closer. And it has.”

Angelina says she doesn’t feel any less of a woman, and is happy with the implants she got to replace the breast tissue. “There have been many advances in this procedure in the last few years, and the results can be beautiful,” she notes.

“I wanted to write this to tell other women that the decision to have a mastectomy was not easy. But it is one I am very happy that I made. My chances of developing breast cancer have dropped from 87 percent to under 5 percent. I can tell my children that they don’t need to fear they will lose me to breast cancer.”

The Little Couple’s Jen Arnold’s in remission from choriocarcinoma!