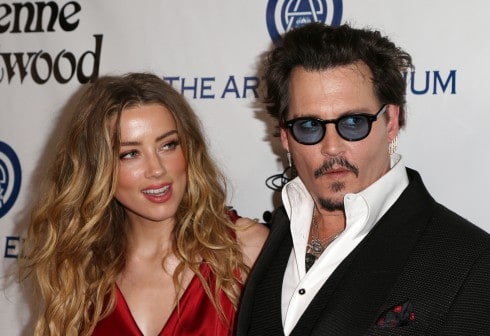 Earlier this week, it was announced that the short-lived marriage between Amber Heard and Johnny Depp was coming to an end. The actress filed divorce papers just days after Depp’s mother passed away leading many to question the motivations behind the split.

Now, Amber’s coming forward to claim she’s a victim of domestic violence and has the pictures to prove it. TMZ as well as People obtained a picture Amber recently presented in court. She appears red and bruised around her right eye— an injury she says Depp inflicted on her.

Depp’s mother passed away last Friday and on Saturday, the altercation occurred between Amber and Johnny. According to TMZ, she says he hit her in the face with an iPhone. Appalled by Johnny’s behavior, Amber filed paperwork first thing Monday morning.

After the incident occurred, Amber says she was offered money as a bribe to stay quiet about the fight but decided to file for a divorce instead. Thus, the reason for the unfortunate timing of filing divorce papers shortly after his mother’s death.

As a result of her injuries, Amber is filing a restraining order against Johnny claiming “there’s an immediate threat of harm.” According to Heard and her lawyer, Johnny was physically violent with her throughout their 15 month marriage.

Johnny’s rep has provided a statement regarding Amber’s claims against him:

Given the brevity of this marriage and the most recent and tragic loss of his mother, Johnny will not respond to any of the salacious false stories, gossip, misinformation and lies about his personal life. Hopefully the dissolution of this short marriage will be resolved quickly.

The relationship between Johnny and Amber has always been tumultuous. Just months after the pair wed, rumors were already beginning to circulate that their marriage was on the rocks.