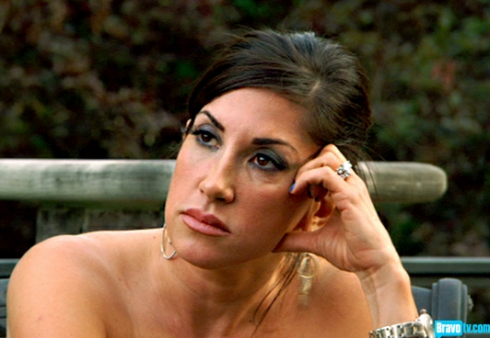 Teresa Giudice has claimed for months to be doing whatever it takes to get her family back together. However, as viewers of the show are beginning to realize, she doesn’t appear to really be doing it. Even her former best friend, Jacqueline Laurita has decided to cut ties with her completely. What’s in it for us? Plenty of gossip about what Jacqueline really thinks about Teresa Giudice, and why she decided to end their friendship.

Although Jacqueline thought of herself as one of Teresa’s best friends, the more she saw in the press, the more she began to realize she hardly knew her at all. “I was very confused, because I was reading one thing in the tabloids about her life and then I was seeing something completely different in the way she was living in her real life,” she explains in her Bravo TV blog. As her co-stars pointed out on Real Housewives of New Jersey, Teresa was claiming bankruptcy but at the same time, she was renovating her house. Things were not adding up.

There has been plenty of tabloid drama on the show surrounding Teresa and while she claims to be all about family, she makes negative statements about them whenever given the chance. Jacqueline explains, “Teresa would do little things to try to sabotage her family and friends like putting things about them in articles, sabotaging potential business opportunities, etc. all while claiming that she wanted to be one big happy family again.”

All the while, Jacqueline tried to be a good friend to Teresa, and be there for her if she needed her — that’s why she wanted to talk to her about her money issues. She also had tried to encourage Teresa to go to therapy with her brother in hopes that they could work out their differences. “I truly cared and wanted them to get past their issues, but Teresa would never let up or let go of anything and then she would put the blame entirely on everyone else without taking any accountability for her own actions.” In the end, Jacqueline explains, “I couldn’t get through to her, and it was getting harder and harder to justify her behavior and explain mine.”

As fans saw on Sunday night’s Real Housewives of New Jersey, Jacqueline explained to Teresa that she needed to distance herself from her and her family. Their issues were weighing on Jacqueline and their friendship had been on the rocks for weeks. How can she a good friend to Teresa if she wasn’t being honest with her?

Jacqueline also explains why Teresa’s relationship with Danielle Staub had offended her so much. Teresa had called her out for being civil with her but then did the same thing. As Jacqueline says, she wasn’t playing by her own rules. The same thing applies to her family issues. Teresa claims that they are stuck in the past and won’t move forward and yet when Joe admits he hasn’t been perfect and wants to go to therapy to get through it, she refuses.

On top of not being honest with Jacqueline, Teresa even tried to come in between her relationships with the other cast members. She says that Teresa would ask her things such as, “Whose side are you on, my side or Melissa and Kathy’s side?” and, “If I am your friend, why won’t you call them out?” and, ” If you were MY friend you would say (this) or (that)!”

Do you think Teresa is digging herself into too deep a hole with her friends and family? CLICK here to read her side of the story.

Find out when season 4 of Real Housewives of New Jersey continues every Sunday at 10/9c on Bravo.

The Governator fathered a child with household staff

Mel Gibson and Oksana Grigorieva call it quits just five months after having a child!

Why isn’t Jacqueline Laurita on the Reunion Special for The Real Housewives of New Jersey?