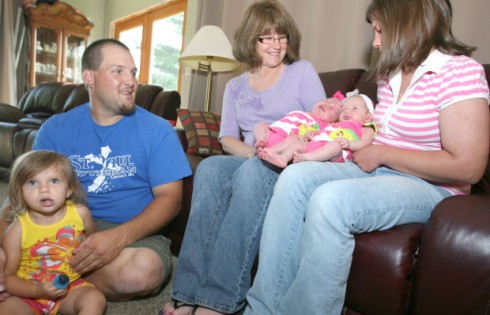 Usually, you hear moms complain about “those nine months I spent carrying you.” Now, one grandmother has the ultimate trump card: She carried her daughter, her first granddaughter and then two more twin granddaughters. For those keeping track, that’s 27 months of pregnancy for the sake of her one daughter.

It’s really a sweet story: The biological mother, Ashley Larkin, is unable to bear children because of pulmonary hypertension. Her mother, Susie Kozisek, knew Ashley desperately wanted to have children with husband Jay, so Susie offered to serve as a gestational surrogate for her daughter and son-in-law.

“I just felt really privileged and honored to be able to help,” Susie told the local Globe Gazette. “I think everybody would do whatever they can do for their children.”

After getting the go-ahead from her doctor, 50-year-old Susie was impregnated with an embryo created through in vitro fertilization. She gave birth to Harper, her technical granddaughter, nine months later. 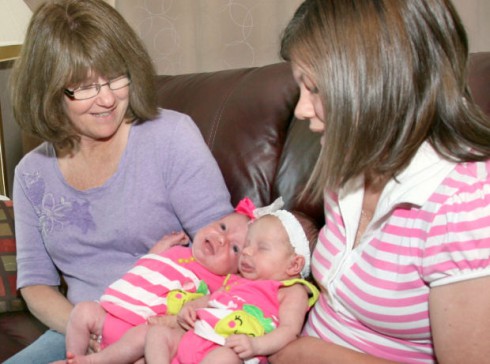 “They are miracles,” said Ashley. “They’re good babies, too. They’re content to sleep a lot.”

Susie’s health throughout the pregnancies was also fairly miraculous. Even though she was in her 50s, she was able to work an office job up until one week before the twins’ birth. She also didn’t encounter gestational diabetes or high blood pressure, which are more common consequences of pregnancy at an advanced age.

Now that she’s settling into a more traditional role as grandma, Susie said she has absolutely no regrets.

“It means the world to me,” she said of her daughter and son-in-law’s family. “I just wanted them to have the chance to be parents. They’re very good at it.”