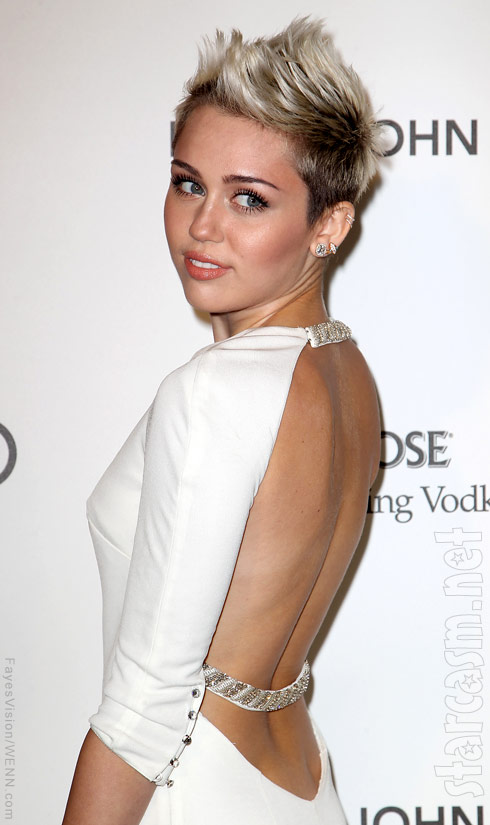 Miley Cyrus and Liam Hemsworth announced they were engaged in the summer of last year after dating for nearly two years. The lovebirds have been going steady ever since and some reports even claim that they have already tied the knot. However, after Liam reportedly got cozy with actress January Jones, things reportedly took a turn for the worse, and now Miley isn’t wearing her ring! They seem to be on the rocks but have Miley and Liam really ended their engagement?

Earlier this week, Life & Style reported that Liam had been seen getting close with January during a pre-Oscar bash last month. “They went to a private house party, and right in the middle of the party, January was clinging to Liam, saying, ‘You’re so handsome,'” a guest told the magazine. “He kept saying, ‘We can’t do this here.’ Then they left holding hands and went out in the hallway and were making out. She was wasted. It wasn’t good.”

The news obviously didn’t sit well with Miley — especially after dealing with Liam’s “wandering eye” before. Rumor has it that the reason Miley and Liam split for a short time back in 2010 was because he had hooked up with a few other women.

Yesterday afternoon, Miley tweeted about the rumors, seemingly denying that any cheating took place by assuring fans her wedding to Liam was still on. “I am so sick of La. And sick of the lies that come with it. I didn’t call off my wedding. Taking a break from social media. #Draining.”

She followed that up with two more tweets that would suggest she is going to let her music speak for her instead of her 140 characters or less statements: “my new music is gonna shut everyone up,” she wrote first, and then “not discussing anything but my music from now on.”

The lady doth protest too much, methinks! And Miley seemed to stir the gossip flames she claims to resent so much by going out last night without her engagement ring! It’s mixed signals to say the least. Well, if Miley was truthful in her tweets, then perhaps she is taking a lesson from Taylor Swift and we’ll learn all about what is really going on between her and Liam in a new song!