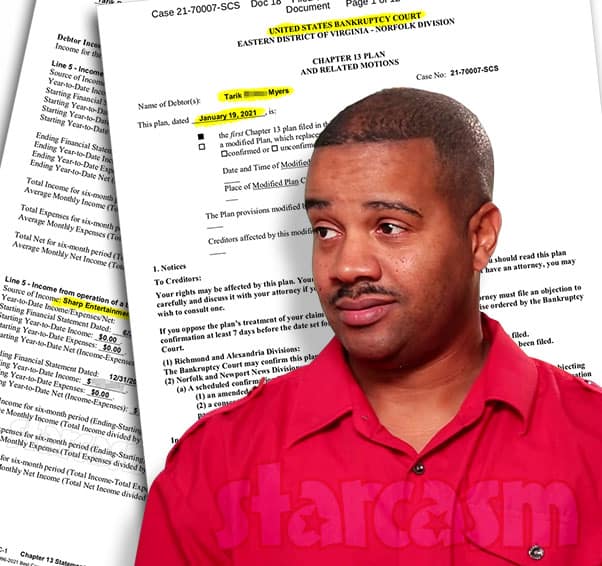 90 Day Fiance: Before the 90 Days and Pillow Talk star Tarik Myers is having some serious financial issues. The rapper and reality star filed for bankruptcy last month with close to half a million dollars in financial liabilities. And it appears as though his financial problems began well before the COVID-19 pandemic, as evidenced by him owing more than $124,000 in state and federal taxes!

Unlike his 90 Day Fiance co-star “Big Ed” Brown, Tarik filed for bankruptcy under Chapter 13. That means that he has steady income and intends to try to pay off his debts.

More on Chapter 13 from USCourts.gov:

A chapter 13 bankruptcy is also called a wage earner’s plan. It enables individuals with regular income to develop a plan to repay all or part of their debts. Under this chapter, debtors propose a repayment plan to make installments to creditors over three to five years. … During this time the law forbids creditors from starting or continuing collection efforts.

One of the biggest advantages of filing for Chapter 13 bankruptcy is that it can keep a property from going into foreclosure. “By filing under this chapter, individuals can stop foreclosure proceedings and may cure delinquent mortgage payments over time,” US Courts states. “Nevertheless, they must still make all mortgage payments that come due during the chapter 13 plan on time.”

There was a “Foreclosure | Trustee’s Sale” posting for Tarik’s home in a local Virginia newspaper back in November. That listing has since been removed.

Here are some interesting tidbits from the bankruptcy filing, including the amount of money Tarik says he made from the show last year:

• Tarik’s Saturn was repossessed, but he still owns a couple of classic cars from the 1960s that are listed as “inoperable.”

• The list of property exemptions includes a handgun, $800 worth of apparel and costume jewelry, $150 wall art, two gold necklaces with a combined value of $900, and ownership of the song “God Bliss Woman” that is valued at $25.

• Tarik lists his occupation as exhaust hood tech and says he has been doing that job for ten years.

• Under “other monthly income” Tarik says he makes just over $1,400 a month from “TV show payments.” Tarik clarifies in another part of the filing that he made just over $17,000 from Sharp Entertainment (the 90 Day Fiance production company) between June and December of 2020.

• After subtracting Tarik’s monthly expenses from his monthly income, he is left with $800 in monthly net income.

• Tarik states in the filing that he makes a monthly “support payment” to his “son-in-law” Harry in the Philippines. (I assume that should be stepson.)

• The form asks for income information for Tarik’s wife Hazel, but he answered all of those questions with zeroes.

#90DayFiance #BeforeThe90Days Big Ed filed for bankruptcy in 2004 with financial liabilities in excess of $133k+. He apparently went right back to buying lingerie & 1,000 thread count sheets because he had liabilities of $185k+ when he filed again in 2017. https://t.co/7BfvDqwO7H pic.twitter.com/9XBltnmSNk

The bankruptcy filing is still in the process, and one of the debtors has already filed an objection. A bank with the trust deed on Tarik’s home filed the objection last week and argued that “the proposed Plan does not set forth a reasonable schedule and time period for payment of arrearages on the deed of trust.”

Filing for bankruptcy is nothing new for Tarik. He filed for Chapter 13 bankruptcy in October of 2008 and then again in March of 2009.

If you’re wondering how he was able to file twice in such a short period of time, that was apparently a mistake on his part. The second filing was dismissed by a judge when it was discovered that Tarik had another open filing. In the dismissal, it is revealed that Tarik “appeared and explained that he filed [the second case] to halt a foreclosure. ”

Despite filing for Chapter 13, Tarik would later change his initial 2008 filing to Chapter 7. That filing looks to have been approved with a Discharge of Debtor signed by a judge in November of 2009.

#EXCLUSIVE #BeforeThe90Days Season 2 star Tarik is a rapper from Virginia Beach who refers to himself as "the Black Anthony Bourdain." Check out our #evuhdense binder on Tarik, including samples of his rapping under the names Dirt DayOH and Dirt Bourdain: https://t.co/VqAzs7Mjjp

I first saw mention of Tarik’s bankruptcy filing via John Yates on Instagram.