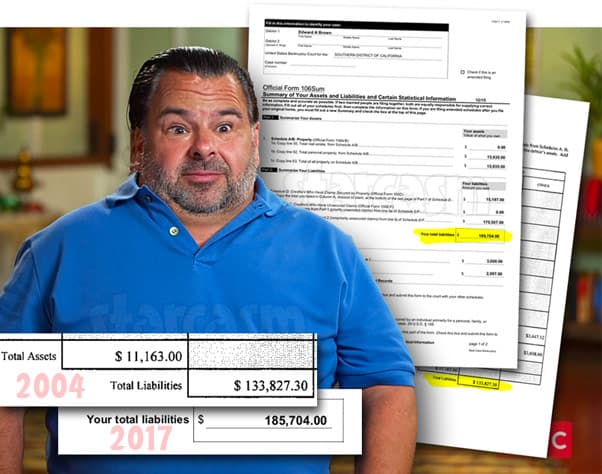 90 Day Fiance: Before the 90 Days star “Big Ed” Brown might need to change his name to “Big Debt” Brown! The 55-year-old reality has had some serious money management problems over the years, resulting in two separate bankruptcy filings in 2004 and 2017.

The scoop on Big Ed being in the big red was first reported by @celebtm on Instagram. We tracked down the two bankruptcy filings and can add some additional details.

In the 2004 Chapter 7 filing, Big Ed says that all he had was $20 in cash and $63 in his personal checking account at the time of the filing. He filed for an exemption on $4,383 worth of personal property, including clothes, household goods, tools, and a $700 watch.

Big Ed claimed a total of $133,827.30 in secured and unsecured debt. Here’s the complete list of debts from the filing:

Big Ed states in the filing that he was making $4,763 a month gross, and taking home just under $3,500 a month at the time. His expenses, which included $1,000 a month for rent and $400 a month for student loans, totaled $3,608.00 a month. That amount also includes $250 a month for alimony and/or “payments for support of additional dependents not living at your home.” His daughter Tiffany was 13 at the time.

The bankruptcy order was approved on September 2, 2004. 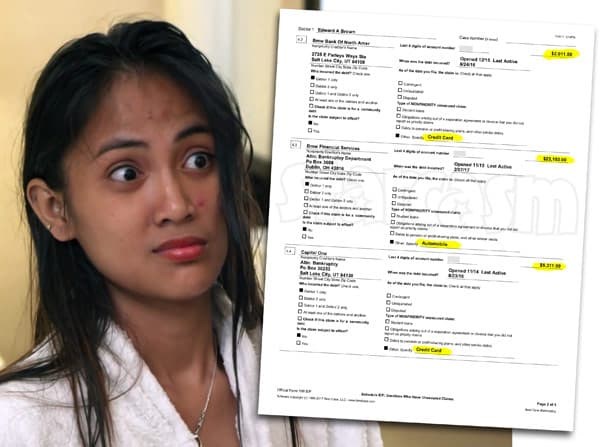 Apparently Big Ed did not learn his lesson, and he was back in California bankruptcy court 13 years later with a much larger debt. This time around he had no cash on hand, but his personal checking accounts had increased to a whopping total of $235.

The filing states that Big Ed had liabilities totaling $185,704.00 this time around. Here’s how that broke down:

We recap the HUGE fight between #BabyGirlLisa, #BigEd & Avery from the leaked #90DayFiance #BeforeThe90Days Couples Tell All footage, including some very serious allegations made by Lisa and Big Ed! 😳 (I'm guessing most of this won't make it to TLC.) https://t.co/OdrBGAWFDr pic.twitter.com/10DTZLuB7h

I looked into Chapter 7 bankruptcy filings and they usually do not include forgiveness of student loan debt. To get that you have to file an adversary proceeding and demonstrate that repayment would impose undue hardship on you and your dependents. I don’t see any record of that in either of Big Ed’s filings, but it could very well be that I don’t know where to look.

The 2017 form asked “When was the debt incurred?” and Big Ed answered: “Opened 12/04 Last Active 05/17.” So the student loan account was opened just a few months after his previous bankruptcy was approved. It could be that funds were transferred to another company, thus creating a new account. It’s unclear.

Also interesting is that one of the credit cards listed (Capital One) was opened in March of 2005. How do you get a credit card six months after filing bankruptcy? Is it just a matter of agreeing to a low limit and a crazy high interest rate?

Big Ed’s income during this time is a bit confusing. Here are two different figures from the filing:

Fill in the average monthly income that you received from all sources, derived during the 6 full months before you file this bankruptcy case: $4,192.67

However, in the “Current Monthly Income Details for the Debtor” section of the filing, it appears that Big Ed may have been unemployed from January-March before being hired at the $3,000-a-month rate? Here’s a screen cap: 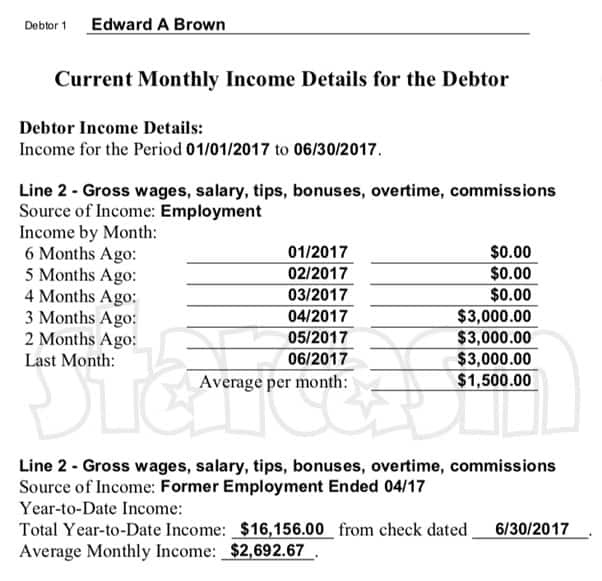 In summary, it appears as though Big Ed should have been texting Rose’s sister asking for money! And it’s too bad for any of his future dating prospects that they don’t make a mouthwash that covers up bad credit.

You can keep up with Big Ed’s exotic international love adventures with new episodes of 90 Day Fiance: Before the 90 Days airing Sunday nights at 8/7c on TLC.