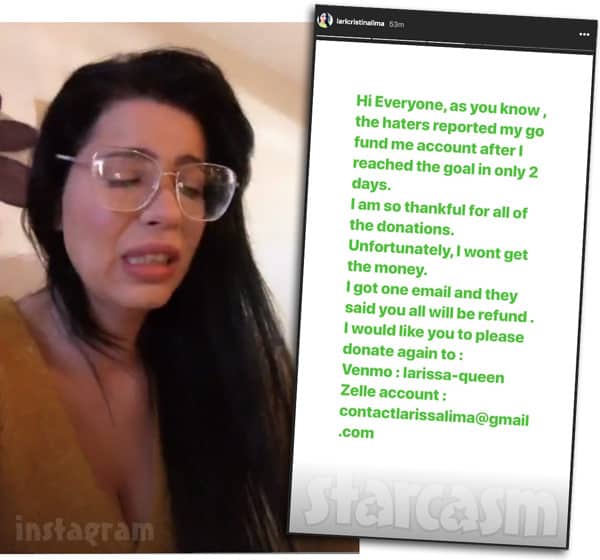 90 Day Fiance star Larissa Do Santos Lima’s horrible weekend has somehow gotten worse. The 32-year-old reality star was arrested and charged with domestic battery early in the AM hours on Friday stemming from a bloody altercation with her husband Colt Johnson after she discovered that he had purchased pornography. Colt filed for a divorce later that day — a clear indication that he did not plan to help her out with her legal situation.

Thankfully for Larissa, a friend was willing to set up a GoFundMe campaign to raise money for her bail and legal fees. After initially setting a goal of $5,000, the goal was later dropped to $3,000 — which was met very quickly. Larissa’s good news was short lived, however, as the campaign was reported and GoFundMe deleted it.

Just after the 90 Day Fiance Season 6 Couples Tell All aired on Sunday, Larissa took to Instagram Live and tearfully explained to her fans that the GoFundMe campaign was removed after being reported by “trolls.” She assures everyone who donated that GoFundMe will issue them a full refund before getting very emotional and revealing that she needs to ask people to donate again. (If you were curious, it appears as though Larissa is staying st her friend Carmen’s house.)

She later shared some text graphic posts explaining what happened and how folks can send her money. Here are the details:

Hi Everyone, as you know, the haters reported my go fund me account after I reached the goal in only 2 days. I am so thankful for all of the donations. Unfortunately, I won’t get the money. I got one email and they said you all will be [refunded]. I would like you to please donate again to my PayPal or my Zelle account. Email for donations: contactlarissalima@gmail.com 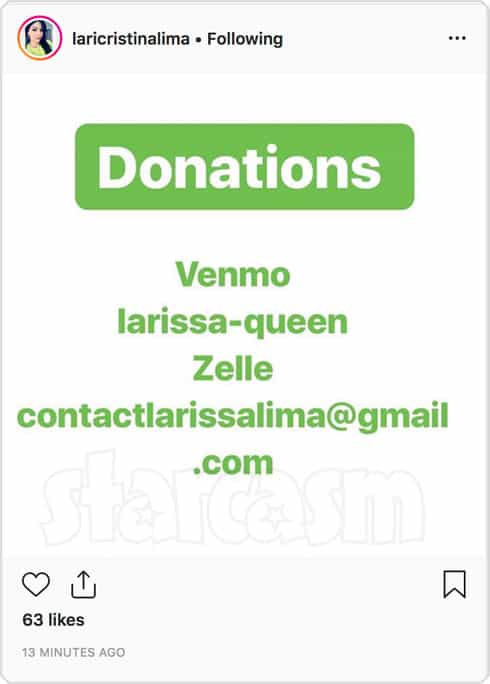 Taking a cue from public radio and TV, Larissa offered an incentive prize for anyone donating more than a set amount. “For everyone who donates $50 USD or more, I will make a [personal] video for you or for your [loved] one,” she wrote.

I thought it was rather odd that “trolls” and/or “haters” managed to get Larissa’s GoFundMe campaign removed. Regardless of whether or not people think she deserves to have people send her money, the campaign seemed very straight forward about what the money was for, so I didn’t understand why it was removed.

I checked out the site’s Terms of Service and found a list of “examples of Content and/or use that is illegal or prohibited by GoFundMe” that includes the following:

campaigns we deem, in our sole discretion, to be in support of, or for the legal defense of alleged crimes associated with hate, violence, harassment, bullying, discrimination, terrorism, or intolerance of any kind relating to race, ethnicity, national origin, religious affiliation, sexual orientation, sex, gender or gender identity, or serious disabilities or diseases

Although Larissa’s campaign was for the legal defense of a crime associated with violence, I think it would be a stretch to say that it was essentially a hate crime. In other words, Larissa didn’t allegedly attack Colt because he was a man. I wish Larissa had shared her email from GoFundMe — I assume it provided some sort of specific reason why her campaign was removed and the funds denied.

It’s still unclear if Colt intends to press charges this time — something he elected not to do with both of Larissa’s previous arrests. Regardless, Larissa is in a very difficult legal situation that means she needs help from a divorce attorney, a criminal attorney, and an immigration attorney. $3,000 will be gone instantly if she really has to hire three lawyers!

Meanwhile, Colt has responded to Larissa’s arrest and her comments about it with an Instagram post of his own. He shared a photo of some trash bags, cardboard boxes, and a plastic bin along with a statement: 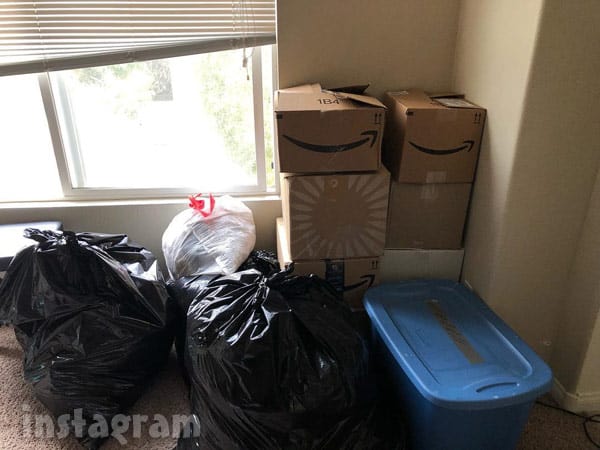 I don’t understand my soon to be ex wife. She comes to America with literally nothing. The suitcases she used for travel I provided for her. On her arrival I already had clothes waiting for her to wear and everything she needed to start a basic life in America. Over the course of months I continued to provide for her, gave her shelter, food, and supported her wants and dreams. When she wanted a dress or makeup I bought it for her. When she wanted to take ESL classes I found a class for her and drove her. When she wanted to go to a gym I took her to every gym in town and eventually she joined two gyms simultaneously. When she needed a doctor, lawyer, therapist I would always do what I could for her. My sole mission since her arrival was to see that she was happy, taken care for and nurtured. When she wanted to start her business I gave her a thousand dollars just to start. Every time she was in trouble, I was there.